With Kris Kobach controlling his immigration message, Mitt can't move to the center 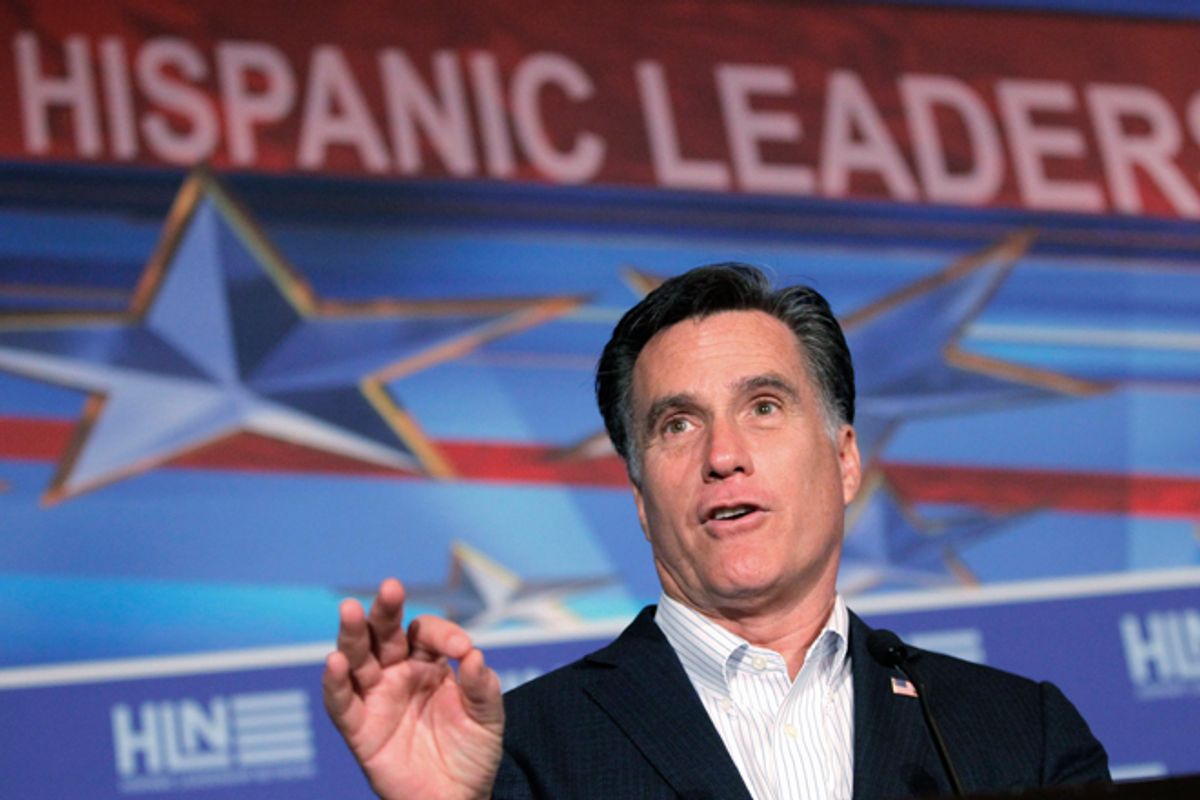 How do you say "pivot" in Spanish? Cambiar su postura. No sooner had Mitt Romney sewn up the Republican presidential nomination, than he did just that, offering messages tailored to appeal, not to just Republican primary voters, but to general election voters of Mexican, Central American and Caribbean descent. The Obama campaign shadowed Romney's moves by launching "Latinos for Obama" yesterday and floating the cocky but not impossible idea that the president might carry Arizona in November with Latino help. After months of being ignored in favor of white conservatives, the Latino voter is now center stage in campaign 2012.

Romney's desire to maneuver is transparent. When he hired Ed Gillespie, former Bush White House pollster and immigration moderate, the Hill newspaper saw " a sign the campaign will heavily court Hispanic voters — perhaps at the expense of immigration hard-liners in the party." Then Romney allowed himself to be overheard telling supporters that “we have to get Hispanic voters to vote for our party” and warning that overwhelming Hispanic support for Obama “spells doom for us." He also mouthed approving sounds about Marco Rubio's pitch for a Republican version of the DREAM Act. Republican immigration advocate Tamar Jacoby pronounced herself "thrilled."

But the perils of the pivot emerged when Romney's campaign tried to Etch A Sketch away the candidate's working relationship with Kris Kobach, the Kansas secretary of state and immigration hard-liner. It was Kobach who persuaded Romney to advocate "self-deportation" as the solution to the presence of 11 million undocumented immigrants in the country. When a campaign spokesperson told Politico on Monday that Kobach is not a campaign "advisor" but a "supporter," Kobach responded by telling Think Progress that his relationship with the campaign has not changed. Then he upped the ante by telling WaPo's Greg Sargent that Rubio's idea is an unacceptable variation on amnesty and he expects Romney to reject it.

How long can Kris Kobach maintain de facto control of Romney's immigration message? With Romney's Latino poll numbers sinking toward single digits and Gillespie taking a larger role in the campaign, it may not be long. Restrictionist blogger Mickey Kaus thinks Romney is most likely to make a "targeted concession" such as backing a variation on the DREAM Act. Rubio, by most accounts, is planning to introduce a bill to legalize the status of high-achieving undocumented students in coming weeks with an eye toward forcing a Senate floor vote in the fall.

Both pro-and anti-immigration advocates deride Rubio's idea as a stunt, and, depending on its language, it may be.  But the Romney campaign has no better card to play. "The dreamers," as the students call themselves, are held in high esteem by the Latinos, nine out ten of whom  support for the DREAM Act. And fortunately for Romney, two leading student groups that have fought for the DREAM Act say they are open to Rubio's idea.

"We definitely support the concept," Mohammad Abdollah of DreamActivist.org told Salon. "From everything we've heard, it sounds like something we could support. We need relief. If it comes from a Democratic or a Republican proposal, for us it doesn't matter."

Gaby Pacheo of United We Dream, which is supported by the Service Employees International Union, which has endorsed Obama, was more cautious.

"We're willing to entertain the idea," she said. "We're glad to see a Republican coming forward on this issue. We want to see what the bill says and who are the Republicans who will also support it. Rubio is going to need support not just in the Senate but in the House as well. Where are Mitch McConnell and John Boehner?" The message seems clear. Without Republican support in the House, Rubio's measure cannot become law and if it can't become law it will get no help from its putative beneficiaries.

And therein lie the limits of Romney's ability to pivot on the immigration issue: his allies. To send Latino voters a new message in the fall, he needs the cooperation of Kris Kobach and the Republican congressional leadership, neither of whom is inclined to give it.

The anti-immigration forces say pandering to Latinos who won't vote Republican anyway will be less effective for Romney than running hard against Obama's economic record. This strategy has its limits too. The post-2008 downturn, it turns out, has been less severe for Latinos than for whites. A Pew Hispanic Center study found Latinos lost less than whites in the 2007-09 recession and gained more in the 2009-2011 recovery. Latinos are now gaining jobs at twice the rate of whites. So the economic issue is not as sharp as it might be. Besides, wrote Ali Noorani of National Immigration Forum in a column for Fox News, "no one is going to listen to your economic message if you want to deport their mother."

Obama's pitch to Latinos is an ethnically flavored variation on his general election message: I saved you from disaster and delivered benefits.

President Obama has spent the first three years of his term working to restore economic security to the middle class and Latino community. He's kept nearly 2 million Latinos out of poverty, doubled the amount spent on Pell Grants so 150,000 more Latino students can afford their educations. And by 2014, Obamacare will provide health coverage to 9 million Latinos who are currently uninsured.

Romney's pitch to Latinos? It's a work in progress.