"Sound of My Voice": A tense sci-fi puzzler 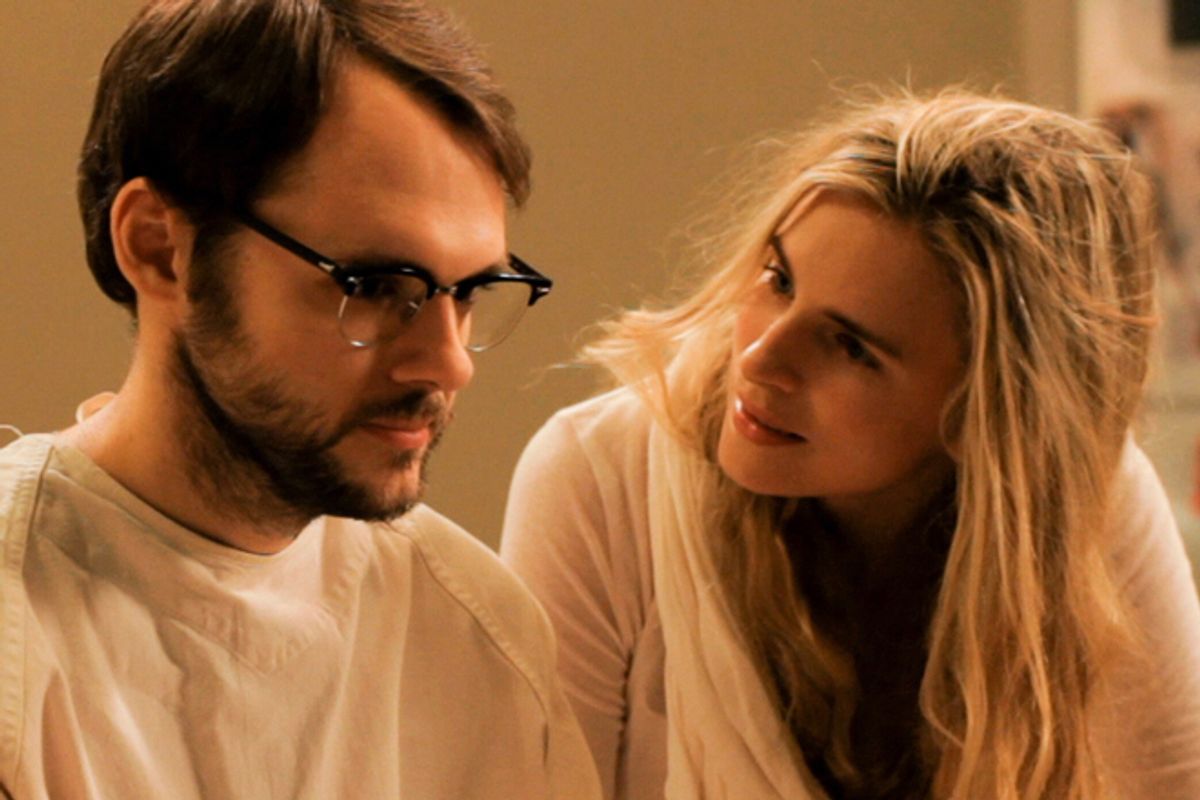 Christopher Denham and Brit Marling in "Sound of My Voice"
--

David Lynch likes to talk about "movies that make you dream," and he's made his share of them. (Whether any sane people wanted to share the dream that was "Inland Empire" is another question.) I've always preferred a more prosaic phrase: Movies that mess with your mind, using another verb in place of "mess." My personal view is that even when cinema apparently depicts the most quotidian reality, it poses a sort of epistemological challenge: How do we tell the difference between image and narrative and reality, when all we ever have to work with are mental constructions of those things anyway? There are the crowds who (supposedly) ducked in terror while watching the Lumière brothers' 1895 film of a train arriving at La Ciotat, and there are people who have Internet arguments about what "really happened" in "Memento" or "Mulholland Drive." Both are caught on the horns of the same dilemma.

Personally, I can hardly get enough of the WTF/OMG/we-all-live-in-Plato's-cave-my-mind-is-blown school of moviemaking. Not only was I a big fan of "The Matrix," but to this day I will also defend the even nerdier "Matrix Reloaded," Cornel West cameo and everything. ("Matrix Revolutions" -- let's all agree not to talk about that, OK?) One of my proudest achievements as a critic -- and I'm not kidding about this, even a little bit -- is that I wrote one of the very few positive reviews of "Donnie Darko" on its initial release, long before it became a dorm-room, bong-hit fave rave. Next week you'll probably get to read me expounding on Jacques Rivette's "Céline and Julie Go Boating," which is a drug-addled continental meta-narrative exploration from 1974, and I know you just can't wait.

I dig moderately cheesy sci-fi or horror that offers a peek behind the narrative curtain, like "Cabin in the Woods" or the underappreciated "Source Code," and I'm a huge admirer of Austrian director Michael Haneke ("Caché," "The White Ribbon," "Funny Games"), who offers the chilliest, most art-housey version of porous-reality cinema. There's Lynch, of course, and Christopher Nolan, of course, and we'll discuss my reservations about both of them some other time. I'm not going to defend M. Night Shyamalan's films on any grounds except sincerity and enthusiasm, but if I'm laid up with a bad cold or whatever, I'll happily watch any of them. (I'm not counting "The Last Airbender." OK, I'm not counting "The Village" either, it's just too stupid. But anything else, even "Signs.")

So I'm delighted to report that "Sound of My Voice," a low-budget cult-thriller puzzle that made a splash at Sundance in 2011, proves how effectively you can set the mind-bending mood without any special effects, action sequences or spectral rabbits. On its most fundamental level, "Sound of My Voice" is an L.A. character drama built around the unresolved erotic tension between a tall, otherworldly-looking blonde named Maggie (Brit Marling), a nervous would-be documentary filmmaker named Peter (Christopher Denham), and Peter's girlfriend Lorna (Nicole Vicius), a onetime Hollywood wild child gone straight. But when you throw in the fact that Maggie claims to be a time traveler from the year 2054, bringing word from a world half-destroyed by civil war and technological meltdown -- and that Peter and Lorna have set out to expose and debunk her -- things really get interesting.

Marling is a fascinating new arrival in movies, an actress with commanding screen presence who decided she could write roles better than the crappy ones agents were offering her. She co-wrote "Sound of My Voice" with first-time director Zal Batmanglij, at exactly the same time as she was writing another sci-fi indie, "Another Earth," with Mike Cahill. That one also had a cool premise, and Marling is magnetic in both roles, but I think "Sound of My Voice" is far more compelling as storytelling, blending its enigmatic sci-fi elements with a creepazoid cult drama somewhat akin to "Martha Marcy May Marlene."

Divided into numbered chapters that gradually heighten the tension, "Sound" presents a mystery that seems at first like hardly any mystery at all. Maggie's coterie of followers are standard-issue California New Age seekers, dressed in white robes. They arrive blindfolded in her secret basement hideout somewhere in the San Fernando Valley, where she keeps them in line with tried-and-true psychological manipulation, mixed with nostrums from the future that are so vague as to be meaningless. (When she is finally coaxed into singing a hit song from the 2050s, a time when CDs and MP3s have almost ceased to exist, it turns out to be -- well, no, I shouldn't spoil it.)

But Maggie's apparent lameness and fakeness is itself part of the mystery. Fraudulent or not, there's no question that she's a sexy and compelling woman, and there's nothing false about the odd chemistry she strikes with the withdrawn and overly controlled Peter, or about Lorna's mounting jealousy. And what about the chapters we don't understand? What is the significance of the 8-year-old girl, a student of Peter's at the private school where he's a substitute teacher, who's apparently suffering some kind of disturbing abuse? And what's driving the mysterious female cop or secret agent (Davenia McFadden), who arrives in L.A. with a lot of puzzling gear hidden beneath a shopping bag, including a photograph that seems to be of Maggie?

All this is heading toward a dynamite denouement, which, for all the movie's tense atmosphere and expert pacing, Batmanglij and Marling can't quite pull off. I'm totally OK with irresolution and mystery, don't get me wrong; the spinning top at the end of "Inception" is all good, and I don't need to know for sure whether Maggie is an oracle of doom from the middle of the century or a tall drink of water running a delicious con. Maybe, in the quantum state of low-budget mind-melter cinema, she can be both! But "Sound of My Voice" has such creepy-crawly, brain-tickling energy that I wanted a much bigger payoff out of the final collision of all these people and episodes. (Go see the movie and come back; we'll talk.) Maybe they're saving that for the sequel. In which case, I'm mastering the secret handshake -- there really is one -- memorizing the lyrics of the surprising hit song, and getting in line.

"Sound of My Voice" is now playing in major cities.