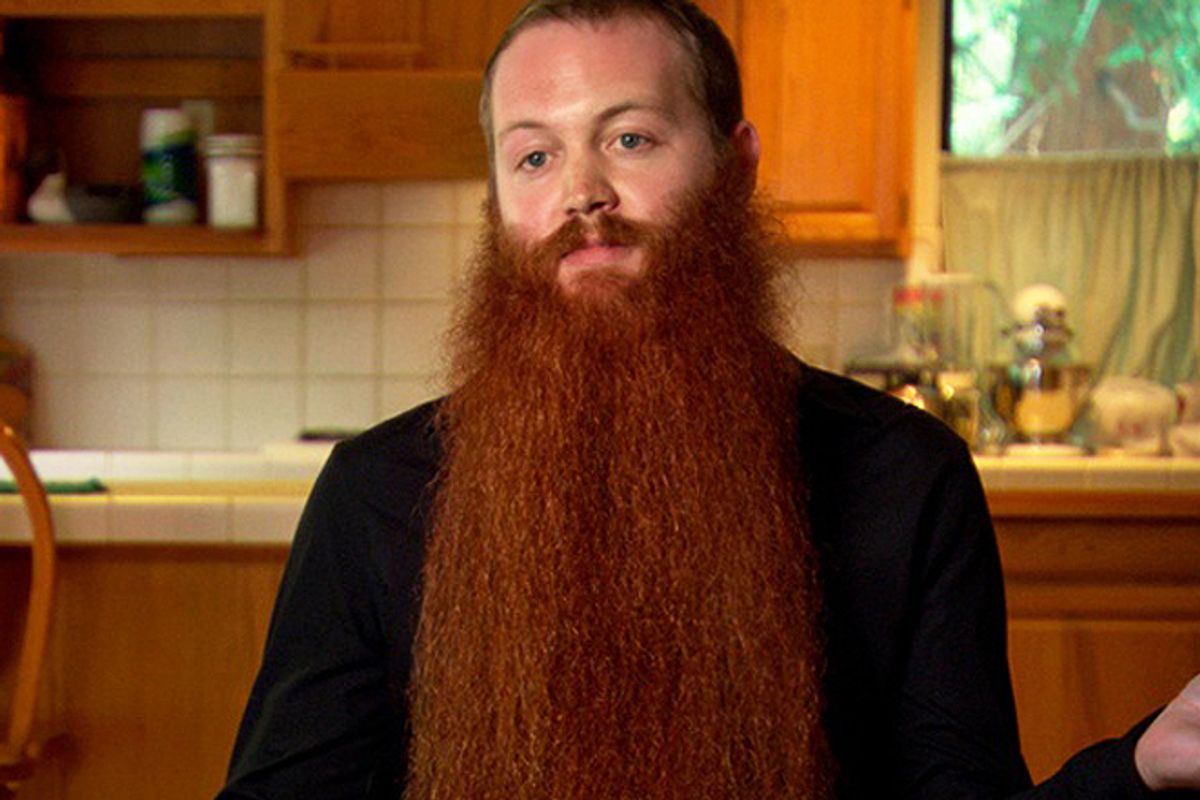 American men are bewildered about their place in the cosmos, or so we have been told repeatedly over the last 20 years. They don't know whether to thread their eyebrows or wield a welding torch, and end up trying to do both at once (which is inadvisable). As comedian Adam Carolla laments in a scene from Morgan Spurlock's documentary "Mansome," the old-time certainties of gender identity have melted away: Women are flying fighter jets and men work at the hair salon; there are no longer "chick jobs and guy jobs."

I get that Carolla is just cracking wise, from inside the bubble of his own lame version of post-rockabilly guy-shtick -- he is interviewed inside a garage, with what looks like an orange Camaro behind him in the middle distance -- and that if you brought up the fact that those old-time "chick jobs" paid 40 to 80 percent less than "guy jobs," he'd get all irritated with you for being a drag. He's still an idiot, though, even if he's an idiot in quotation marks. That's kind of the problem with "Mansome," which tries to tackle the enormous subject of contemporary male vanity as an assemblage of whimsical anecdotes, which are often entertaining in themselves but studiously avoid any semblance of intelligent analysis or historical understanding.

It's pointless to come down too hard on a film like "Mansome," because like all Spurlock's work (including "Super Size Me" and "Where in the World Is Osama bin Laden?") it's driven by a good-hearted frat-boy humor that seems fundamentally sincere. It's more first-person journal and travelogue than it is cultural archaeology, and as such it's basically OK. Spurlock gets to interview some of his celebrity pals about their attitudes toward masculinity and grooming: Paul Rudd is slightly ill at ease, Judd Apatow is charming, and Zach Galifianiakis steals the show, of course. (When asked to rate his looks on a scale of 1 to 10, Galifianakis responds confidently that some people find him "a strong 2.")

Spurlock documents his own decision to shave off his trademark porn-star 'stache, thereby reducing his 5-year-old son to torrents of tears. (It was definitely a mistake, Morgan.) He meets various kooky characters who have some tangential relationship to his theme, including a California suburbanite named Jack Passion who describes himself as a professional "beardsman," meaning he travels the world exhibiting his Hagar-the-Horrible facial thatch in competitions. (Anthrax rhythm guitarist Scott Ian responds: "Beard and mustache competitions, for want of a better word, are kind of gay." I laughed, and I know that's wrong.) Then there's the elegantly coiffed and tailored Manhattan clothing buyer who describes himself as the "dictionary definition of a metrosexual," perhaps making up for his teen years as a Sikh immigrant outcast in middle America. And the entrepreneur who has introduced a lotion-y product called Fresh Balls: The Solution for Men. (Yes, it is what you think it is.)

In fairness, Spurlock is at least half aware that all the jokes and episodes of "Mansome" never add up to anything, except perhaps the conclusion that neither male narcissism nor male grooming is anything new, but that they have been coded in different ways at different times. Masculinity is no less a troubled construction than is femininity, and it's just as easily whipped about by the tides of commerce and fashion. The aristocratic dandies of the 18th century make Spurlock's New York Sikh metrosexual look like a shoeless Dust Bowl farmhand, and every Important Man of the 19th century, regardless of background or affiliation -- King Leopold II! Karl Marx! The pioneering Ambrose Burnside! -- had his own tonsorial signature that required extensive maintenance.

Now, I'm not denying that there's something specific and contemporary about the version of male narcissism wrought by consumer capitalism, with its tendency to turn things once seen as immutable, such as gender or sexual identity, into fluid and exchangeable commodities with no fixed meaning. (Speaking of Karl Marx, it was he who wrote that, under capitalism, "all fixed, fast frozen relations, with their train of ancient and venerable prejudices and opinions, are swept away ... All that is solid melts into air, all that is holy is profaned.") It was to address that question on a pop-sociological level that the term "metrosexual," first introduced to America a decade ago in this Salon article by Mark Simpson, was originally invented. (Simpson's coinage was instantly stolen by marketers, of course, and turned into a pretty-boy Frankenstein monster who was, in turn, burned by the resentful villagers.)

Some of that big-picture stuff comes up almost by accident in "Mansome," but Spurlock doesn't even pretend to pay attention. He's just a guy! He's confused like the rest of us! He makes his little boy cry and watches pro wrestler Shawn Daivari (a Minnesota native who plays the anti-American "heel" called Sheik Abdul Bashir) shave his back all the way down to his butt crack. He sticks for far too long with an embarrassing framing device in which Jason Bateman and Will Arnett go to a spa and engage in uneasy homoerotic banter. He chops up the movie into irrelevant chapters about beards, mustaches, hair and so on, as if those things were unrelated. When he goes to get his own hair cut, it's at some pseudo-old-fashioned place in downtown Manhattan where the wood fixtures are way too polished and the barbers are conspicuously overdressed. It's kind of endearing and kind of asinine.