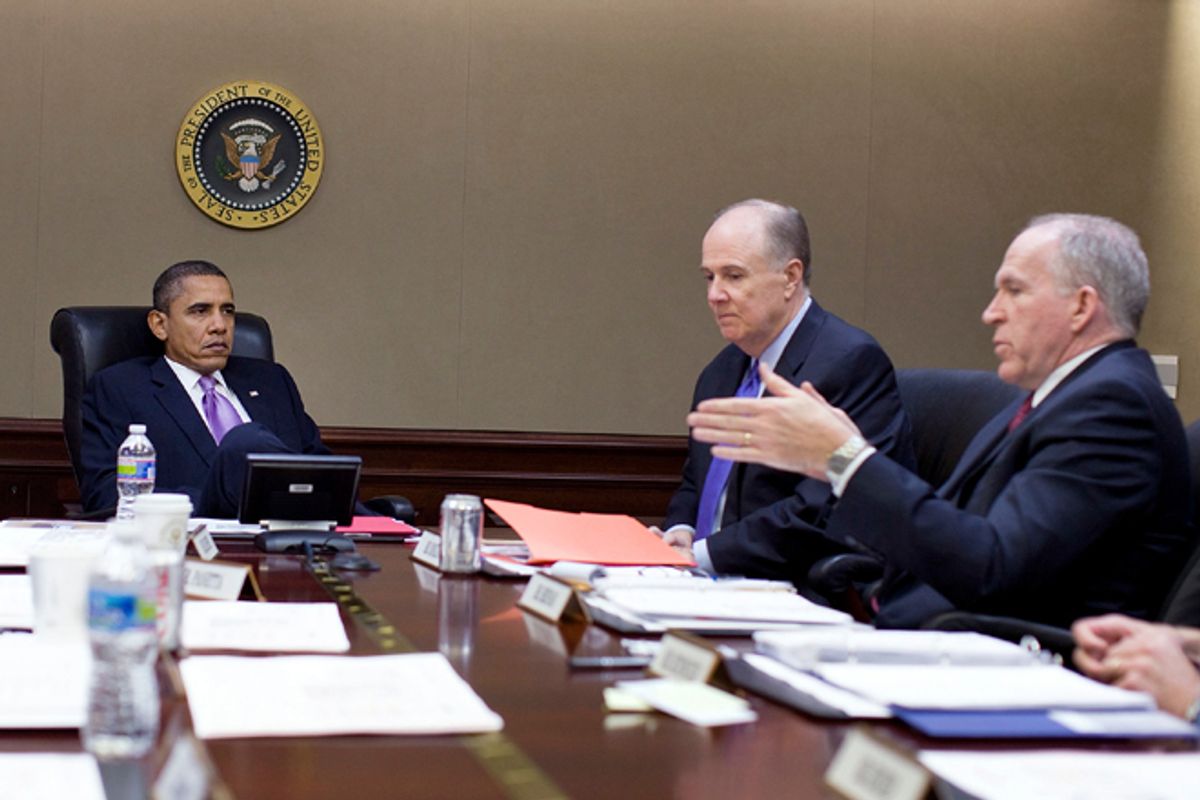 The primary fear-mongering agenda item for the National Security and Surveillance State industry is now cyberwarfare. The Washington cadre of former military officials who seek to personally profit by exploiting national security issues -- represented by Adm. Michael McConnell and Gen. Michael Hayden -- has been running around for several years shrilly warning that cyberwarfare is the greatest threat posed by Terrorists and other of America's enemies (and, just coincidentally, they also argue that it's urgent that the U.S. Government purchase wildly expensive cyber-security technology from their private-sector clients as well as seize greater control over the Internet to protect against the threat).

But -- as is usually true when it comes to Washington warnings about the evils of Others -- this is pure projection. The U.S. is the leading developer and perpetrator of cyberwarfare, not the leading target. The New York Times this morning has a long excerpt from a new book by its hawkish national security reporter David Sanger -- the book is entitled "Confront and Conceal: Obama’s Secret Wars and Surprising Use of American Power" -- which reveals that President Obama personally oversaw the development, and ordered the deployment, of the world's most sophisticated computer virus, unleashed (in cooperation with Israel) on Iran's nuclear enrichment facility.

Like many of President Obama's defining policies -- the Wall Street bailout, the Detroit bailout, the withdrawal of troops from Iraq, military commissions, indefinite detention, etc. -- this virus (code-named "Olympic Games") was begun by President Bush. In fact:

Rather than just "preserve" them, he has rapidly accelerated both. As Sanger writes, Obama's order for "increasingly sophisticated attacks on the computer systems that run Iran's main nuclear enrichment facilities" will go down in history as "America’s first sustained use of cyberweapons." But it's not merely the U.S.'s first use; it marks the world's first-ever deployment for military purposes of a whole new category of highly destructive weapons:

Mr. Obama, according to participants in the many Situation Room meetings on Olympic Games, was acutely aware that with every attack he was pushing the United States into new territory, much as his predecessors had with the first use of atomic weapons in the 1940s, of intercontinental missiles in the 1950s and of drones in the past decade. He repeatedly expressed concerns that any American acknowledgment that it was using cyberweapons — even under the most careful and limited circumstances — could enable other countries, terrorists or hackers to justify their own attacks.

Isn't it amazing how the U.S. is constantly the world's first nation to use new, highly destructive weapons -- at the same time that it bombs, invades, and kills more than any other country by far -- and yet it still somehow gets its media to tell its citizenry that it is America's Enemies who are the aggressors and the U.S. is simply a nation of peace seeking to defend itself.

Needless to say, if any cyber-attack is directed at the U.S. -- rather than by the U.S. -- it will be instantly depicted as an act of unparalleled aggression and evil: Terrorism. Just last year, the Pentagon decreed that any cyberattack on the U.S. would be deemed "an act of war." As Rudy Giuliani said about whether waterboarding is torture: "It depends on who does it." Here's a cartoon from today making the same point.

Administration defenders will undoubtedly insist that unleashing cyber warfare was all necessary to prevent Iran from obtaining nuclear weapons and impeding an Israeli attack -- even though the U.S. Government acknowledges there is no evidence that Iran is pursuing nuclear weapons; Iran has the absolute right to enrich uranium for civilian purposes, and it is far from clear that this virus meaningfully impeded Iran's nuclear program. But no matter: once a Manichean storyline is implanted (Evil Iran v. Virtuous America), all acts of aggression by the super-hero against the villain are inherently justified.

Beyond the substance of this revelation, there is something quite notable going on here. This morning's story by Sanger is but the latest in a long line of leaks about classified programs that have two attributes in common: (1) they come from senior Obama administration officials; and (2) they are designed to depict President Obama, in an Election Year, as a super-tough, hands-on, no-nonsense Warrior. Put another way, the administration that is pathologically fixated on secrecy and harshly punishing whistleblowers routinely leaks national security secrets when doing so can politically benefit the President.

Last year, top-level Obama officials shuffled sensitive information about the bin Laden raid to Hollywood filmmakers working on a pre-election hagiographic film, followed by TV interviews with a grateful, reverent Brian Williams in the Situation Room Where it All Happened, at the very same time they were insisting in court that the bin Laden raid was too secret to permit any disclosures. Earlier this week, The New York Times published extensive details about how President Obama has personally taken charge of deciding who will die in drone attacks -- disclosures that came from "three dozen of his current and former advisers" -- even as the administration has been continuously insisting that no courts can review the legality of their actions or compel any form of disclosure on the ground that even acknowledging the existence of this program would endanger national security.

And now we have the spectacle of Obama's "senior administration officials" boasting to David Sanger about the details of this highly classified program and Obama's heroic seizing of the mantle ("From his first days in office, he was deep into every step in slowing the Iranian program — the diplomacy, the sanctions, every major decision,” a senior administration official said. “And it’s safe to say that whatever other activity might have been under way was no exception to that rule”). In other words: Dear Vital Jewish Voters in Crucial Swing States: behold what this great leader did in secret to pummel Iran.

Does anyone doubt that if a government official had leaked information about this cyber virus that reflected poorly on rather than glorifying the Commander-in-Chief -- disclosing, say, ineptitude, corruption or illegality -- that they would be harshly prosecuted? If anyone does doubt that, just consider the Obama administration's ongoing efforts to prosecute former CIA agent Jeffrey Sterling under espionage statutes for allegedly telling The New York Times' James Risen -- almost ten years ago -- about dangerous mistakes the CIA made in trying to infiltrate Iran's nuclear program (mistakes which actually resulted in helping the Iranian program).

So exposing classified national security information is an act of criminal evil when done by a whistleblower to expose high-level error or abuse, or to a court trying to assess the legality of the President's actions. But it is an act of great nobility when done to venerate the President as a strong and tough warrior. That's the manipulative, propagandistic game-playing this administration exploits with its secrecy powers and whistleblower prosecutions.

There's one last point meriting consideration. Note how eager Obama officials are to use leaks to tout his militaristic aggression. He ended bin Laden and Awlaki's lives. He personally picks the drone targets and aggressively piles up Terrorist corpses. He himself commanded the unleashing of the world's first military attack using cyber-weapons.

The revelations this week about the President's "kill list" sparked more widespread condemnation among at least some progressive writers than any other single episode in quite some time (I've cited several examples over the past week, but make certain to read Ta-Nehisi Coates' scathing denunciation -- in which he compares the mentality behind Obama's drone program to that which reportedly drove George Zimmerman and the NYPD's racist policing actions -- and also see Stephen Colbert's two-minute commentary and his monologue on this last night). Why would the administration want to leak information that causes such widespread revulsion among some of the President's normally steadfast supporters?

It's because, aside from the tried-and-true strategy of Democratic politicians benefiting politically from provoking criticism from the "Left," Obama officials (and their apparatchiks) are eager to depict him as a violence-wielding aggressor. As Digby put it this week, "the [Obama] campaign is happy about all this condemnation" aimed at the drone program as it "proves [his] macho bona fides." Obama officials will undoubtedly be just as pleased with any objections to waging undeclared, unauthorized cyber-warfare on Iran's perfectly legal nuclear program, thus bringing the world yet another new means of destructive warfare.

That's because huge numbers of America's independents, "moderates" and Good Progressives are extremely aroused by these sort of displays of manly presidential "toughness": witness the stiffened spines and puffed-out chests as they hail their leader for dumping bin Laden's bullet-riddled body into the ocean or creating piles of other corpses throughout the Muslim world. The more objections from liberals and others, the better.

That's all repellent enough. But that they use national security leaks to accomplish these political goals -- at the very same time they exploit secrecy claims to persecute whistleblowers and shield themselves from judicial review -- makes it just grotesque.

I was on To the Point yesterday debating Obama's kill list along with The New York Times' Jo Becker, who co-wrote that story, and two academic experts on the topic. The segment is quite revealing, and my participation begins at 24:00; it can be heard here:

UPDATE: To be fair, President Obama has found some important and impressive allies to defend his kill list.

UPDATE II: Thomas Drake, the former NSA official prosecuted (unsuccessfully) by the Obama DOJ for "espionage" because he disclosed to reporters evidence of serious waste, corruption and potential illegality in the NSA's domestic surveillance programs, today said this about the Iran story in the NYT:

Could you imagine what it's like to have been threatened with life imprisonment by the Obama administration for blowing the whistle on serious government wrongdoing -- as Drake was -- only to watch the very same administration leak national security secrets at will in order to glorify the President for political gain?