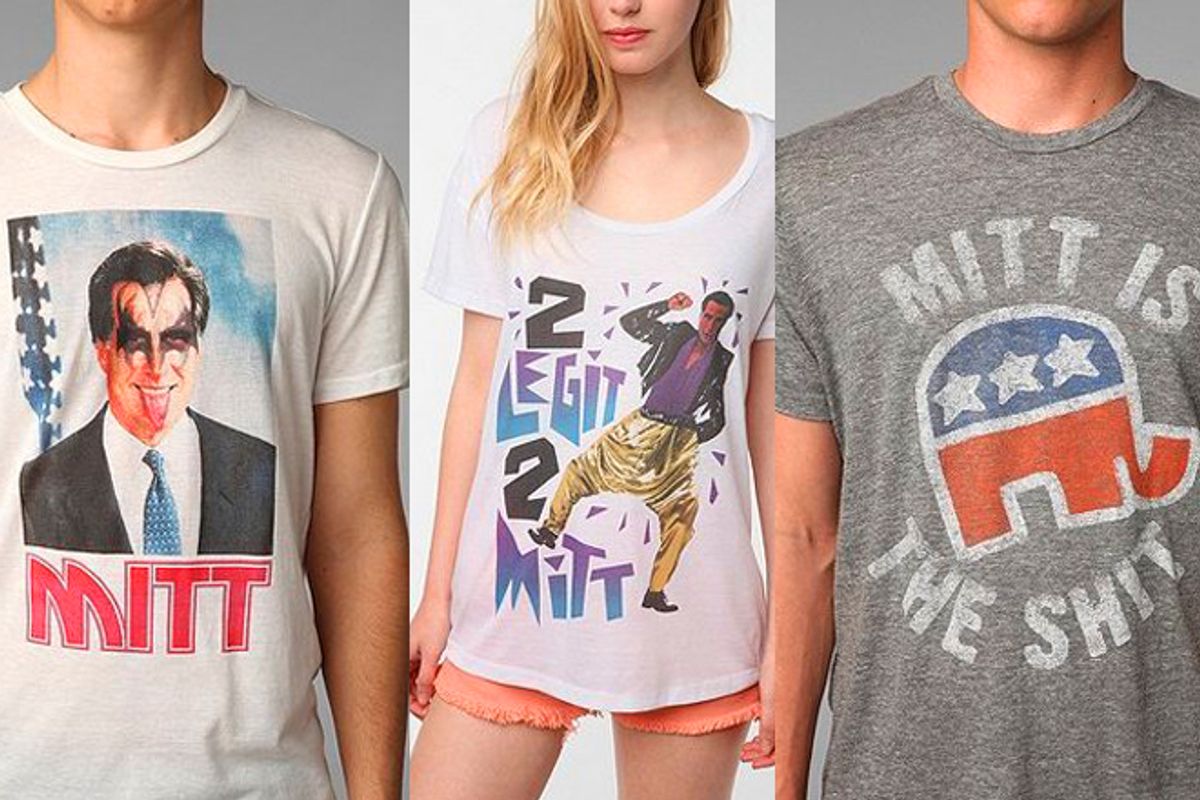 What's your pleasure, young person who lives in a Mormon Williamsburg of the mind? Mitt, dolled up like a member of KISS? A subtle picture of an oven mitt, and the word ROMNEY? A Hammer-pantsed "2 Legit 2 Mitt" Romney -- which, if you think about it for half a second, doesn't make any sense whatsoever. And though I don't believe in victim blaming, I will warn you that if you decide to go walking down the street in a distressed, elephant-logoed "Mitt Is the Shit" shirt, you will have no one to blame but yourself for the inevitable butt-trouncing you receive. Or maybe you're more the "Ron Paul: American Badass" or "Ron Paul & Drugs & Rock & Roll" type. Because what is more badass than a guy who supports deregulating marijuana but not "so-called family planning"?

A less-jaded consumer might view the new line of shirts as an attempt at humor, turning the stiffest, whitest guys in politics into "badasses." But just remember, that the rah-rah Romney apparel is being peddled by a company started by a rich conservative -- and a company that has previously sought "inspiration" for its clothing  and jewelry designs from independent artists. Urban Outfitters's sketchy politics has also included a free and easy relationship with Navajo art and iconography, shaky excuses for shirts that come in "Obama black" and hastily withdrawn shirts supporting same-sex marriage. They've also stocked transphobic greeting cards.

Urban Outfitters doesn't seem to mind borrowing other people's ideas, but it thinks that a pro-gay shirt is courting "bad press." That's not too legit, folks. Not too legit at all. In the spirit of bi-partisanship, the company does offer a line of Obama tees. Interestingly, though, while there's a Romney shirt portraying the Republican candidate as an all-American football player, that Kenyan guy gets to be a basketball player. Way to stretch the imagination, you guys.

What's revolting about the latest Urban Outfitters gambit is its sneaky ploy of making conservatism seem so uncool it's cool, all funny and retro and Kelly Kapowski. Which, in turn, is how some doofus winds up using his chest as free advertising for a candidate he'd otherwise never in a million years vote for. That what makes UO the only apparel retailer that can make you think, "If only they had the integrity of American Apparel." It's selling dishonesty, wrapped in the guise of irony. So if you want to make a statement, aspiring dork hipster, skip the Mitt, and just show your support for the Teenage Mutant Ninja Turtles instead.