It is supporters of Obama's aggression, not its opponents, who are likely to provoke another Terrorist attack 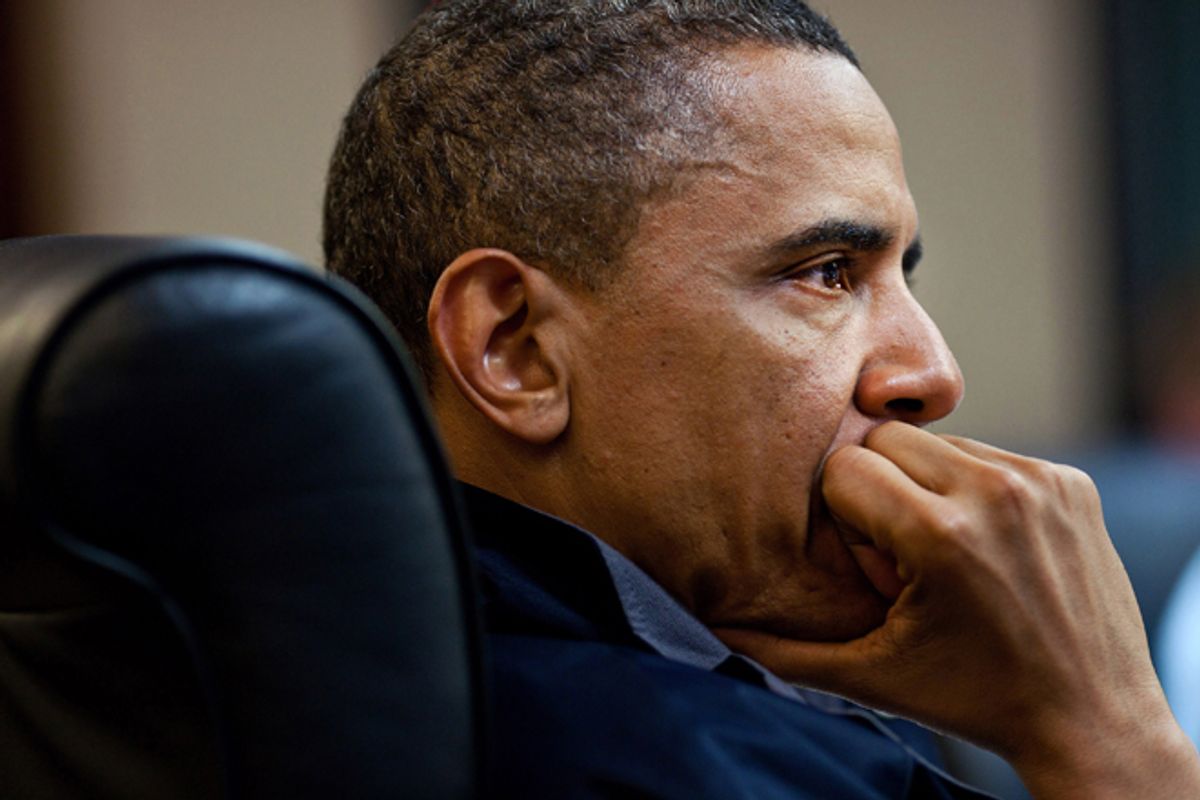 What frustrates me about Conor's position - and Greenwald's as well - is that it kind of assumes 9/11 didn't happen or couldn't happen again, and dismisses far too glibly the president's actual responsibility as commander-in-chief to counter these acts of mass terror.

This is exactly backward. I absolutely believe that another 9/11 is possible. And the reason I believe it's so possible is that people like Andrew Sullivan -- and George Packer -- have spent the last decade publicly cheering for American violence brought to the Muslim world, and they continue to do so (now more than ever under Obama). Far from believing that another 9/11 can't happen, I'm amazed that it hasn't already, and am quite confident that at some point it will. How could any rational person expect their government to spend a full decade (and counting) invading, droning, cluster-bombing, occupying, detaining without charges, and indiscriminately shooting huge numbers of innocent children, women and men in multiple countries and not have its victims and their compatriots be increasingly eager to return the violence?

Just consider what one single, isolated attack on American soil more than a decade ago did to Sullivan, Packer and company: the desire for violence which that one attack 11 years ago unleashed is seemingly boundless by time or intensity. Given the ongoing American quest for violence from that one-day attack, just imagine the impact which continuous attacks over the course of a full decade must have on those whom we've been invading, droning, cluster-bombing, occupying, detaining without charges, and indiscriminately shooting.

One of the many reasons I oppose Obama's ongoing aggression is precisely that I believe the policies Sullivan and Packer cheer will cause another 9/11 (the other reasons include the lawlessness of it, the imperial mindset driving it, the large-scale civilian deaths it causes, the extreme and unaccountable secrecy with which it's done, the erosion of civil liberties that inevitably accompanies it, the patently criminal applications of these weapons, the precedent it sets, etc.). I realize that screaming "9/11" has been the trite tactic of choice for those seeking to justify the U.S. Government's militarism over the last decade, but invoking that event strongly militates against the policies it's invoked to justify, precisely because those policies are the principal cause of such attacks, for obvious reasons.

In fact, one need not "imagine" anything. One can simply look at the explanations given by virtually every captured individual accused of attempting serious Terrorist attacks on U.S. soil. The Times Square bomber, the Pakistani-American Faisal Shahzad, said this:

As soon as he was taken into custody May 3 at John F. Kennedy International Airport, onboard a flight to Dubai, the Pakistani-born Shahzad told agents that he was motivated by opposition to U.S. policy in the Muslim world, officials said.

“One of the first things he said was, ‘How would you feel if people attacked the United States? You are attacking a sovereign Pakistan’,” said one law enforcement official, who spoke on condition of anonymity because the interrogation reports are not public. “In the first two hours, he was talking about his desire to strike a blow against the United States for the cause.”

When the federal judge who sentenced Shahzad asked with disgust how he could try to detonate bombs knowing that innocent children would die, he replied: "Well, the drone hits in Afghanistan and Iraq, they don’t see children, they don’t see anybody. They kill women, children, they kill everybody." Those statements are consistent with a decade’s worth of emails and other private communications from Shahzad, as he railed with increasing fury against the wars in Afghanistan and Iraq, drone attacks in Pakistan, Israeli violence against Palestinians and Muslims generally, Guantanamo and torture, and asked: "Can you tell me a way to save the oppressed? And a way to fight back when rockets are fired at us and Muslim blood flows?"

Najibullah Zazi, one of the first Afghans ever to be accused of Terrorism on U.S. soil when he plotted to detonate bombs in the New York subway system, was radicalized by the U.S. occupation of his country ("This is the payback for the atrocities that you do," he said). Al Qaeda in the Arabian Peninsula (AQAP) expressly said that the Christmas Day bomb attempt by Umar Farouk Abdulmutallab was in retaliation for the Obama cluster-bomb airstrike in Yemen that killed dozens of women and children along with U.S. support for the Yemeni dictator. The Fort Hood shooter Nidal Hasan was motivated by "the killing of Muslims in Iraq and Afghanistan."

Anwar Awlaki was once such a moderate that he vehemently denounced the 9/11 attacks, got invited to the Pentagon to speak, and hosted a column in The Washington Post on Islam -- but then became radicalized by the constant post-9/11 killing of Muslims by his country (the U.S.). David Rodhe, the former New York Times reporter who was held hostage by the Taliban for nine months, said after he was released that Taliban "commanders fixated on the deaths of Afghan, Iraqi and Palestinian civilians in military airstrikes, as well as the American detention of Muslim prisoners who had been held for years without being charged."

Even The Washington Post just two weeks ago pointed out that the primary source of strength for AQAP -- the Terror group which the U.S. Government insists is the greatest threat to the U.S. -- are repeated U.S. drone strikes in Yemen; said The Post: "An escalating campaign of U.S. drone strikes is stirring increasing sympathy for al-Qaeda-linked militants and driving tribesmen to join a network linked to terrorist plots against the United States." In late 2009 -- almost three years ago -- The New York Times pointed out exactly the same thing when quoting a Yemeni official after Obama's civilian-killing cluster bomb attack ("The problem is that the involvement of the United States creates sympathy for Al Qaeda"). Even Sullivan acknowledges: "there does seem a danger, especially in Yemen, that drones may be focusing the Islamists' attention away from their own government and onto ours."

In other words, the very policies that Sullivan and Packer adore are exactly the ones that make another 9/11 so likely. Running around screaming "9/11" at Obama critics to justify his ongoing American violence in the Muslim world is like running around screaming "lung cancer" to justify heavy cigarette smoking. It isn't those of us who oppose American aggression in the Muslim world who need manipulative, exploitative reminders about 9/11; it's those who cheer for these policies who are making a follow-up attack ever more likely.

Prior to 9/11, of course, the U.S. spent decades propping up dictators in that part of that world, overthrowing their democratically elected leaders, imposing devastating sanctions that killed hundreds of thousands of Muslim children -- literally -- and then blithely justifying it like it was the most insignificant problem in the world, arming, funding and diplomatically protecting continuous Israeli aggression, and otherwise interfering in and dominating their countries. There's a reason they decided to attack the U.S. as opposed to, say, Peru, or South Africa, or Finland, or Brazil, or Japan, or Portugal, or China. It isn't because The Terrorists put the names of all the countries into a hat and -- bad luck for us -- randomly picked out the piece of paper that said "The United States."

It's because the U.S. has been and continues to be guided by the imperial mindset that causes Andrew Sullivan, George Packer and people like them to cheer and cheer and cheer for U.S. violence and other forms of coercion in that part of the world -- violence and coercion that they would be the first to denounce and demand war in response to if it were done to the U.S. rather than by the U.S. Indeed, that's precisely how they reacted -- and, a full decade later, are still reacting -- to a one-time attack on U.S. soil.

In light of that, I can't even conceive of the uncontrolled rage, righteous fury and insatiable desire for violence in which they would be drowning if those attacks lasted not a single day but a full decade, if it involved constant video imagery on American television of dead American children and charred American wedding parties and thousands of Americans imprisoned for years in cages in a distant ocean prison without charges and surveillance and weaponized drones flying constantly over American soil and unignited cluster bombs left on American soil that explode when American children find them.

Although I can't conceive of the rage that would be produced in people like Sullivan and Packer from a decade's worth of that kind of violence on American soil, they should spend some time trying to imagine it. Then perhaps they'd understand how much they -- and the President whose foreign policy they venerate -- are doing to bring about "another 9/11" with the non-stop violence they so enthusiastically endorse.

For those who don't understand or who like purposely to ignore the difference between observations about causation (A causes B) and arguments about justification (B is justified) -- where "B" is "violent attacks on civilians" -- see here. To be clear, this analysis is an example of the former (a causal argument), not the latter (an argument about justification).

On a related note: a Democratic Party club recently created a website to tout all of President Obama's sterling achievements. As Charles Davis and Reason both note, half of those "achievements" are corpses that he created. This, ladies and gentlemen, is your Democratic Party in the Era of Obama:

I have no idea who my President keeps killing -- never heard of almost any of them -- but I'm going to blissfully assume that they're TERRORISTS and thus stand and cheer when their lives are ended.

Why do they hate us?

UPDATE [Wed.]: My Salon colleague Jefferson Morley has an excellent article documenting the mass political instability that Obama's militarism in that part of the world is breeding; it's well worth reading.

UPDATE II [Wed.]: A new poll from the Pew Research Center finds that "The Obama administration's increasing use of unmanned drone strikes to kill terror suspects is widely opposed around the world"; in particular: "in 17 out of 21 countries surveyed, more than half of the people disapproved of U.S. drone attacks." Caring about world opinion is so 2004.