A self-mocking column has real value: it expresses the predominant attitude of America's media class toward secrecy 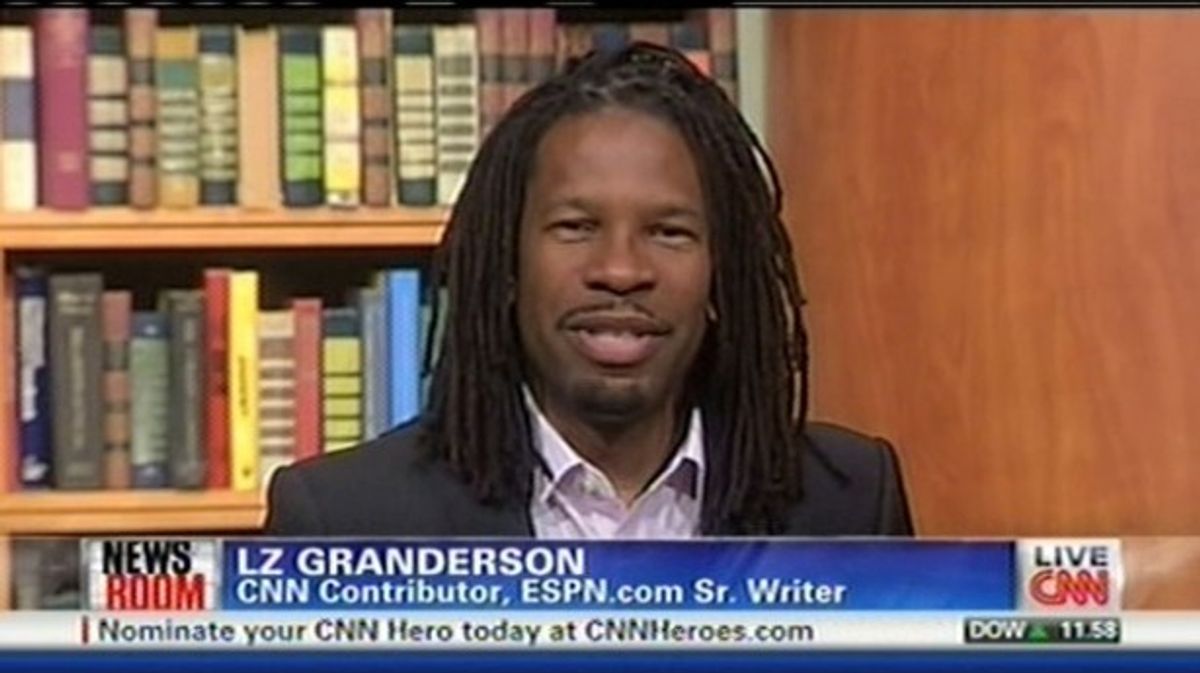 LZ Granderson is a regular CNN columnist and contributor, and has written a column this week that -- no joke -- urges Americans to stop being so "nosy" about all the bad things the U.S. Government does. You just have to read it to believe it:

We are a nosy country.

Though to be fair, it's not entirely our fault. Between the 24/7 news cycle, social media and reality TV, we have been spoon fed other people's private business for so long we now assume it's a given to know everything. And if there are people who choose not to disclose, they must be hiding something. Being told that something's "none of your business" is slowly being characterized as rude, and if such a statement is coming from the government, it seems incriminating.

Times have changed. Yet, not everything is our business. And in the political arena, there are things that should be and need to be kept quiet. . . .

And sometimes the federal government deems it necessary to get its hands a little dirty in the hopes of achieving something we generally accept as good for the country. . . .

And maybe it's better for us not to be so nosy, not to know everything because, to paraphrase the famous line from the movie "A Few Good Men," many of us won't be able to handle the truth.

This was written by a journalist and published by a media outlet. And this is plainly not satire. What prompted his paean to the virtues of minding our own business was the Congressional investigation into the DOJ's Fast and Furious gun-running program into Mexico -- one that resulted in the deaths of numerous people, including a U.S. agent -- but he finds many other examples where we should just stay out of the Government's way:

We do not want to open Pandora's Box, not about [Fast and Furious] and certainly not about a bunch of other potentially scandalous things the federal government has been involved with. . . .

We still don't have access to all of the messy facts surrounding the Iran-Contra scandal that erupted during the Reagan administration. . . .

Lt. Col. Oliver North took one for the team back then, and there's a good chance Attorney General Eric Holder will have to take one for the team in the Fast and Furious controversy. And by team, I'm not referring to Republicans or Democrats, but rather Americans . . . .

Were they done as a way to keep America safe?

North was a fall guy. Not for President Reagan but for all of us. Just as Holder has become a villain to many who are pointing fingers at him.

But to go much beyond the criticism of these men runs the risk of learning that this great nation of ours is heavily involved in doing some things that are not so great.

Think about it: We have allowed weapons to cross the Mexican border and into the hands of criminals for years. Many of these weapons were involved in killing innocent Mexicans. There's nothing very admirable about that. But the truth is, it's very American.

By allowing guns to infiltrate Mexico's drug cartel, we thought we could trace them up the ladder to the leaders. Take off the head and the body dies. As for the innocent people who lost their lives? Collateral damage. That's the uncomfortable backstory to this scandal. And there are likely other operations like it in our nation's history that we don't even have a clue about.

And maybe it's better for us not to be so nosy, not to know everything because, to paraphrase the famous line from the movie "A Few Good Men," many of us won't be able to handle the truth.

I trust not much needs to be said about this. It mocks itself. The authoritarianism on display is just cringe-inducing. I suppose the only thing surprising about it is that someone who works in journalism, and a media corporation that claims to do journalism, would publish something that admits to thinking this way.

The reason I note this is not the entertainment value of marveling at something so inane (at least not primarily). It's because this is a very common mindset in the journalist class, among media personalities with much more influential platforms than Granderson's.

Recall that The Washington Post's Richard Cohen condemned the investigation into the Plame leak on the ground that "as with sex or real estate, it is often best to keep the lights off." The heralded tough-guy journalist Tim Russert said that all of his conversations with government officials are presumptively off the record, and he feels free to report them only if they give him explicit permission ("when I talk to senior government officials on the phone, it's my own policy our conversations are confidential. If I want to use anything from that conversation, then I will ask permission").

Worse, you can count on one hand the number of establishment American journalists who have vocally denounced Obama's war on whistleblowers. That's true even though the Obama administration has targeted one of the nation's most accomplished investigative reporters (James Risen), while another (Jane Mayer) has explained that a prime goal of this whistleblower war is to impede and even criminalize investigative journalism ("when our sources are prosecuted, the news-gathering process is criminalized, so it’s incumbent upon all journalists to speak up"). Even fewer have condemned the always-escalating witch hunt, now being led by Senate Intelligence Committee Chairwoman Dianne Feinstein, to further intimidate and deter whistleblowing leaks and fortify the wall of government secrecy even more.

Just as revealingly, the single most-hated figure in Western media circles is the person who enabled more disclosure, transparency and scoops about the West's most powerful government and corporate factions than all Western media outlets combined: Julian Assange (Bradley Manning isn't far behind). This is the case even though successful efforts to prosecute WikiLeaks would be the gravest threat to a free press in decades, literally -- something about which journalists, with rare exceptions, have been largely silent if not supportive.

Recall that on the day that WikiLeaks began publishing diplomatic cables -- revealing all sorts of deceit, corruption and illegality -- CNN's Wolf Blitzer was completely indifferent to the revelations themselves, but was furious that the U.S. Government allowed these disclosures to take place and thus forced him and his viewers to learn what the U.S. Government and its allies were doing in the dark. Or recall the debate I had with CNN's Jessica Yellin and Fran Townsend in which both insisted that WikiLeaks should be criminally prosecuted for the leaks it enabled. Or just survey the bizarrely personal, unprofessional and falsehood-filled expressions of contempt for Assange that have been spewing forth from the British media class, many of whom (not coincidentally) were and are ardent, public supporters of the war policies he helped to expose and subvert and, more generally, religious believers in the inherent Goodness of the West and its governments' conduct in the world.

This is the glaring paradox at the heart of the establishment media class. They parade around as adversarial watchdogs whose prime role is to foster transparency and shine a light on what is done in secret. But there is literally no group more slavishly devoted to the virtues of government secrecy than they. LZ Granderson's demand that we keep our nosy noses out of what the Government does (like Richard Cohen's similar demand that we keep the lights off) is notable only because it's a more explicit and honest expression of this ethos than they usually admit to.

This week's Newsweek lists the Top 10 people in 10 different digital/online categories, each determined by a committee of experts in the field (what it calls a "Digital Power Index"). For the "Revolutionaries" category, Julian Assange is listed as #1, Anonymous is #8, and Bradley Manning is #9. That category and the others can be seen here.

There are still a few tickets remaining for the July 2 event I'll be doing at the Powerhouse Arena in Brooklyn, beginning at 7:00 pm and hosted by the superb political comedian Jamie Kilstein; ticket and event information are here, and I encourage anyone in New York to come. I'll also be speaking in Chicago this Friday evening, at 7:00 pm on the Surveillance State; event information for that is here.

UPDATE: In April, 2009, on ABC News' This Week program, George Will condemned disclosures about the Bush torture program by saying that "the problem with transparency is that it's transparent for the terrorists as well," whereas Peggy Noonan unleashed this bit of journalistic wisdom: "Some things in life need to be mysterious. Sometimes you need to just keep walking." Who decides to work in journalism with those attitudes? It's easy to mock Granderson, but what he said is -- obviously -- a sentiment shared by large numbers of America's most prominent establishment journalists.