Will Robert De Niro ever make another good movie? 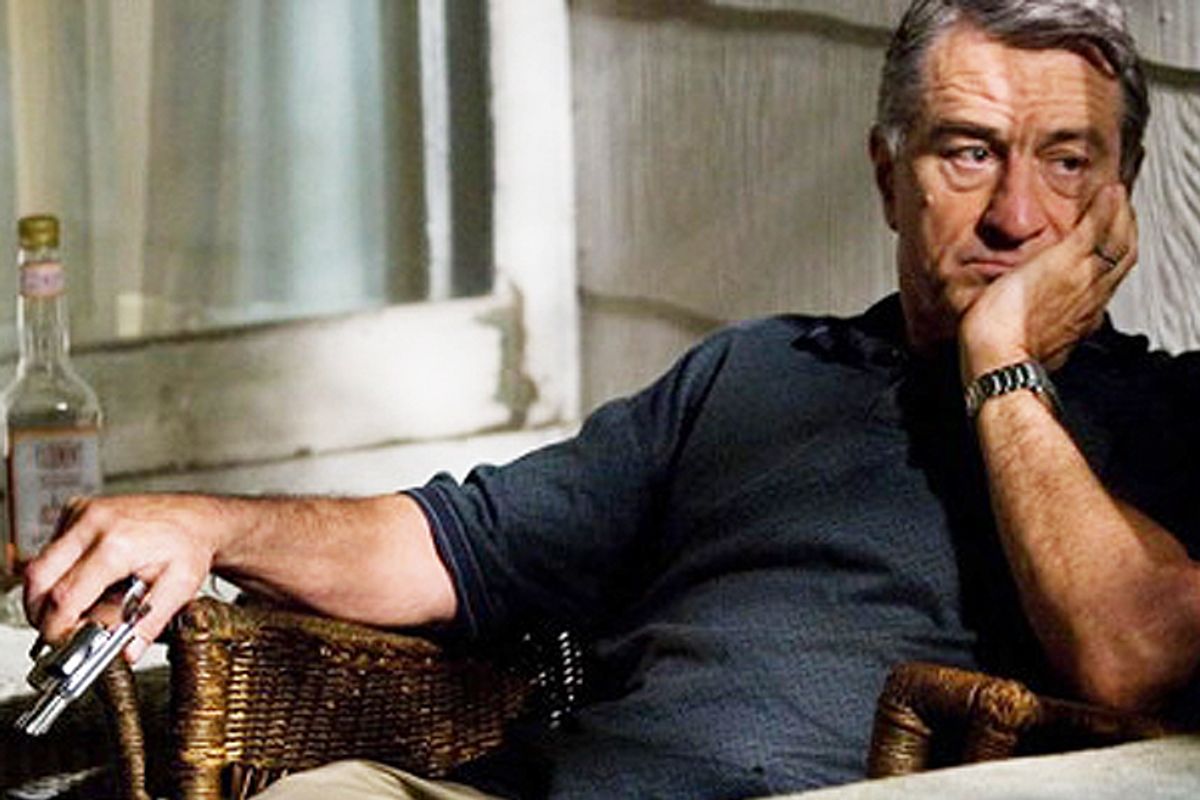 I've had numerous conversations with actors over the years about how they choose their movie roles, and the only generalization I would make is that it almost always has to do with factors that are invisible from the outside. Like friendship, or money. Journalists are naturally drawn to prominent actors who have cinephile tendencies, and who seem largely driven by personal taste or relationships with certain directors: Michelle Williams, Michael Fassbender, Viggo Mortensen. Or by stars who seem to develop a calibrated strategy for moving from one career phase into the next, like George Clooney or Matthew McConaughey. (Or Mr. Newly Single Showbiz Unsinkable himself, Tom Cruise.)

But that's not the only way to build a career. Paul Giamatti once told me that he had acted in several movies he'd never seen, and hadn't even been quite sure what they were about. (I'm betting on "Big Momma's House" as one of those.) My former colleague Stephanie Zacharek loves to tell a story about Michael Caine, during an interview, being asked to expound on a film in which he'd appeared. "I haven't seen it," Caine replied coolly, "but I've seen the swimming pool it built." John Malkovich says he has come to rely less and less on his own taste, or on preconceived notions of what's likely to be good, and instead seeks "a good experience with people I like to be around." In another direction entirely, I remember hearing Donald Sutherland explain, more than 20 years ago, how he set a new gold standard for character actors in the 1989 movie "Lock Up." Sylvester Stallone wanted Sutherland to play the sadistic prison warden that his character would battle against, but the esteemed Canadian thought the picture sounded dreadful and didn't want to do it. So he instructed his agent to demand the unheard-of sum of $1 million -- and Stallone's producers said yes.

I've never interviewed Robert De Niro (who doesn't seem to enjoy talking much), but when I bumped into him in a hallway during the 2011 Cannes Film Festival, I seized him by the lapels and yelled, "Dammit, Bob, you're a great actor! Why do you make so many terrible movies?" No, that's a lie; I said hello and he gave me the patented famous-person nod. It's nonetheless true that De Niro is a genuine titan of the American screen and that he's made quite a few films, especially in recent years, that we can only hope he's never seen. Whatever set of invisible principles has governed his choices since his unofficial breakup with Martin Scorsese (their last film together was "Casino," in 1995), the results have ranged from mixed to pretty doggone atrocious.

One thing that's clear enough is that De Niro has deliberately steered away, for the most part, from playing gangsters or Italian-Americans or New Yorkers, and you can't blame him for that. I mean, enough's enough, right? His 21st-century résumé begins with the role of Fearless Leader in "The Adventures of Rocky & Bullwinkle" -- in which he's highly amusing -- and pretty much rolls from there right through a parade of WTF-ness: the increasingly depressing "Fockers" series, an archbishop in the dreadful remake of "The Bridge of San Luis Rey," a bit part as a wizard in the family-oriented fantasy "Stardust" (something of a cult fave, I gather) and even a role opposite longtime friend and rival Al Pacino in "Righteous Kill," a movie so formulaic and forgettable it has pretty much erased itself from memory.

Seriously, what in the world would De Niro's best film of the new millennium be? "The Good Shepherd," the CIA origin story he directed? OK, not bad, but he's barely in it. "Everybody's Fine" from 2009, a remake of a sentimental Italian hit? As I recall, his damped-down performance is very good, but the movie's so damn cloying. I actually might vote for "Stone," a little-seen 2010 noir in which De Niro plays an aging parole officer who gets caught in a honey trap by convicted arsonist Edward Norton and sexy steampot Milla Jovovich. I'll tell you one thing: It's definitely not "Red Lights," a ludicrous and pseudo-profound tale of paranormal research from Spanish writer-director Rodrigo Cortés, which seems to be set in an alternate universe even stupider than our own.

De Niro hams it up egregiously, and somewhat enjoyably, in a handful of scenes as a mysterious blind psychic named Simon Silver, whose return to public performances after a long disappearance becomes a huge media story. This is greatly displeasing to a rather pedantic psychologist named Margaret Matheson (Sigourney Weaver) and her repressed assistant Tom Buckley (Cillian Murphy), who long to expose him as a fraud but also fear, rather too obviously, that his powers may be real. "Red Lights" has the trashy, stylish veneer of a late-'80s Brian De Palma picture, and the random, last-call-at-the-bar cast to match: Murphy, Weaver, De Niro, Elizabeth Olsen, Joely Richardson, Toby Jones. It starts out with an almost uncountable number of stupid presuppositions, without even counting the one about psychic powers possibly being authentic. (It's a movie; I'm happy to suspend disbelief about stuff like that.)

We have to imagine a world in which the media and the public would be fascinated, for days or weeks on end, by a 60-ish guy in a suit who does mind-reading tricks, and in which mainstream scientists would toady up to him, eager to cash in on his fame, while lonely skeptics like Weaver's Matheson gnash their teeth in anguish. I suppose Cortés is riffing off somebody like real-life TV psychic John Edward, who has built a lucrative career out of a single 1998 Larry King interview, but throughout "Red Lights" the depiction of celebrity culture and science and the media and urban life in America feels oddly old-fashioned, as if the script had been written during the heyday of Uri Geller and abandoned in a Hollywood agent's filing cabinet. (Indeed, the contentious relationship between Geller and magician James Randi seems like another possible inspiration.)

While I don't think the problems of tone and style and story and characterization in "Red Lights" can all be blamed on translation, it definitely doesn't help that the movie is supposed to take place in the United States, but was written and directed by a non-native English speaker and largely shot in Barcelona (with some exterior locations in Canada). So after the script sat in that filing cabinet for 40 years, it got translated into Spanish and then back again. By Google. Cortés is a gifted showman who relies on menacing, David Lynch-style atmospherics to conceal the fact that he's a bigger huckster than De Niro's blind psychic. This movie boasts a few lurid, gothic shocks and culminates in a startling outburst of violence, but it's got nothing to say (beyond the repeated insistence that it's got many dark and troubling things to say). It doesn't even really have a main character, since Weaver short-circuits early on and Murphy's Buckley is a cryptic and alien-seeming figure.

That brings us back to De Niro, I guess, who at least provides a vintage display of overacting in a few minutes of screen time, going from long ominous silences to sardonic muttered asides to full-on bellowing bull: "Why do you doubt my powers?" We doubt your powers, Bob, because you seem completely indifferent to the question of whether the movies you make are any good. If you've got other priorities these days, like the Tribeca Film Festival or Manhattan real estate or the restaurant biz, that's terrific. But then why inflict these strange and depressing spectacles on us? And I just don't buy that playing a blind psychic in a pretentious Spanish thriller was some kind of hilarious good time, by the way.

Oh sure, I have some faith. At the very least, the law of averages suggests that something will grab De Niro's attention for real and he'll give one of those great, offhand performances, the way he did -- I'm reaching here -- in "Jackie Brown" back in '97. He plays Bradley Cooper's dad in David O. Russell's upcoming "Silver Linings Playbook," and boxing trainer Ray Arcel, opposite Gael García Bernal as Roberto Durán, in "Hands of Stone." After that comes my early pick for dazzling De Niro comeback vehicle: He's supposed to play an aging insult comic, opposite Kristen Wiig, in "The Comedian," to be directed by Sean Penn. Will it rival playing Jake La Motta, Rupert Pupkin or the young Vito Corleone? I don't know about that. But anything to forget "Little Fockers" or "New Year's Eve."