Pick of the week: Michael Winterbottom's brave and ruthless love story is the anti-"Slumdog Millionaire" 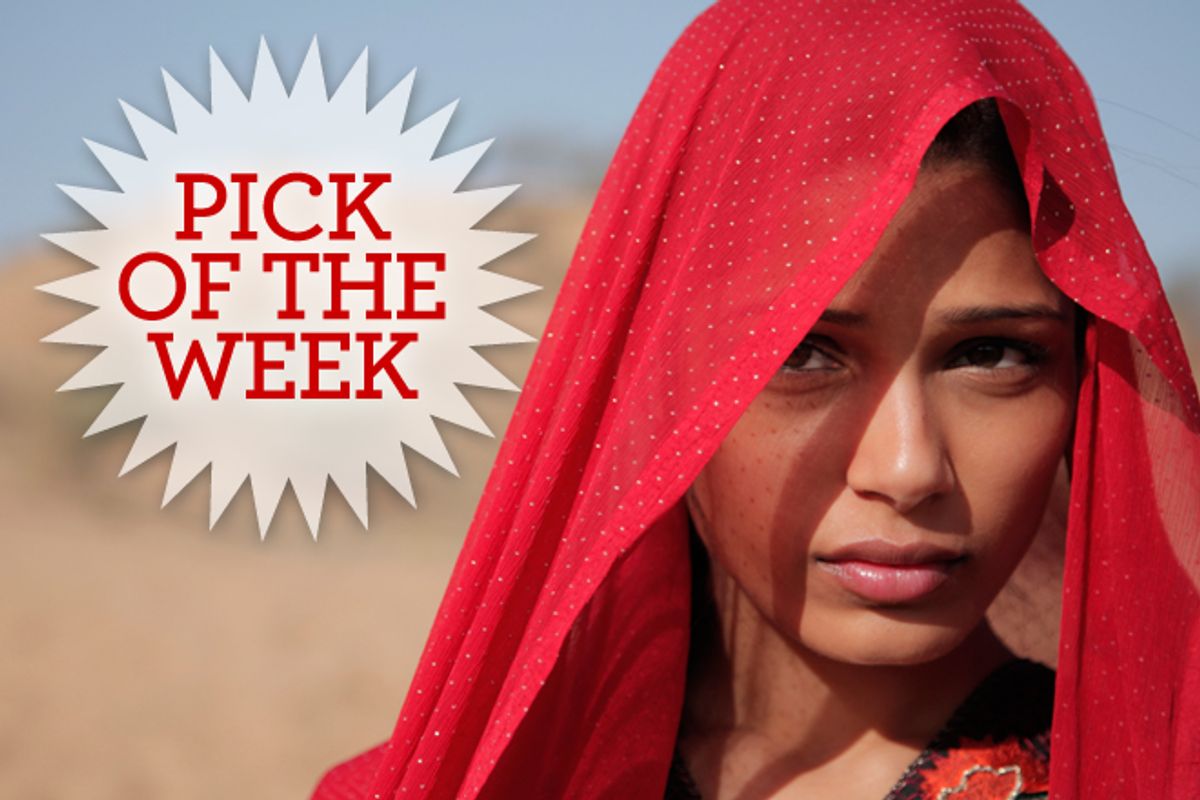 Maybe this sounds familiar: A British filmmaker goes to India and makes a vibrant contemporary love story that combines elements of realism and fantasy, stars a fresh-faced, dewy-eyed former model named Freida Pinto, and borrows a bit of energy and luster from the elaborate song-and-dance spectacles of Bollywood. But Michael Winterbottom's "Trishna" -- a glorious and ruthless modern-day adaptation of Thomas Hardy's "Tess of the d'Urbervilles" -- is definitely and defiantly not "Slumdog Millionaire." I don't know that this was Winterbottom's intention, but the movie actually feels like a direct rebuke to "Slumdog" director Danny Boyle, and arguably to the entire culture of Bollywood as well.

Boyle's film combined a thoroughly formulaic romance with moments of grotesque horror and the showoffy visual pyrotechnics of cinematographer Anthony Dod Mantle (not to mention an entirely extraneous Bollywood dance number). In "Trishna" the love story and the horror movie are the same thing, and technique never interferes with Winterbottom's wide-canvas portrait of contemporary India, which extends from an impoverished village in Rajasthan (an enormous state of remote deserts and mountains in northwestern India) to an unbelievably luxurious tourist hotel with a menagerie of birds and animals to the overcrowded beaches and Champagne-fueled elite parties of Mumbai. (This film's cinematography is by Marcel Zyskind, Winterbottom's longtime collaborator, who's never done better work.)

Pinto gets to show off her Bollywood dance moves in this movie too, but to far greater and subtler effect. As a penniless teenager who goes to work at a hotel managed by Jay Singh (Riz Ahmed), the hard-partying son of an Indian-born British millionaire, Pinto's Trishna dances in front of the TV set, like millions of other girls all over India and the world. Later, as Jay's live-in girlfriend in a Mumbai beachfront apartment, Trishna's dancing briefly opens a window of possibility onto a new kind of independent life, far from the caste-bound and gender-bound universe of her family and hometown back in Rajasthan. But as in Hardy's great novel of sex and power in Victorian England, Trishna is ultimately not much more than a piece of property to Jay, and subject to his whims.

It would be entirely wrongheaded, however, to suggest that either "Trishna" or "Tess of the d'Urbervilles" is a deterministic universe that offers its heroine no way out. One of Winterbottom's great accomplishments in "Trishna" is to establish that Pinto can actually act, after a sequence of roles -- from "Slumdog" to "You Will Meet a Tall Dark Stranger" to "Miral" to "Rise of the Planet of the Apes" -- in which she seemed utterly lost, if undeniably lovely. Another way of putting it is that Winterbottom enables Pinto to use her air of wounded-deer vulnerability to capture a convincing young woman who dares to dream big but lacks the courage, confidence or education to follow through on her dreams, and suffers tremendously as a result. Trishna loves Jay, despite abundant evidence that he's a thoughtless, feckless playboy, and without doubt that's a great weakness in her character. A great deal of the tragedy in this story lies in the fact that the world offers her chances -- not many, but a few -- and she cannot or will not take them.

It's usually best to avoid other reviews of movies I'm writing about, but in this case I want to argue vociferously against the proposition (advanced, I think, by some of Winterbottom's most loyal fans) that "Trishna" is somehow a minor or misfit work. Those who love this adventuresome director for his more self-conscious flourishes (as in, say, "Tristram Shandy" or "24 Hour Party People") may find this movie too straightforward, admittedly. But regular moviegoers won't know or care about that, and I think "Trishna" is a gorgeous accomplishment, a shattering tale of love gone wrong, loaded with visual splendor and emotional power, that ranks among his best films. (As does "Jude," the 1996 Hardy adaptation that first established Winterbottom as an international-level art-house director.) I don't want to accuse Winterbottom aficionados of turning up their noses at something that is so obviously a "women's picture" -- but, hell, that's what the problem is, right?

Jay, the Indo-British playboy, first encounters Trishna on a boozy tour of India with his buddies, while she's doing a traditional dance performance at a tourist hotel. He's immediately and genuinely struck by her freshness and innocence and beauty, and we can't blame him. Ahmed, a British comedian and rapper also known as Riz MC, gets full marks for playing Jay as a highly recognizable mixture of blindness, privilege and good intentions. He can be arrogant and cruel, and he will eventually do contemptible things to Trishna, but just because he's the villain in this story doesn't make him inhuman. He too will suffer for love -- and will be destroyed by it, at a fundamental and personal level -- long before the story's violent conclusion. (No spoilers! But a lot of you read the book in college, right?)

After Trishna's father is seriously injured in a gruesome road accident, Jay offers her a job, and it's not fair to say that he's only thinking about getting under her sari; he feels a sentimental, rich-guy affection for her long before they sleep together, perhaps as a representative of the authentic India his dad left behind for London club rooms and tea roses, many years earlier. (Roshan Seth, a terrific British character actor of Indian origin, has a brief and perfect appearance, oozing cognac from his pores as Jay's father.) Even after Jay gets Trishna pregnant, she runs away to have an abortion, and as dire as her life might have become, the final tragedy of their love affair might have been avoidable if he hadn't convinced himself that he couldn't live without her.

When Jay takes Trishna to Mumbai, captured here in a far more complicated fashion than in "Slumdog Millionaire," a treacherous and inviting new world opens up for her, a world of dance studios and movie shoots and gay men who curse and diva-like starlets whom Jay may or may not be sleeping with. One of the ways Winterbottom has altered Hardy's story -- although not much, arguably -- is by suggesting that Trishna herself chooses the penultimate cruel twist. No one forces her to follow Jay to a remote hotel back in Rajasthan, where he withdraws to a grandiose 15th-century maharajah's palace, increasingly isolated and embittered, and she is abruptly demoted from girlfriend (and apparent social equal) to personal servant and concubine.

As a fatalistic story of doomed love in a troubled country, "Trishna" can be read as a response to current Indian cinema, which has largely abandoned the humanist-realist tradition of Satyajit Ray (clearly an influence here) for the all-singing, all-dancing, every-genre-at-once spectacles that dominate the box office across South and Southeast Asia. On the other hand, I'm sure Winterbottom would reject any insinuation that he arrived in India with some sort of crypto-imperialist agenda. Another interpretation would be that "Trishna" is the next stop (and the most effective, by far) on the Michael Winterbottom gender-studies world tour, following his brutal adaptation of Jim Thompson's Texas noir "The Killer Inside Me" and Angelina Jolie's star turn as Mariane Pearl in "A Mighty Heart." This is one of the best and bravest of recent adaptations of classic literature; if you're even a little bit intrigued, ignore what others say and don't let it pass you by.

"Trishna" opens this week in New York and Los Angeles, with wider release to follow. Beginning July 20, it's also available on-demand from many cable and satellite providers.