The most awful episode yet of HBO's Aaron Sorkin show was also the most fun to watch. Except for the Coldplay loop 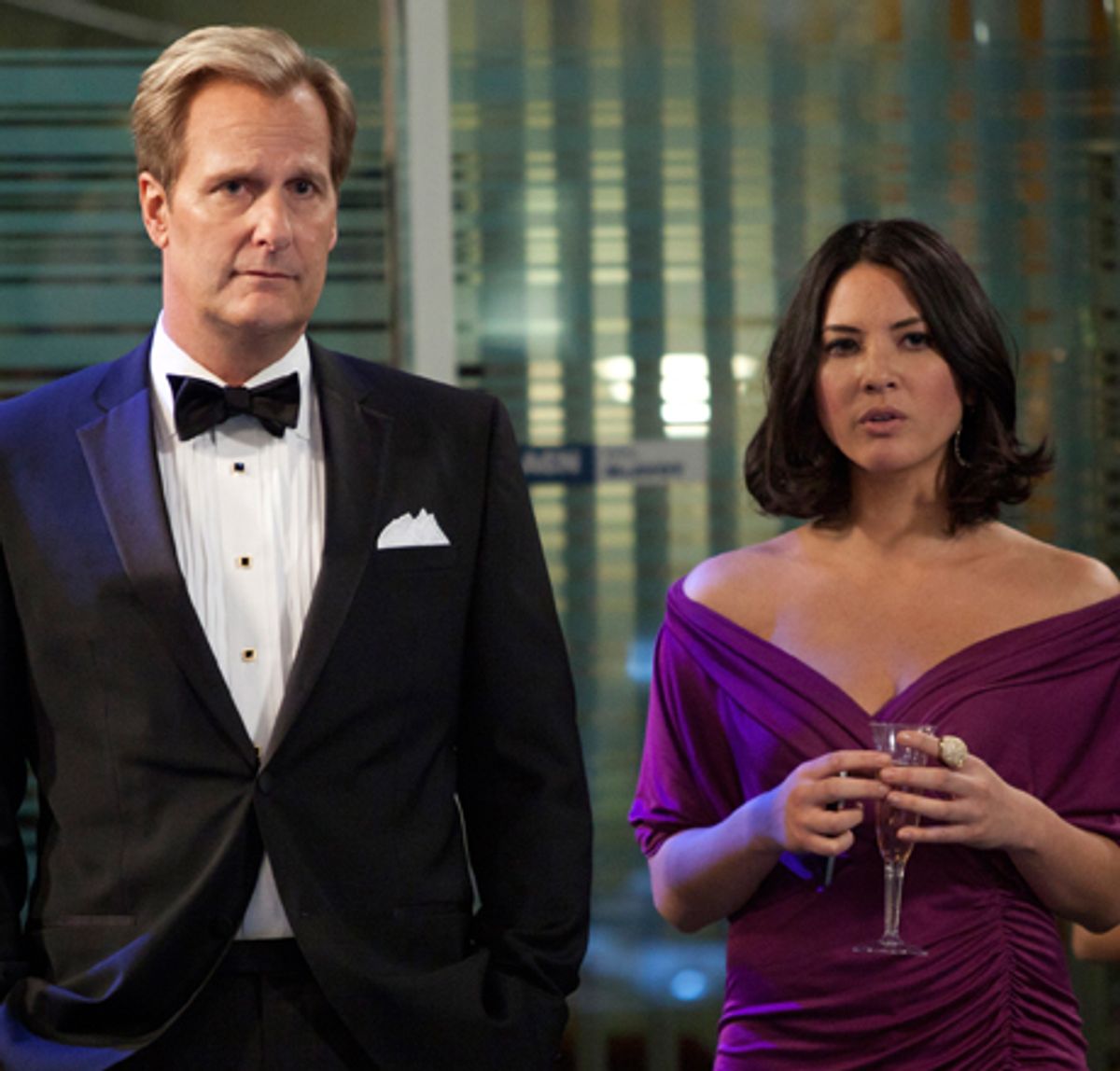 HBO’s “Newsroom” has been on the air for four weeks now. In its first three episodes, it has been idling around mediocrity, occasionally pulling out a cute, zippy or cutting sequence but  more often delivering a smug, condescending or self-righteous one. Last night’s installment was a serious escalation of all that has come before, ramping up things to a new fantastically horrible — or maybe horribly fantastic — level. Bad as it was, it was the first episode of this show that I have really enjoyed watching.

A friend described the viewing experience as follows: If you were using one of those monitors the cable news channels bust out for the debates, where people turn a knob to show how much they like what a candidate is saying and the results run across the bottom of the screen like a funky heart-monitor line, it would have been spiking from top to bottom, between pure hate and pure pleasure. At some point, all of the things that should have filled me with disdain and disgust, like a Coldplay song playing in a near endless loop to signify seriousness, just made me laugh. Last night, “Newsroom” inadvertently transformed itself from a failed civics lesson into a far messier and diverting failed civics lesson.

Here is a not-at-all exhaustive list (please, add your own thoughts) of some of the terrible things from the episode that I thoroughly enjoyed.

— Hope Davis appeared in a thankless cameo as an employee of a gossip magazine called TMI. Even after Will tells her, “I’m saying with all possible respect, I would have more respect for you if you were a heroin dealer,” and she is winding up to toss a drink in his face, she explains that she was a “sure thing.” Bloviators in tuxedos never have more game than they do in Sorkinland.

— Will keeps proclaiming he’s on “a mission to civilize,” like that is not an extremely loaded, paternalistic, colonialist life goal barely more sympathetic than the white man and his burden. Each time Will declares he is on a "mission to civilize," I expect Sorkin to follow this thought to its semi-logical conclusion and stage a defense of colonialism as another form of wrongfully maligned elitism we should seriously consider bringing back.

— At least that would be more interesting than Charlie and Will’s exchange — “I’m not an elitist.” “Be one”— about Will’s taste in women.

— The entire cloying through-line about how Bigfoot may be real. What did the Loch Ness monster ever do to Aaron Sorkin?

— Every employee of "News Night" was, willingly, at the office for New Year’s Eve. And then on a Saturday. To hear a lecture about Bigfoot.

— Not specific to this episode, but the contrast between Sam Waterston’s hair color and his jet black eyebrows makes it impossible for me to focus on anything he is saying because I keep waiting for some Muppets to pop into the scene and sing a song with him.

— Kathryn Hahn also made a thankless cameo — never let it be said Sorkin can’t cast women if he doesn’t know what to do with them —  as another woman Will goes on a date with, but this one carries a gun and a joint in her handbag. And, also, she is so crazy she will rat you out to the gossip columnists if you don’t want to date her again.

— Because all women on “Newsroom” must be overly emotional in the workplace, Alison Pill’s Maggie called out the guy she has a crush on but who is not her boyfriend — but is her boss —  for sleeping with someone else, in front of the entire staff (conveniently assembled on a Saturday at the office to hear a lecture on Bigfoot).

— We were reminded that Mac can get fired at the end of every week, a dramatic construct that has been all but abandoned since the pilot.

— The ratings guy on set screaming at everyone to declare Gabrielle Giffords dead, even though That Is Only Something Doctors Can Do.

— Coldplay’s “Fix You” is four minutes and 55 seconds long. It played for the last six minutes and 45 seconds of this episode.

— Bonus fun, if you watch a second time: Early in the episode, Hope Davis' character tells Will, "You seem lonely and broken to me, but don’t worry, I can fix you."