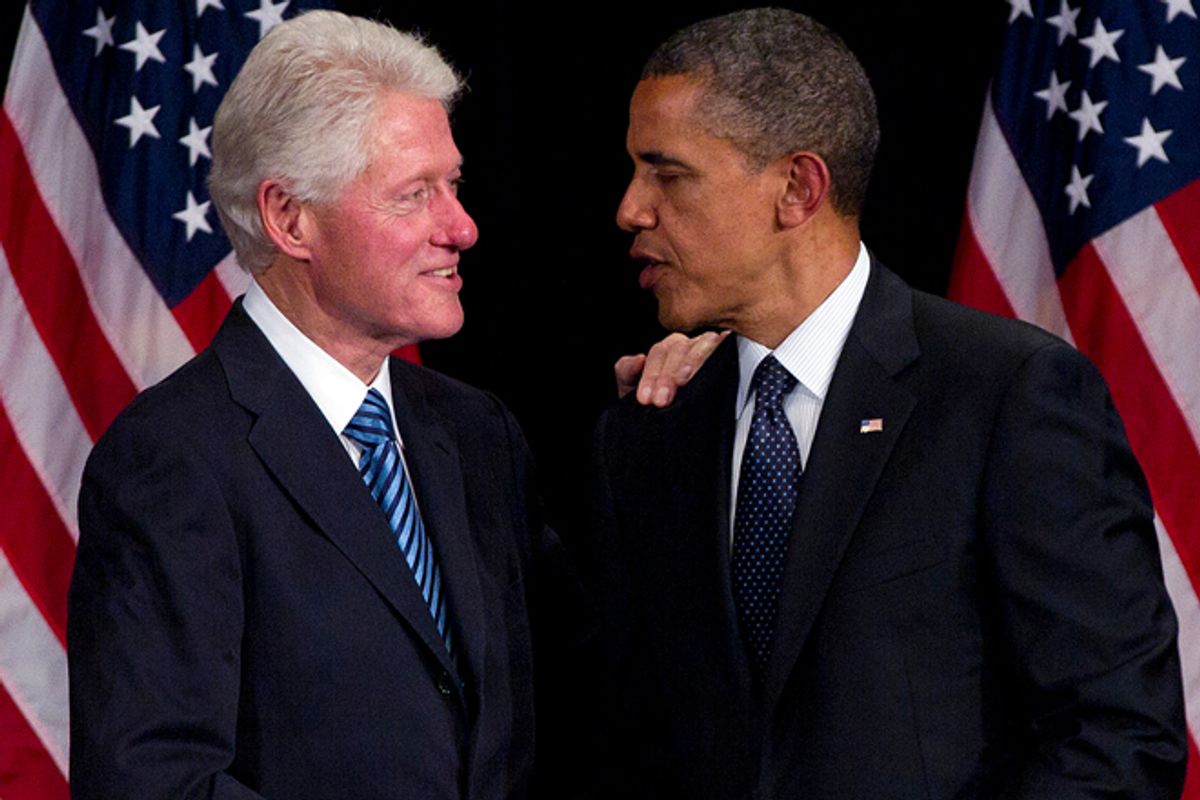 Astute campaign analysis from the Washington Post's fiercely independent conservative blogger Jennifer Rubin: A news event that seems to be a misstep by Romney is in fact a thrilling Romney victory that has Obama cowering with fear.

Here in reality, Mitt Romney seized on a misleading right-wing talking point about an obscure TANF policy change from Barack Obama's Department of Health and Human Services and used it to create a blatantly dishonest attack ad (and stump speech attack line). Then, still in this reality, Bill Clinton, whose name and image were invoked in the Romney attack ad, released a statement saying plainly that Romney's ad was dishonest. Bill Clinton remains broadly popular nationally, because his time as president was a time of relative prosperity for many Americans, which is why the Democrats have given him a prime speaking slot at their upcoming convention. The last Republican president, by the way, won't be speaking at the Republican convention. In fact, he won't even attend.

In Jennifer Rubin's world, a world where everything is Good News For Mitt Romney, this is a "debacle" for Obama. It may shock you to learn how much Jennifer Rubin admires Bill Clinton, or at least the conservative anti-Obama Bill Clinton that she has invented for the purposes of this post. "One wonders how Clinton feels as Obama repudiates the centrist vision that made Clinton the most successful Democratic president since Harry Truman," she writes. (He feels OK enough about it to stump for Obama?)

This is my favorite part of the post, where Rubin somehow turns Clinton releasing a statement calling Romney dishonest into a confirmation that Clinton totally agrees with Romney's attack:

The Obama campaign, plainly fearing what Bill Clinton would say unscripted, released a statement by Clinton last night that was, at most, a thin rebuke to Romney. In it, Clinton essentially confirms Romney’s take on the change: “The recently announced waiver policy was originally requested by the Republican governors of Utah and Nevada to achieve more flexibility in designing programs more likely to work in this challenging environment.” In other words, the Obama administration opened the door to states’ defining “work” as everything from self-help classes to weight-loss programs. Clinton’s statement actually undercuts the opening line of the release (“Governor Romney released an ad today alleging that the Obama administration had weakened the work requirements of the 1996 Welfare Reform Act. That is not true.” Well, actually Clinton explains that this is precisely what it does.)

If that seems "understated" you might want to return to the first sentence of the statement where his word choice was the more plainly stated "not true."

Then Rubin moves on to just outright imagining that if Clinton were to speak extemporaneously on the subject of welfare reform he'd assuredly hurt Obama even more than he did with this secretly pro-Romney statement, written in a code only Jennifer Rubin can decrypt. Then she writes: "And the prospect of Clinton speaking at the Democratic National Convention has, more each day, Republicans licking their lips at the prospect of Clinton vs. Obama comparisons."

Here are the various things Jennifer Rubin would have us believe, in this one, brief post:

And all this is ignoring the divorced-from-reality idea that Obama represents a significant break, policy-wise, from the Clinton era (hence his filling out his administration with longtime anti-Clintonites like Larry Summers, Rahm Emanuel, Jack Lew, and ... Hillary Clinton).

Again, Rubin is just an outright shill for the Romney campaign, and it's bizarre that the Washington Post thinks this is "good conservative blogging."