Is an anchorwoman's weight our business?

A viewer harshly criticizes Jennifer Livingston for being heavy. And she fired back 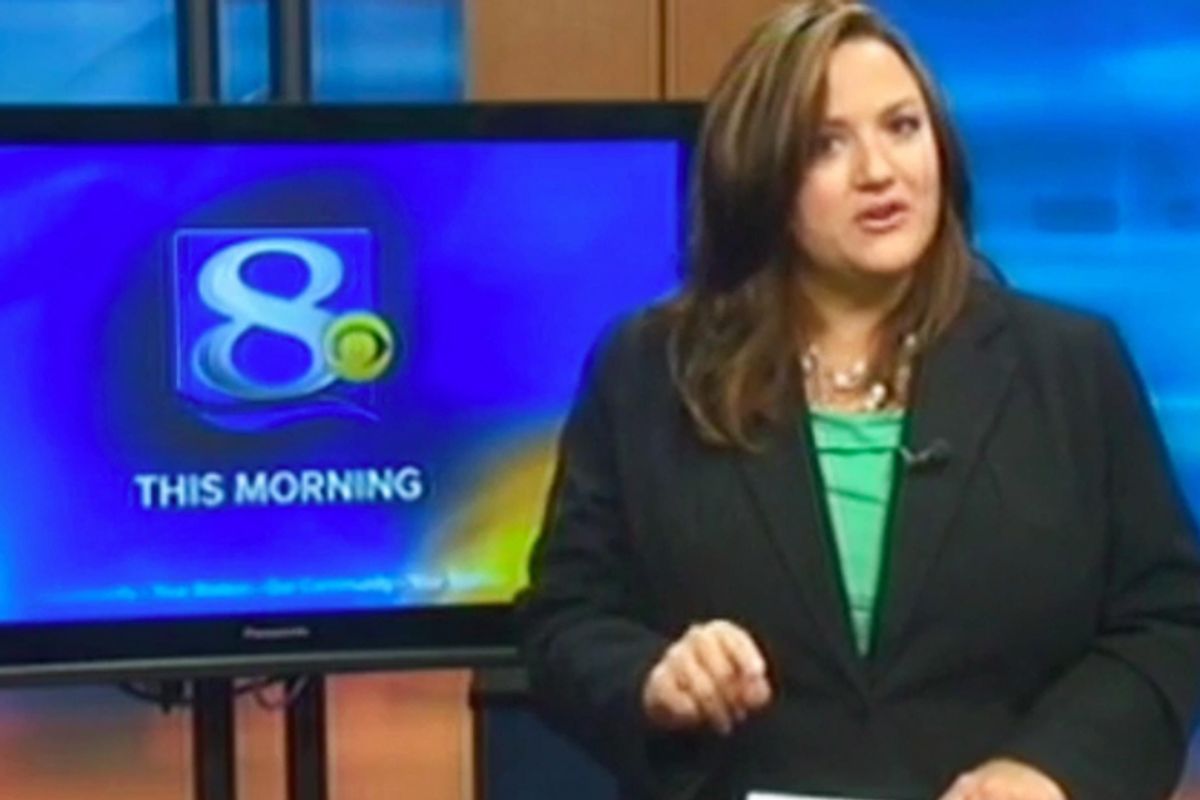 When Kenneth W. Krause turned on his television one recent morning, he didn't like what he saw. As Mr. Helpy Helperton wrote in his letter to La Crosse, Wis., news anchor Jennifer Livingston last Friday, "I was surprised indeed to witness that your physical condition hasn't improved for many years. Surely you don't consider yourself a suitable example for this community's young people, girls in particular. Obesity is one of the worst choices a person can make and one of the most dangerous habits to maintain. I leave you this note hoping that you'll reconsider your responsibility as a local public personality to present and promote a healthy lifestyle."

Shockingly, Livingston did not immediately look down at her own body, suddenly realize she is not built like Brooklyn Decker, issue an immediate apology to her viewers for having the gall to appear on television, and go into hiding pending the loss of a Kenneth W. Krause-approved number of pounds.

Instead, her husband and fellow WKTB anchor Mike Livingston posted the letter on his Facebook page, saying it "infuriated" him and "makes me sick to my stomach." By the end of the weekend, it had been commented on and shared thousands of times. And then on Tuesday, Jennifer Livingston had a few words for her letter writer. She went on the air and, in four minutes, presented a powerful, articulate and incredibly classy retort not just to Kenneth W. Krause but to the culture of body-snarking in general, to the epidemic of entitled, crass, amateur critics who believe that other people's bodies are any of their damn business.

"Attacks like this are not OK," she said, adding that while she's perfectly aware of her size, "You don't know me. You are not a friend of mine … You know nothing about me other than what you see on the outside, and I am much more than a number on a scale." She continued, clearly emotional, speaking about this kind of open, harsh criticism, noting, "As the mother of three young girls, it scares me to death … If you are at home and you are talking about the fat newslady, guess what? Your children are probably going to go to school and call someone fat. We need to teach our kids to be kind, not critical, and we need to do that by example." It's a beautiful statement, a very important one, and one that's gone viral precisely because it so desperately needed to be said. And it's exactly what a suitable example to young people, girls especially, looks like.

Krause responded to Livingston's remarks by digging in his heels, issuing a statement to the station that "Given this country's present epidemic of obesity and the many truly horrible diseases related thereto, and considering Jennifer Livingston's fortuitous position in the community, I hope she will finally take advantage of a rare and golden opportunity to influence the health and psychological well-being of Coulee Region children by transforming herself for all of her viewers to see over the next year, and, to that end, I would be absolutely pleased to offer Jennifer any advice or support she would be willing to accept." And I would be absolutely pleased to suggest he hold his breath for that one.

Livingston has, expectedly, also drawn out other critics for speaking out on the subject, including the Facebook commenter who says the letter  "is a wake-up call that people should take care of themselves" and the YouTube viewer who says, "Guy seems concerned about her health and the health of his community." But here's the thing: Yes, dramatically rising overall American obesity rates are bringing with them serious health issues like heart disease and diabetes, especially for children. But that is not nor ever should be an indictment of any one of our fellow human beings. We can agree that it's an important goal for all of us, especially families in low-income neighborhoods where fast-food chains flourish and grocery stores are scarce, where school lunch consists of pizza and physical-fitness programs have disappeared — to work together to improve those conditions. That is not at all the same as making knee-jerk assumptions about the "lifestyle choice" of any person who doesn't conform to a very narrow and wildly inaccurate vision of what a healthy person looks like. And only a raging tool would confuse an interest in "health" for what Livingston rightly calls "an attack on my appearance."

Making insulting assumptions about individuals, shaming them for their size, has nothing to do with "health and well-being." Every time someone says out loud that Gaga is packing on pounds or that the lady at the Wal-Mart is looking a little meaty, it's just another contribution to a culture of ridicule, another opportunity for every imperfect person to take on a little more shame and self-doubt.  It's an enormous burden on all of us. And that's the weight we really need to lose.