Marissa Mayer can work if she wants 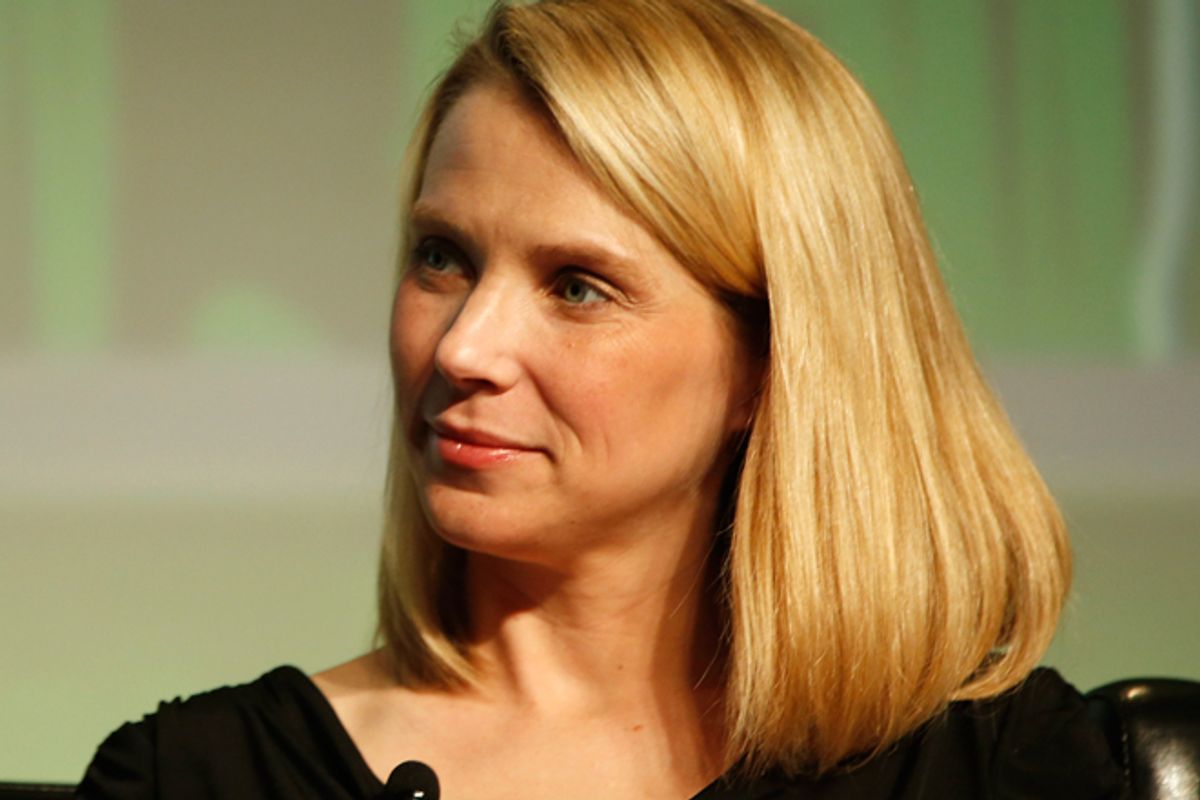 The concern trolling about Marissa Mayer started long before her son was born earlier this week. It began last summer, at precisely the moment the world learned she'd been named Yahoo's new CEO — and that she was pregnant. Her announcement then that "My maternity leave will be a few weeks long and I’ll work throughout it" made for all kinds of morning news show banter and tsk-tsk opinion pieces about how this accomplished, educated woman was clearly in waaaay over her knocked-up head. And now that she has brought forth her issue, and Yahoo has stated, "She will be working remotely and is planning to return to the office as soon as possible (likely in one to two weeks)," it's time for the pundits to stick their noses in her placenta yet again.

This week at New York, Ann Friedman takes Mayer's story — and the very real issues of insufficient paid maternity leave and the "professional repercussions" for those who do take time off — to leap off the rails with the radical case for "mandatory" parental leave to "normalize" family time for new parents. Making people stay home with babies — that's way more progressive than making them go to work, right?

Friedman's sympathy for parents who are pressured by their financial situations or fear of reprisal to return to work earlier than they want or need is admirable. It's just too bad it comes at the price of a near constant stream of digs at Mayer and her ilk. Though she has grudgingly taken the view, "Of course, Marissa Mayer should do what’s good for Marissa Mayer," Friedman also describes her as a "superwoman" not once but twice, one whose choice has been that of "one-upping dudes in their dudeliness" and "fitting the mold, not breaking it."

And while Friedman's suggestion of mandatory parental leave may be a joking one (at least I hope to God she's joking), underneath is the real and unfortunate assumption that everyone is working more than they want to. It's certainly true that career culture isn't what it used to be, and the assumption that every worker will always be on call to reply to a Saturday night email or keep brainstorming through a vacation is not a healthy one.

But Marissa Mayer isn't betraying the Cause of Womanhood by making a choice that might differ from somebody else's. Not every new mother desires or requires the same amount of maternity time off. It's entirely possible to choose to go back to work, to enjoy the creative and intellectual stimulation of other adults, and still be a kick-ass mom with a well cared for, nurtured child. In fact, much as our culture tries to impose the dreamy diaper ad ideal that bonding with a baby is a 24/7 bliss ride, there are parents for whom having a few hours in the day away from crying and being puked on is what keeps them sane and grounded. That shouldn't be shameful.

Over on Slate, however, Allison Benedikt is very distressed about this, fretting over the "warranted concern" that "Mayer's chosen work-life imbalance might put pressure on all of us." Because, of course, an adult making an autonomous choice about how she spends her time must be imbalanced.

But what really upsets Benedikt is that Mayer "should want to do something different than what she wants to do. Because it's nuts to ignore that there is a BABY involved here ... I do think she has a responsibility to, you know, parent her infant full time for awhile." Holy crap, I don't even know where to begin because the vein in my forehead is throbbing to a distracting degree right now. How about I just leave it at: Don't tell other women what they "should" want. Even when there's a PRECIOUS ALL-CAPS BABY involved? Christ.

She goes on to write, "If you are fortunate enough to be in the position where you can stay home — if your professional and family situation allows you to stick close to this new person you just made, to try to decipher its strange rhythms and nap when it naps and let your crazy new mom hormones hang out, along with some other wacky body parts and fluids that won’t be going back to normal for awhile — you should." There you have it — the "fortunate" stay home, because they should.

That mind-set doesn't go away when a woman's child is 6 weeks or 6 months or 6 years, by the way. Oh, my goodness, no. As a working mom, I can tell you that I've lost count of the times I've heard stay-at-home mothers tell me over the years how "lucky" they are they don't "have to" work. The message is always there, subtle and not so subtle — it's OK to like your job, lady, as long as you admit that you'd rather be mommying, because that's your real and "best" job. After all, everybody knows you can totally quantify how good a mother a woman is, how much she really loves her child, by how much time she takes off from her career — or at least how much she would if she could if we lived in a fair world.

This kind of stuff is not supportive of mothers. This is not contributing to a culture that esteems them. This is speculative BS wrapped up in the guise of creating a more nurturing, holistic approach to work and parenting. But for real balance to work, it can't just favor the women who currently don't get great maternity leaves and are coerced or outright obliged to go back to work before they and their babies are physically and emotionally ready. It has to be about being supportive to all women. It has to give those who say, "Yeah, I'm ready to go back," before a time frame that is somehow not within acceptable good-mommy parameters credit for knowing themselves and their needs, for knowing what works for their families. It has to shut the hell up already with the sly innuendo that a woman who goes back to work is either a poor unfortunate or a careerist bitch.

We have the entire history of the human race to draw upon the precedent of women having babies and then returning to their other obligations with skill and devotion. They're not all superwomen or victims of the patriarchy either. If we truly believe in female autonomy, if we believe in valuing mothers, we don't give them lip service with an "I guess it's OK for you but you really shouldn't behave or think like that, OK?" We treat their minds and their thoughts and their desires with respect — the same respect we claim to give their wombs.