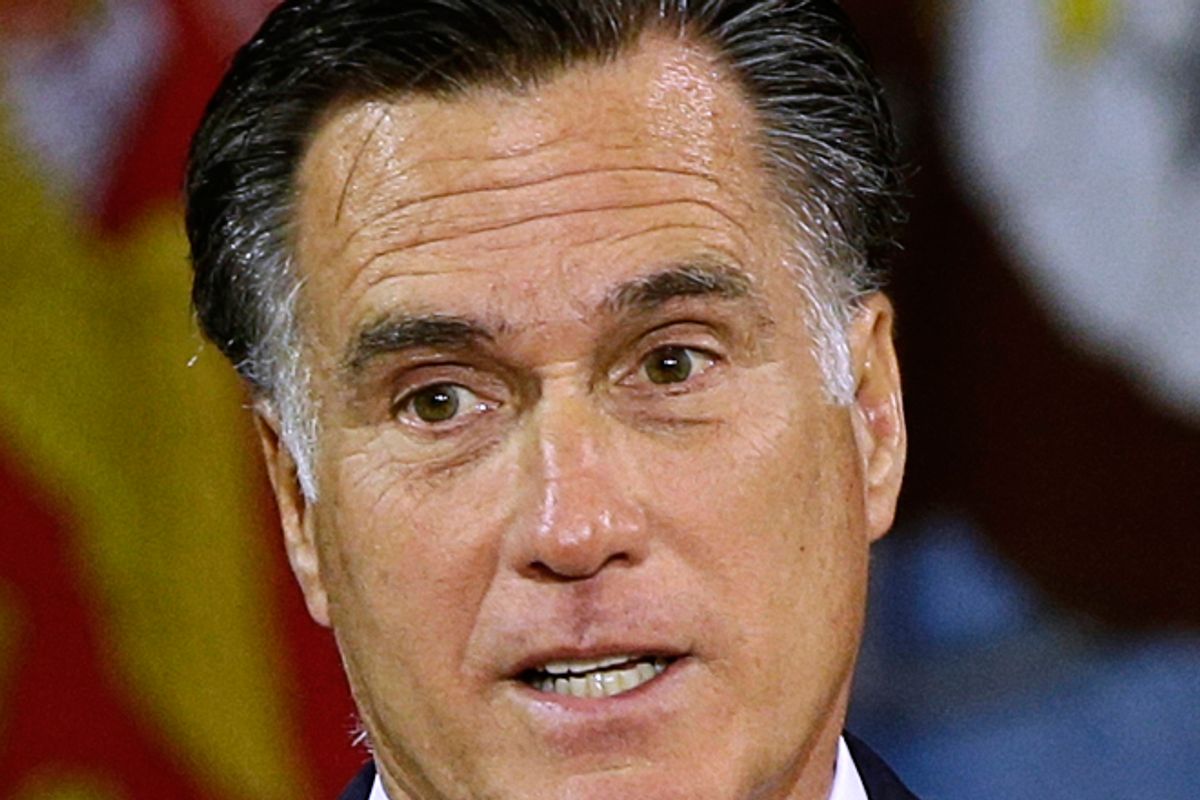 With just six days before Election Day it’s time to ask: Who’s going to win? If you ask the Romney campaign, they’ve got this thing in the bag. "The race comes down to independents. We lead among independents,” Romney pollster Neil Newhouse said on a conference call with reporters on the state of the race this morning. “The firewall that I think [the Obama campaign] talked about was Iowa, Wisconsin and Ohio. Right now their firewall is burning,” added Rich Beeson, Romney’s political director. Meanwhile, Karl Rove predicts Romney will sail to victory with at least 279 electoral votes (“probably more”); the “unskewed” polls show Romney winning in a massive landslide with 321 electoral votes to Obama’s 217; and Breitbart bloggers say “Mitt Romney is now running away with this election.” Indeed, national polls slightly favor Romney.

Of course, the state polls say something else, and state polls are what really count. Obama is ahead, if marginally, in almost every swing state. This means that Obama can afford to lose in a few states he’s currently winning, while Romney has to win every single state he’s currently winning plus steal a bunch of states from Obama, especially Ohio, where he’s never fared well. Some recent polls even show Obama leading Virginia and Florida, both of which Romney needs. These numbers have made Nate Silver confident enough to bet $1,000 that Obama wins (his model gives Obama a 79 percent chance of victory at the moment).

So who’s right? Since we’re now in a post-Nate Silver world, where pundits’ gut instincts are more important than math, let’s just throw his numbers out the window and look only at what the Romney campaign has been up to in the critical week before the election. Maybe we'll find some clues to what they really think about Mitt's chances.

Today, we learn about a new ad the campaign released Tuesday -- but did not announce to the press -- that ties Barack Obama to Fidel Castro and Hugo Chavez. "Who supports Barack Obama?" a narrator asks in Spanish before video clips play of Chavez and Castro’s daughter praising Obama.

The campaign also doubled down this week on its totally dishonest TV ad on the auto bailout with an even phonier radio ad, which it also did not announce to reporters. The ad suggests that Jeep, a division of Chrysler, which was bailed out by the federal government, is moving production and jobs to China. Jeep is doing no such thing and is actually expanding jobs in Ohio. The spot sort of backfired when the auto execs slammed Romney for lying about their companies, leading to less-than-flattering headlines in Ohio like this one from yesterday: “Obama devotes day to storm response; furor erupts over Romney auto ads.”

On top of that, the campaign released a third ad -- again, without alerting the press -- reviving the entirely false and vaguely race-baiting myth that Obama is gutting the work requirement in welfare.

Does deploying these ads at the last minute really seem like a move from a campaign that feels confident it’s going to win? These are some of the ugliest and most dishonest attacks of an unusually ugly and dishonest campaign. They’re the kind of ads you expect from a secretive outside group, not the campaign itself. They’re the kind of ads a campaign keeps in a glass case labeled, “Break in case of emergency.” They feel desperate.

Now take a look at where Romney is campaigning in the waning days of the campaign. There’s no bigger weapon in the campaign’s arsenal than the candidate himself, so where it sends him is a good sign of where its priorities are. The Romney campaign has been insisting that it's in such a strong position that it's expanding the map by making a play for mostly safe blue states like Minnesota, Pennsylvania, Michigan and even New Mexico (where Obama won by 15 points in 2008). And indeed, both campaigns or the super PACs supporting them are now up with ads in these states.

But Romney isn’t going anywhere near those states. He’s doing three events in Virginia today, which he should have put away weeks ago so he could concentrate on other states. Tomorrow he heads to Wisconsin, where’s he’s still the deep underdog, and after that Ohio, which he absolutely needs to win, but is still down. Then it’s to Colorado, where he may win but Obama has been making a mini comeback. Then he’s off to Iowa and New Hampshire, where he’s down, but could really stand to win.

More likely, the “expand the map” strategy is about his campaign and their allies having more money than they need in the real swing states and a desire to “keep the ‘momentum’ storyline going,” as Amy Walter notes, even if it’s no longer true.

As Steve Kornacki pointed out this morning, the entire “the polls are wrong” argument is based on a faulty reading about the role independent voters play in this election. Romney keeps winning among independents but losing overall in polls because lots of conservatives no longer self-identify as Republicans, but effectively vote that way.

And at least in private, Republican leaders seem to be finally acknowledging the reality -- well, at least part of the reality. Politico’s Mike Allen reported this morning that “top Republicans are already hinting that if Romney loses, his people will blame the storm for stalling his momentum.” Romney’s momentum had clearly stalled before Hurricane Sandy struck, and there was really only a brief moment since Romney emerged as the GOP nominee in April that he looked like he was winning. But hey, whatever helps Republicans sleep until Election Day.