Polls show white voters who fear racial change will back Romney. It's their loss. Let's hope it's not all of ours 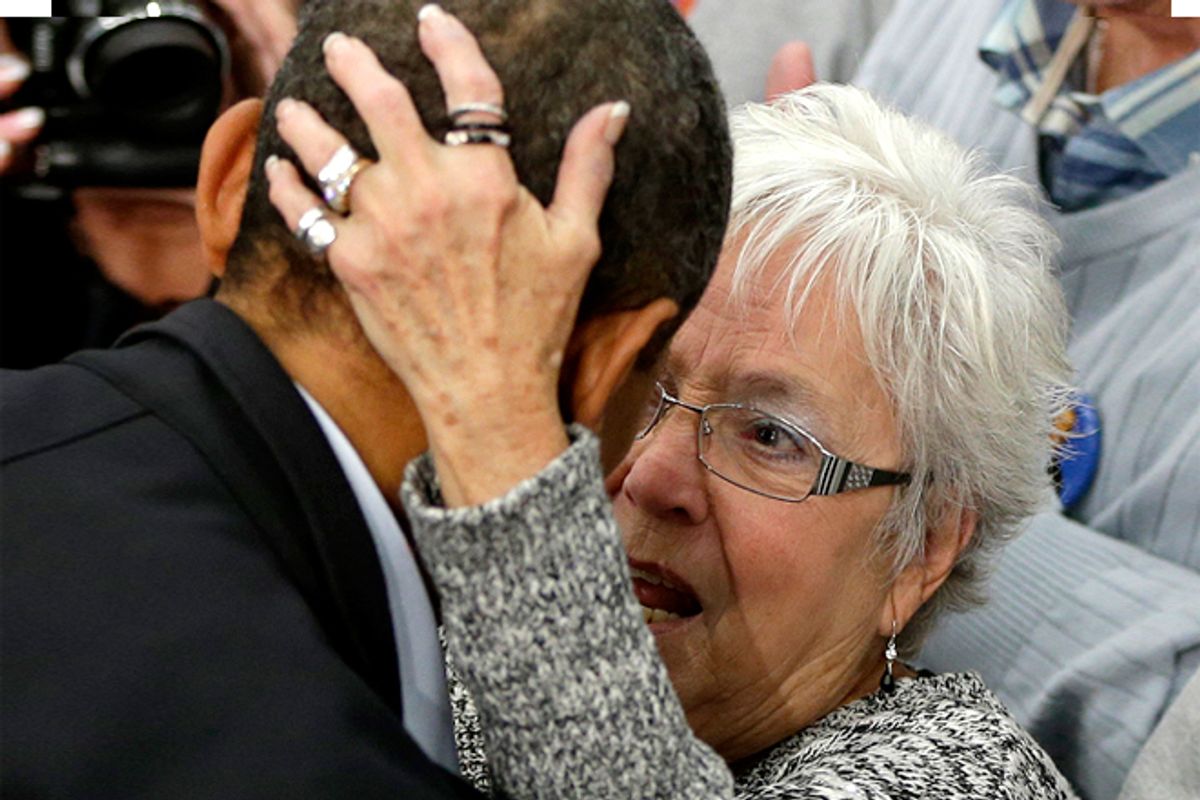 We have a lot of iconic images of the Obama era. Far too many are ugly. The photo of Arizona Gov. Jan Brewer, Tea Party darling, disrespectfully waving her pointed finger in the president's face is one of the worst.

Maybe that's why I loved the very different image of an older white woman that's attached to this story. She is taking the president's head in her hands with passion, like she might a grandson. AP merely termed her an "unidentified Obama supporter" in its caption, so I don't even know who she is. I wish we did.

Theoretically, this woman could be Obama's grandmother, who was white herself.  Oddly, it's a funny X-ray of my other favorite Obama image: A young black boy touching the president's hair to see whether it felt like his own. They represent two very different impulses to reach out and touch this very singular American president.

It pains me that the presidential race is coming down to race. I want to believe that women like this lovely unidentified Ohio voter are in the majority among white people, but I know they're not. The president trails Mitt Romney 54-37 percent among whites in the latest Pew poll (although that's down from 58-34 two weeks ago.) He's behind with white women who are older than 50 by 51-43; the gap is bigger with the same cohort of men, 55-37. The only group of whites Obama is winning nationally is 18-29 year olds, where he leads Romney 46-44, less than he did in 2008.

To an awkward extent, Obama's fate today comes down to white people. Pollsters and analysts agree: If the electorate that turns out in 2012 is more than 75 percent white (it was 74 percent in 2008 and 77 percent in 2010), Obama almost certainly loses. If it's 74 percent or less, Obama wins. Clearly, if Democrats behaved like Republicans, they'd look for ways to suppress the white vote.

Let's go there: What does it mean that white Republican governors in swing states worked hard to limit voting rights after the president's stunning and overwhelming victory in 2008? How can we tolerate the fact that Rick Scott, John Kasich and Scott Walker and their GOP allies took the lead in Florida, Ohio and Wisconsin in restricting early voting hours or otherwise limiting voter access in their states, after the Democratic coalition of young, non-white and low-income voters, who are notoriously hard to get to the polls, helped elect our first black president? Should Mitt Romney win, God forbid, we will be debating that scandal for a long, long time. As long as Florida 2000.

I know I love this picture at least partly because I know white seniors are the least likely to support Obama and it pains me. That's why I loved Bill Clinton saying he gave up his voice "in the service of my president." I can feel the woman's warmth and empathy. She seems able to see her family, and her entire country, in his face. She doesn't have sufficient company: A recent poll by The Next America project shows that whites who fear racial change supported Romney 2-1, while whites who welcomed it backed Obama 3-2. Sadly, the poll showed that a slight majority of whites fear it, and they are likely to be older.

Sometimes I write about what the president can do to court white voters, particularly the white working class.  A stronger dose of economic populism and policies that make a material difference in their lives would help, as it has helped in Ohio and other economically battered states revived by the auto rescue. But I can also make it sound like I'm blaming the president for the implacable hostility of scared or angry white people. I'm not.

I don't know why so many anxious whites can't see their future in this president. He's one of the youngest presidents ever. He's the son of an immigrant.  He came from the middle class and rose into privilege via education. He's the embodiment of American exceptionalism.  You can oppose his policies but it feels un-American to me to despise him.

Still, watching the president close out his campaign before a hugely white crowd in Des Moines, Iowa Monday night reminded me he wouldn't be president without white support, either. Let's remember there are millions of white seniors like the woman in this photo, who back the president. If too many of them can't see their future in Obama's face, they're the losers. Let's hope they don't make the rest of us losers, too.