Pick of the week: A violent, sexy and startling love story

Pick of the week: Oscar-winner Marion Cotillard plays a paraplegic in love with a kickboxer in "Rust and Bone" 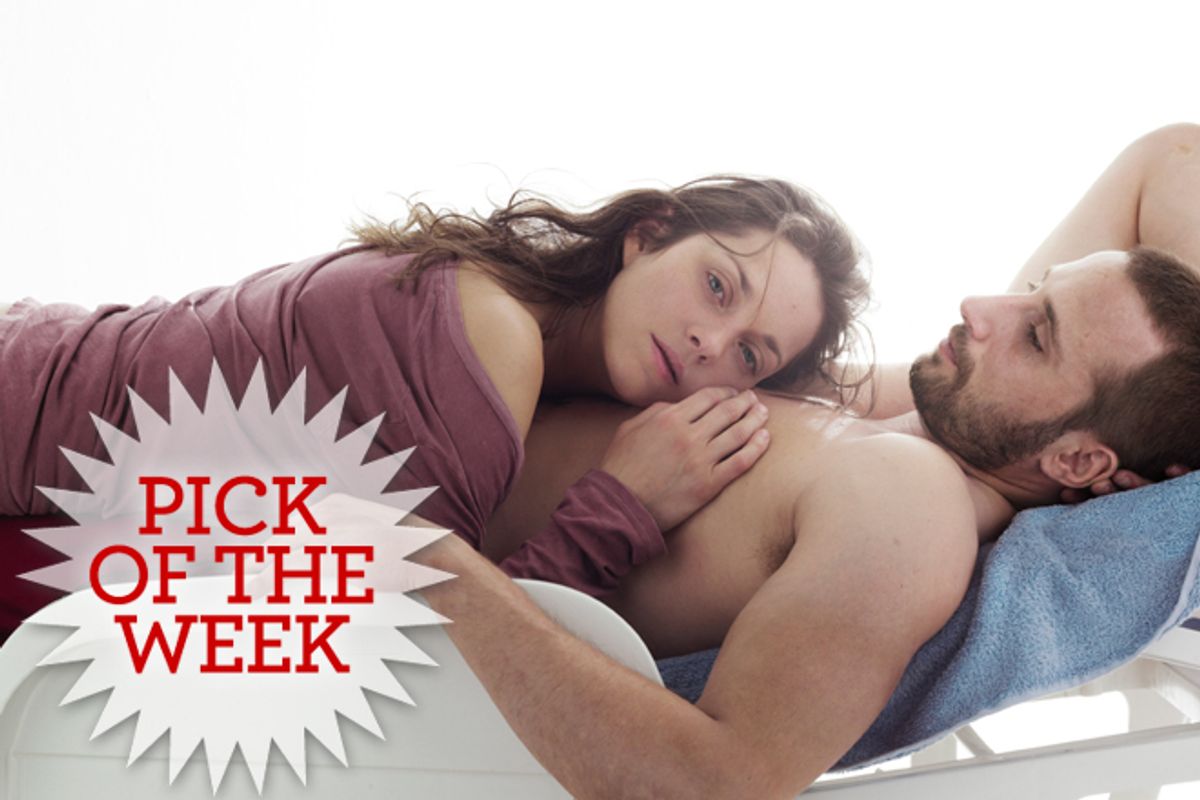 Marion Cotillard and Matthias Schoenaerts in "Rust and Bone"
--

If I tell you that “Rust and Bone” is a love story about a killer-whale trainer and a single-dad kickboxer, it sounds like one kind of movie. (Admittedly, not a kind you’ve seen very often.) But what if I add that it stars Oscar winner and “Inception” co-star Marion Cotillard as a woman who loses her legs in a bizarre accident? Or if I tell you that it’s a vibrant, violent and ferociously sexy film driven by a soundtrack heavy on Anglo-American dance-pop? (This is a movie to dance to, or make love to, not one to sit around with glasses of overpriced wine and chat about.) Then if I tell you it’s a French film, a showcase for extraordinary acting and moments of cinematic abstraction, an acrid social commentary, and in some sense an heir to the classic romances spun by Max Ophüls and Eric Rohmer and Jean-Luc Godard, it sounds like something else again.

None of that sounds like I’m describing the same movie, except to some tiny coterie of international cinema buffs out there who might say, “Oh, the new Jacques Audiard film. Well, of course.” Audiard is now 60 years old and has made just six features since moving from screenwriting to directing in the early '90s. He’s well-known in France and has twice won the César, or French Oscar, for best picture — for “The Beat That My Heart Skipped” in 2005 (an adaptation of James Toback’s “Fingers”) and the brilliant 2010 prison saga “A Prophet” — but remains completely obscure in America, which is at least mildly ironic. If all of French cinema for the last 30 years has been preoccupied with confronting the power and popular appeal of Hollywood, at least arguably, Audiard may be the most conspicuously Americanized of French directors. He makes genre films designed to thrill you and titillate you as well as engage your mind, and seeks an almost metaphysical fusion between 1970s Hollywood and the French New Wave. (Mind you, I could use that same sentence to describe Luc Besson, except that I’d have to take out the “engage your mind” part, and somehow sneak in the phrase “unbelievable garbage.”)

All of which is to say that my attempt to describe “Rust and Bone” adequately is likely to fail, and so is anybody else’s. You should just go see it, because it has a visual command and powerful narrative undertow all its own. It’s going to play art-house theaters, because it has subtitles and that means that only an infinitesimal percentage of the population is willing to give it a try. But you don’t need to read to understand the shot where you see a guy’s bloody molar go skittering across the ground like a runaway insect, or the dreamlike scene where a woman commands a killer whale with gestures, like a conductor before an orchestra. Not to mention the one where the killer-whale lady and the former owner of the molar have hot sex, and we can see clearly that both her legs end above the knee, and that she has had the stumps tattooed “DROITE” and “GAUCHE,” left and right. (There was a moment during the film when I thought I understood why she did that. But – sorry, it’s gone.)

In fact, “Rust and Bone” is specifically a movie about people who hardly talk at all, or at least not about their emotional lives. Here’s the big courtship scene between Cotillard’s character, the double-amputee whale trainer named Stéphanie, and the Belgian kickboxer cum security guard called Ali, played by Matthias Schoenaerts. They become friends, and she mentions one day after they’re cleaning up the lunch dishes that she hasn’t had sex since her injury and isn’t even sure the equipment still works. He nods and asks: “So do you want to fuck?” He doesn’t have to be at work for a while and doesn’t have another date or anything; he genuinely wouldn’t mind. And they claim chivalry is dead! (In an earlier scene, Stéphanie asks Ali why he’s carrying a kid’s toy en route to an illegal street fight. “For my son,” he responds. She’s known him for weeks and had no idea he had one.)

Cotillard gets the showier role in “Rust and Bone,” playing Stéphanie as a species of melodramatic heroine, a vain, somewhat spoiled woman who is thrust into a new relationship with her body and the world after her devastating accident. (Digital effects are used to remove Stéphanie’s legs, but it’s so convincing you’ll never ask yourself how it was done.) As she tells Ali during their first meeting, before the accident, she is used to attracting sexual attention from men and rather likes it. He is driving her home after rescuing her, in his role as nightclub bouncer, from an overly attentive suitor. She gives him a slight come-on signal, but first of all she’s got a boyfriend at home and second of all Ali blows it, observing that if she’s going to dress like a whore, she shouldn’t be shocked if guys get the wrong idea.

But it’s Schoenaerts’ performance as the muscular, laconic Ali (he isn’t Arab or Muslim; it’s a nickname) who holds the key to “Rust and Bone.” Here I go, attaching a brainiac interpretation to a movie that is primarily a visual and kinetic experience — the masterful cinematography is by Stéphane Fontaine, Audiard's usual collaborator — but I think “Rust and Bone” is about the relationship between the mind and body in contemporary society, and maybe also about the way late capitalism has stripped away so much of the veneer of civilization. Ali is neither an indecent nor a dishonest man. He works hard and doesn’t steal and never uses his physical strength to abuse the weak. He has traveled to his sister’s house in Antibes, in the south of France, after extracting his son from some dire criminal situation in Belgium. But he’s also instinctive and almost animalistic; as his offensive remark to Stéphanie suggests, he has poor judgment, doesn’t think before he speaks, and seems unconscious of the bourgeois social codes that once governed male-female intercourse. (It apparently doesn’t occur to him, for instance, that going to a nightclub with Stéphanie and then ditching her for an able-bodied girl is a move that lacks panache.)

It’s only partly accurate, and way too simplistic, to suggest that the twin demands of fatherhood and helping Stéphanie build a new life after her injury help develop a moral sense within Ali. It’s just as true to say that the brutality and directness of Ali’s existence — the fact that he makes money by beating other men and being beaten by them — shock Stéphanie out of her self-pity and connect her to the basic physical facts of being alive. But let’s go bigger than that: “Rust and Bone” is one of the year’s best films precisely because it can’t be boiled down to a message or synopsis. It’s an exercise in style that risks trashiness in search of transcendence, and it’s a sizzling celebration of the power of music, the power of images, and the electric, destructive power of the human body.

"Rust and Bone" opens this week in New York and Los Angeles, with national release to follow.