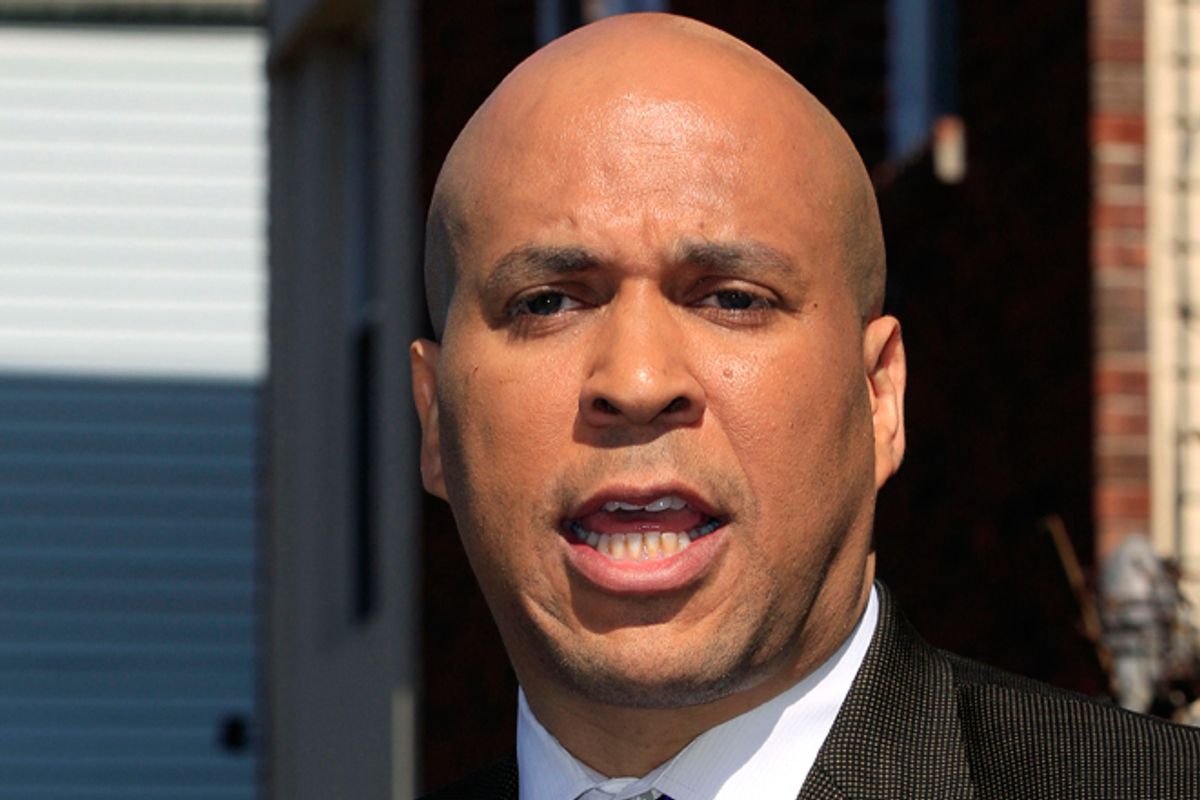 Cory Booker is a rare and unique brand of politician. Cory Booker is a human being. Since taking office in 2006, the mayor of Newark has made a name for himself for his role in lowering his city's crime rate and squeezing a cool $100 mil out of Mark Zuckerberg for the public schools. He's also, not insignificantly, one of the liveliest, most compelling public figures on Twitter. Which is where his latest escapade begins.

On Nov. 18, the mayor busted out a little Plutarch for his Twitter followers, quoting, "An imbalance between rich and poor is the oldest and most fatal ailment of all republics." Those were fighting words to some who took umbrage with the notion, prompting Booker to follow up: "We pay 4 HUGE back end govt programs: prisons, police, etc. If we invested in Schools, nutrition, etc we’d save $ & create wealth."

And though @MwadeNC, a self-proclaimed "Daughter of the American Revolution (DAR), fighting against any and all forms of socialism/communism. Army Veteran, Army Daughter, Army Wife" — a person whose Twitter wallpaper of friends consists of a lot of "WAR ON MARXIST THUGS" and "I'm the NRA" — probably didn't mean it as a challenge, she nonetheless shot back that "Nutrition is not a responsibility of the government." Booker replied, "We have a shared responsibility that kids go to school nutritionally ready 2 learn," prompting MwadeNC to say that food stamps should cover breakfast. That's when it got interesting. "Lets you and I try to live on food stamps in New Jersey (high cost of living)," he told her, "and feed a family for a week or month. U game?"

The woman, who's since protected her tweets, agreed, but it's Booker, whose journey started Tuesday morning, whom people will be watching. Though he's doing it within a livable parameter of just a week, his budget is only $30. (He's not getting it from food stamps, by the way; it's coming out of his own pocket. He's also refusing all invites where he'd be given food.) On Monday, Booker kicked off the party and posted a photo of a crumpled Pathmark receipt. Dude's going to be eating a lot of beans. Good thing he's a vegetarian.

Booker's been guided by the University of Bridgeport's SNAP Food Challenge, which invites people to eat for a week on the same budget as someone receiving food stamps, and eat only from what's purchased during the challenge. As the university explains, "This budget translates to $5 per day, or $1.66 per meal." Previous SNAP Challenge participants have included Las Vegas Mayor Carolyn Goodman, Philadelphia Mayor Michael Nutter, Phoenix Mayor Greg Stanton, Colorado Gov. John Hickenlooper and Mario Batali, who summed up the experience last spring by saying, "I’m fucking starving." These, by the way, are people who, like Booker, are knowledgeable about food and cooking and who have access to fresh, nutritious food in their supermarkets. Consider how much more of a feat it is to feed a family when you're in an economically stressed area where, as a video from Internets Celebrities revealed a few years back, your main grocery option is the snack cakes and blue-juice-laden local bodega.

New Jersey residents on food stamps receive an average of $133.26 a month. ABC News reports that a study released on Tuesday says that "almost a third of American adults went hungry or worried about someone close to them going hungry this year." So why, in a nation of so much want, would a man voluntarily go hungry?

It's not just because Cory Booker is supremely skilled social navigator, a man who knows a golden opportunity to seize a random comment and turn it into an event.  In a blog post on "A Movement Toward Food Justice," he explains, with passion, reason and eloquence, his reasons for doing this: "To raise awareness and understanding of food insecurity; reduce the stigma of SNAP participation; elevate innovative local and national food justice initiatives and food policy; and, amplify compassion for individuals and communities in need of assistance."

We stigmatize the poor. We shame them. We call them fat and lazy, equating poverty with bad choices, demanding to know how you can be hungry when you look unhealthy. We let kids go to school with empty bellies and shrug that the failure is a parental one and not a social one. Deciding to dine on a radically slashed budget doesn't eradicate hunger, but it's a call to empathy, for all of us. It's a dare to be compassionate. It's an acknowledgment that we all put our mouths where our money is, and how different that experience is when you're doing it on just $30 a week.