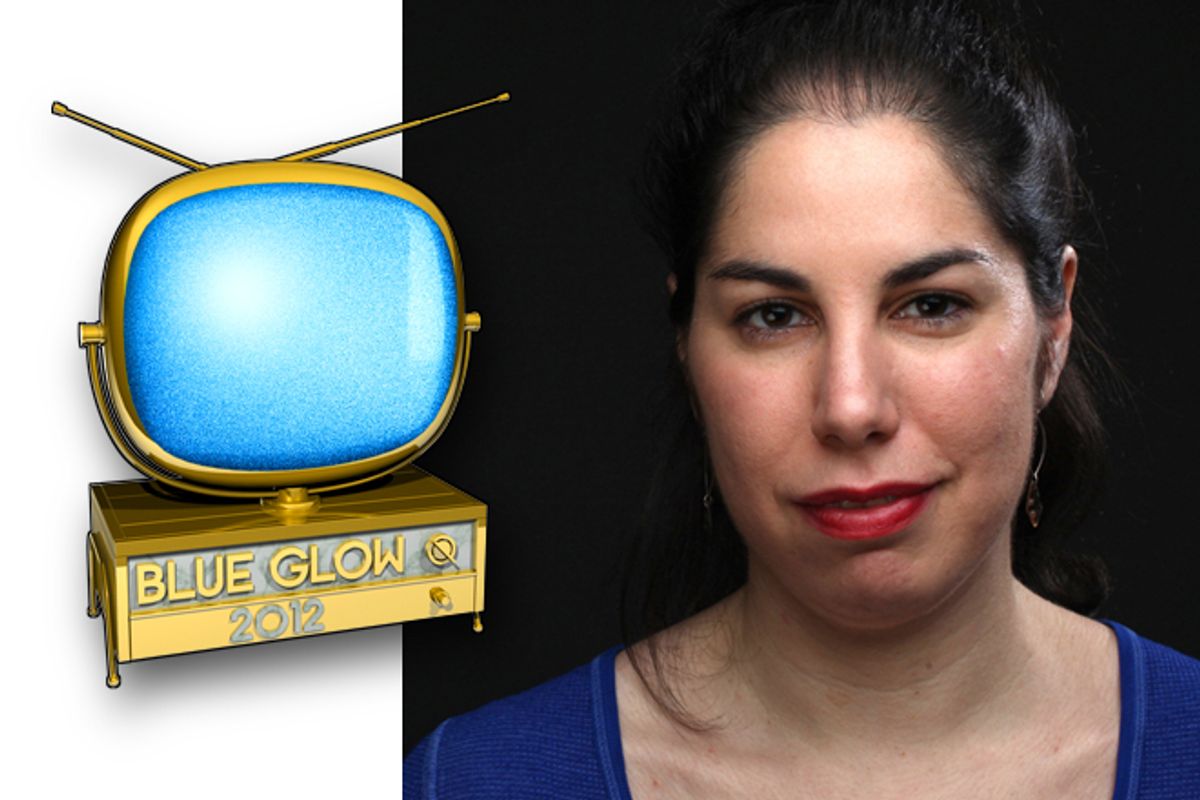 1. "Homeland" (Showtime). For the purposes of this list, I am using “best” as a synonym for “shows I most loved to watch,” which explains why “Homeland,” even with it’s deeply ferkockte final stretch, is here. Did the whole show kind of implode, selling out its realpolitik premise for a schmaltzy present? For sure. Did I always want to see next week’s episode desperately? For sure. As implausible and downright ridiculous as the last three episodes were, there was a good five-week span when “Homeland” tore through plot and expectations faster, more satisfyingly and with better acting — Claire Danes, the best of the best — than any show this year. “Homeland” couldn’t maintain its own momentum, but I wouldn’t have missed an out-of-control minute.

2. "Girls" (HBO). In the first episode of “Girls,” Hannah Horvath, stoned out of her mind, suggested she might be the “voice of her generation. Or a generation.” It was a joke — and it wasn’t a joke. Hannah Horvath, messy, overly obliging, entitled, privileged, a little too lazy, may not be the voice of much of anything, but her creator, Lena Dunham, sure is, even if she does say so herself.  Even Dunham’s haters — of which there are oh so many — see her as a sort of avatar for all the worst tendencies of millennialism. Having busted her ass to make a funny, felt, beautifully observed, wholly original series, I think she represents its best.

3. "Breaking Bad" (AMC). The amount I love “Breaking Bad” is inversely proportional to how much I hate Walter White, which speaks to “Breaking Bad’s” singularity: so good it doesn’t matter that it can make you feel bad. Watching self-justifying megalomaniac Walter White bully everyone in his life is simultaneously horrible and utterly thrilling, gutting and energizing, just like the entire series.

4. "Mad Men" (AMC). “Mad Men’s” fifth season was more amped, antic and on the nose than the four that have come before. But of any show this year — even the gorgeous “Breaking Bad” — the images from “Mad Men” are the most unforgettable to me: Megan singing “Zou Bisou Bisou” and shoving sherbet in her mouth; Joan’s face in bed with her trick; Roger and his wife, coming off acid, on the carpet, deciding to divorce; Don taking off his over-shirt like Superman to fix a leaky sink; Lane Pryce and his broken glasses. Matt Weiner has always made sure “Mad Men” worked on the visual, subliminal level — just like advertising — and this season, as always, it most certainly did.

5. "Bunheads" (ABC Family). “Bunheads” flouts nearly every “rule” of good drama. It’s set in an extremely low-stakes environment where everyone talks like a Broadway devotee on speed and goes on and on about mostly nothing much. There’s no moody antihero, just a dynamic, bantering Vegas dancer (the miraculous Sutton Foster) and her teenage charges chattering in a sleepy California town. And yet, despite breaking all the rules, and a good amount of common sense, “Bunheads” has coalesced into something funny, sweet, moving, substantial and original about the necessity and difficulty of change. And it’s the only show on TV that could have a ballet dance choreographed around the theme of recycling.

6. "30 Rock" (NBC). Watching this final season of “30 Rock,” as Tina Fey & Co. do any and every zany thing they want, has been breathtaking. This is how you drop the mic. “30 Rock” is so dense and weird and meta, it’s no wonder it has almost no mass audience anymore — but who cares? We will be watching “30 Rock” forever. Lemon out.

7. "Parenthood" (NBC). For providing a dependable weekly service to anyone who cares to watch: the cathartic cry.

8. "Louie" (FX). Louis C.K. is obviously a very funny man, but the wondrous and weird “Louie” is not exactly a comedy: Laughter is not its main concern, so much as exploring the strange, sometimes dark corners of Louis’ psyche. I was not a huge fan of the "Late Night" arc that took up the later part of this season, but the first five episodes, culminating in the devastating Parker Posey episodes, absolutely slayed me.

9. "Parks and Recreation" (NBC). The show that continues to prove sweetness doesn’t mean stupid — or unfunny.

10. "Shameless" (Showtime). Showtime’s gonzo comedic-drama about kids in Chicago raising themselves as their dad (William H. Macy, the worst, most buffoonish part of the show) drinks himself from mess to mess is not critically acclaimed, or even particularly original, but I get such a kick out of watching it in all its sometimes sexy, sometimes gross, sometimes ridiculous glory. Balancing out all the wacky are two wonderful, grounded performances from Emmy Rossum as the tough, reliable, put upon Fiona and Jeremy Allen White as the tough, angry, smartypants Lip, two of the most sympathetic, compelling characters currently on television.

1. What was the show of the year? “Homeland,” but not for purely positive reasons: A show about terrorism and America’s foreign policy and its effect on the rest of the world transformed itself into a love story. “Homeland” turned away from its most complicated, thorny and difficult ideas, to become something much simpler, a show consumed with the plot twist, with melodrama, with romance, with bad guys whose motivations are impossible to understand. As entertainment, I loved much of it, but I’ve never seen a show turn escapist so fast.

2. What was the best scene? Melissa Leo maybe date-raping Louie in the front seat of her pickup truck. Unexpected, crazy, confounding, perfectly performed, deep and deeply strange, this scene is a slurry of upended gender dynamics, swaggering self-confidence and total absurdity that’s as great to watch as it is to think about.

4. What was the funniest joke or line? For my chuckles, the funniest thing that happened on TV this year was the Fox News election night meltdown when Karl Rove personally tried to hold up Obama’s reelection, forcing Megyn Kelly to go interview Fox News' own quants, in one of most riveting live sequences in TV history. My laughter was almost all Schadenfreude, except for the part that was sheer relief.

6. And the personality of the year goes to … Stephen Colbert is a national treasure most years, but during an election year he is a beacon of undercover sanity. Seriousness has never dressed up as anyone so effectively silly.