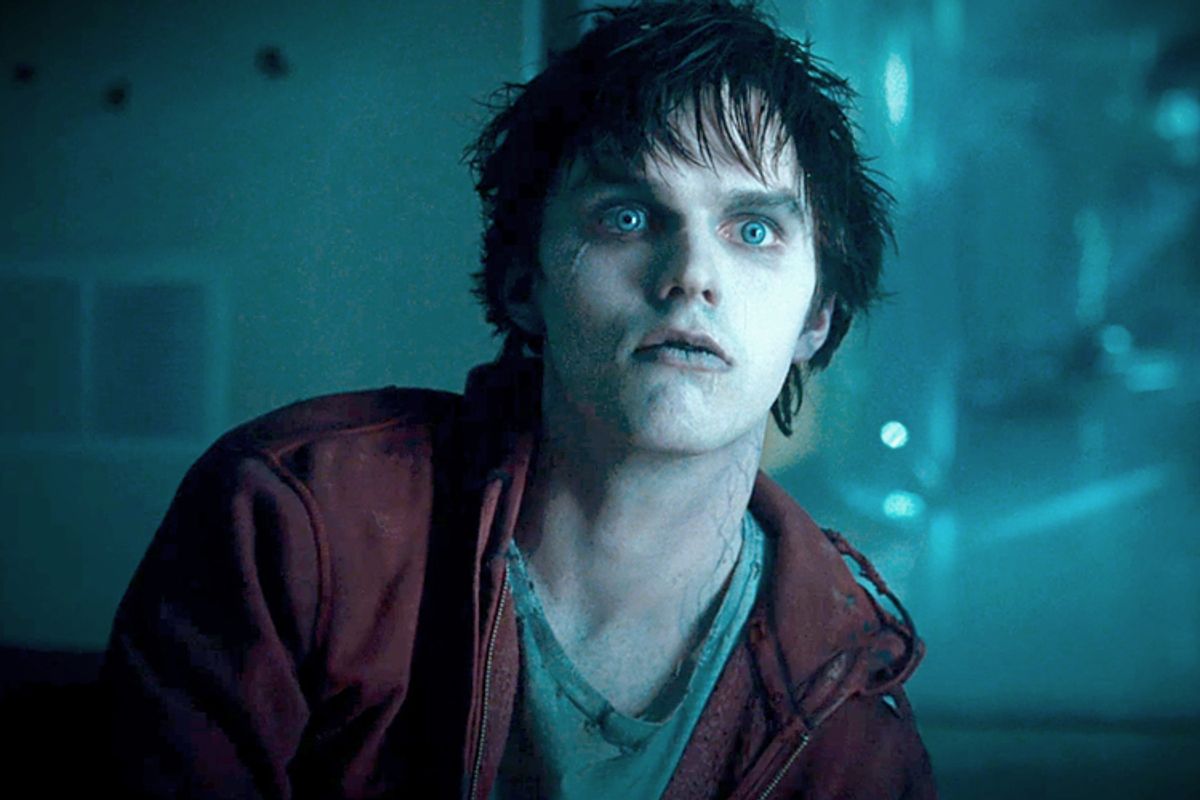 “Warm Bodies” sounds a lot better in theory than it turns out to be in practice. Of course, that’s true of about 90 percent of Hollywood movies, and let’s pause for a second to reflect that the original concept here involves a retelling of “Romeo and Juliet,” with zombies. So to say that the movie is not quite as good as its mind-blowingly moronic premise is not praise. At any rate, “Warm Bodies” is more a mild-mannered, emo-flavored romcom than a zombie movie. It has some tepid action scenes, a few swatches of genuine humor and a general spirit of cheerfulness, especially considering it depicts a future in which civilization has been destroyed. That’s more than enough to make it a hit in the dreary depths of February, and early reviews suggest that we’ve all agreed to overlook the fact that it’s essentially lazy and stupid hackwork that makes the “Twilight” movies look like a collaboration between David Lynch and Robert Bresson.

I realize that I’m being a sourpuss about a lightweight PG-13 fantasy that has committed no crimes against humanity and exists solely to give teenagers something to do on a midwinter weekend. What’s got me so pissed off is the sense that writer-director Jonathan Levine (adapting a Stephenie Meyer-endorsed bestseller by Isaac Marion) looks down on the material and fundamentally disrespects his audience. Levine is a youngish, ambitious and faintly hip filmmaker who has directed better movies than this (“50/50” and “The Wackness”), and I hope to Christ won't go on to make a worse one.

“Warm Bodies” completely fails to take either its zombie-apocalypse story or its love story seriously, and just skates by on its good-looking stars, a handful of laughs and an eclectic pop soundtrack, virtually all of it recorded before the movie’s target audience was born. (Some of it, like Bob Dylan’s “Shelter From the Storm” and Roy Orbison’s “Oh Pretty Woman,” probably predates their parents.) I totally understand that for many viewers that will be enough; maybe it’s hopelessly nerdy to insist that a movie that people spent millions of dollars to make should hang together somewhat better than a “Saturday Night Live” sketch from 1993.

So what we’ve got here is a youngish, still cute-ish zombie, who can’t remember his name but we’ll come to know as R (played by British actor Nicholas Hoult, recently seen in “X-Men: First Class” and “Clash of the Titans”). Despite a blue-gray pallor and some distended veins on his neck, R doesn’t look much worse than your typical suburban rec-room vidgame-playing Goth. And although he spends his days shuffling around the airport among a horde of other zombies -- and occasionally going on expeditions in search of human brains -- he retains his inner soulfulness and rather sweet sense of self. How do we know that? He tells us so, in endless streams of mildly self-mocking voiceover narration, just like the protagonist of every other mid-budget pseudo-indie film about a misunderstood teenager.

For one thing, this puts the cart before the horse, in narrative terms. It’s no surprise when R decides to rescue a blonde human chick named Julie (Aussie actress Teresa Palmer) from being devoured by his pals, and takes her back to his boy-cave aboard an abandoned plane to play her Joni Mitchell LPs. (You think I’m kidding, right?) Because we already know he’s basically nice beneath the undeadness. But then again, if R is so decent and anguished and clinging to remnants of humanity and all, how come he just killed R’s boyfriend and ate his brain?

I haven’t read the original novel, but throughout this adaptation Levine tries to have it both ways: R is already a good guy, who has never surrendered to pernicious zombie culture, and he is transformed by the psilocybin-like effects of eating Julie’s boyfriend’s brain and inheriting his consciousness and falling in love with her by proxy. Or something. I guess, in this universe, being a zombie is like the way right-wing Christians view being gay: It’s a lifestyle choice! Recovery is possible! All this young man needs is the right girl!

To extend the metaphor just a little further, into territory that’s really going to get me in trouble, zombie culture in “Warm Bodies” has a stratified caste system that includes a hardcore leather-boy subculture of those who have gone way over to the dark side and cannot be redeemed to heterosexuality ... sorry, sorry! I mean humanity. These are the “bonies,” zombies who have stripped off all their flesh (kinky!) and become skeletons. Skeletons with superpowers, apparently -- these include the power to see without eyeballs, vocalize without tongues or lips and run really fast. (Regular zombies, as we all know, stagger around like … well, like -- there’s no other word for it, is there?)

R mutters something early on about how the bonies are just zombies who have “given up all hope,” and, I guess, all memory of the humanity they once possessed. But the biology or theology or whatever you want to call it of “Warm Bodies” remains entirely vague, which creates insoluble narrative problems the whole way through the movie but especially towards the end -- highly unspecific spoiler alert! -- when other zombies become infected by R and Julie’s love-thang and we get a situation that seems alarmingly like the post-apocalyptic redemption imagined in the Book of Revelation: “There will be no more death or mourning or crying or pain, for the old order of things has passed away." (Is Marion a Christian, and is this resonance a conscious choice? It doesn’t much matter, but it certainly seems possible.)

I’m afraid I’ve now succeeded in making “Warm Bodies” sound weird and interesting, when mostly it’s more like dull and half-baked. There’s almost nothing in this movie that hasn’t been done better by other filmmakers, including the idea that zombies retain some shards of human identity -- see George A. Romero’s underappreciated “Day of the Dead” -- and the walled-off human city where Julie and her hardass anti-zombie dad (John Malkovich, in his recent gettin’-paid mode) and other survivors live, as seen in almost every apocalypse flick. Hoult and Palmer are plenty cute, but their scenes together are totally devoid of heat, perhaps to avoid us noticing that them getting together is basically necrophilia, which is not so much a PG-13 thing. (Feel free to explore Bruce La Bruce’s “Otto” and “L.A. Zombie” for edification. Or, on second thought, don’t.) Keep your standards really low for this one -- as in, what’s on TV is probably better but at least you’re getting out of the house -- and you’ll be OK.