Is sleep the new sex?

When we we aren't doing it, we're talking about it. But we also love to boast about how little we need 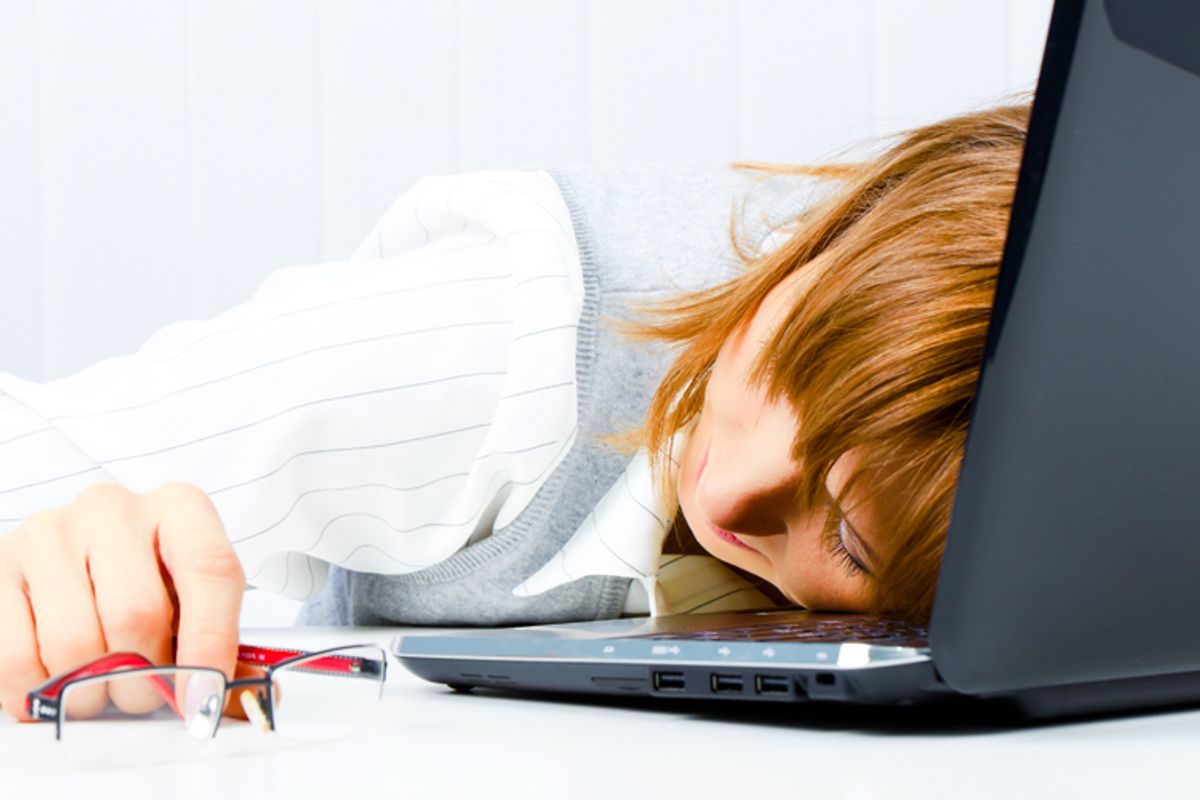 History will ultimately decide if Margaret Thatcher was the woman who ruined Britain or a feminist role model, but one thing’s undeniable -- in a world in which insomnia is a competitive sport, the Iron Lady was a sleep deprivation world champion. A BBC story Wednesday recalls the former prime minister’s  "fearsome reputation" for requiring only four hours of sleep a night. Take that, puny humans!

Whether that figure was entirely, consistently accurate is up for debate, but Thatcher is definitely remembered among those who knew her as one who, "when everyone else went off to bed, went off to work.” In that regard, she put herself in the company of Napoleon Bonaparte, who said only "a fool" needed eight hours of sleep, and Winston Churchill, who was frequently a four-hour-a-night man himself. In contrast, Thatcher’s weaksauce successor John Major "found it difficult coming after her because the civil service had got used to a prime minister who never slept, and he used to sleep eight hours a night."

For something that comes naturally, there’s endless room for debate over how to sleep correctly. As Carol Worthman, director of the Laboratory for Comparative Human Biology at Emory University, notes, hunter-gatherer societies often "sleep when they feel like it — during the day, in the evening, in the dead of night." Meanwhile, the siesta -- the delightful practice of taking a little midday snooze -- exists in cultures all over the world.

Our modern, Western relationship with sleep is far more complicated and conflicted. Physiology researcher Kenneth Wright told NPR last month that "Sleep has to be a priority," and priority it is, at least conversationally. Our Facebook and Twitter feeds are almost as crammed with sleep updates as they are with pictures of dinner. Who’s awake but exhausted this morning? Who’s in need of caffeine? Who’s putting in a late night and will regret it later? Who’s awake in the dead of night? One-third of Americans say they’re getting six hours a night or fewer. And while sleep isn’t quite the new sex, its pursuit and satisfactions are frequently remarked upon and bragged over in much the same way. And when doing it eludes us, we talk about it instead. Yet the difference between sleep and sex is that we simultaneously urgently long for it and love to show off how little of it we need.

Sleep is surrender; it’s for the weak. No wonder so many famous people take the Thatcherite route of seeming to never do it. Martha Stewart has humble bragged, "It's an exhausting lifestyle, and I always say sleep can go. It's not important to me right now." Designer Tom Ford says he sleeps only three hours a night.  Donald Trump claims a similar schedule, saying, "How does somebody that's sleeping 12 and 14 hours a day compete with someone that's sleeping three or four?"

Sleep is glorious; it’s exactly what we need.  On Tuesday, the New York Post ran a splashy feature on the expensive lengths to which some people will go for a good night’s sleep -- including a mother of triplets who hired a $300 a night nurse for 12 weeks solid just so she could get some rest, and the Williamsburg musician who shelled out 10 grand for soundproofing in his apartment. Coming to SoHo this summer: a Sleep Studio shop full of expensive scented candles and  sheets and teas, because "The brand understands that sleep and dreaming are fundamental, intimate and personal." And why not a luxury item, while we’re at it?

Sleep aids are among the most commonly prescribed drugs in the U.S. -- with upward of 60 million prescriptions a year, despite warnings about their safety. Americans are also, funnily enough, the biggest consumers of coffee on earth. We point to sleep deprivation as a cause of weight gain. We argue that the eight-hour, uninterrupted snooze is an artificial, unnecessary construct, and we study the link between sleep and emotional well-being. And a PsychCentral story this week pointed to sleep loss as a cause of everything from higher stress to impaired memory to poor socialization.

In a world that never shuts down, where something interesting is always going on and somewhere, an email is always waiting to be answered, we fetishize our sleep, in a love-hate I-crave-you-I-don’t-need-you bad romance. We fight it; we pursue it, like children going down for a nap but not without a struggle. Yet ultimately, the sandman always wins. When the news broke that Margaret Thatcher had died, the press was quick to note that the end had come peacefully. And that she had been in bed at the time.