Pick of the week: I was a teenage anarchist!

Pick of the week: Olivier Assayas' gorgeous "Something in the Air" explores the crumbling, crazy '70s Euro-left 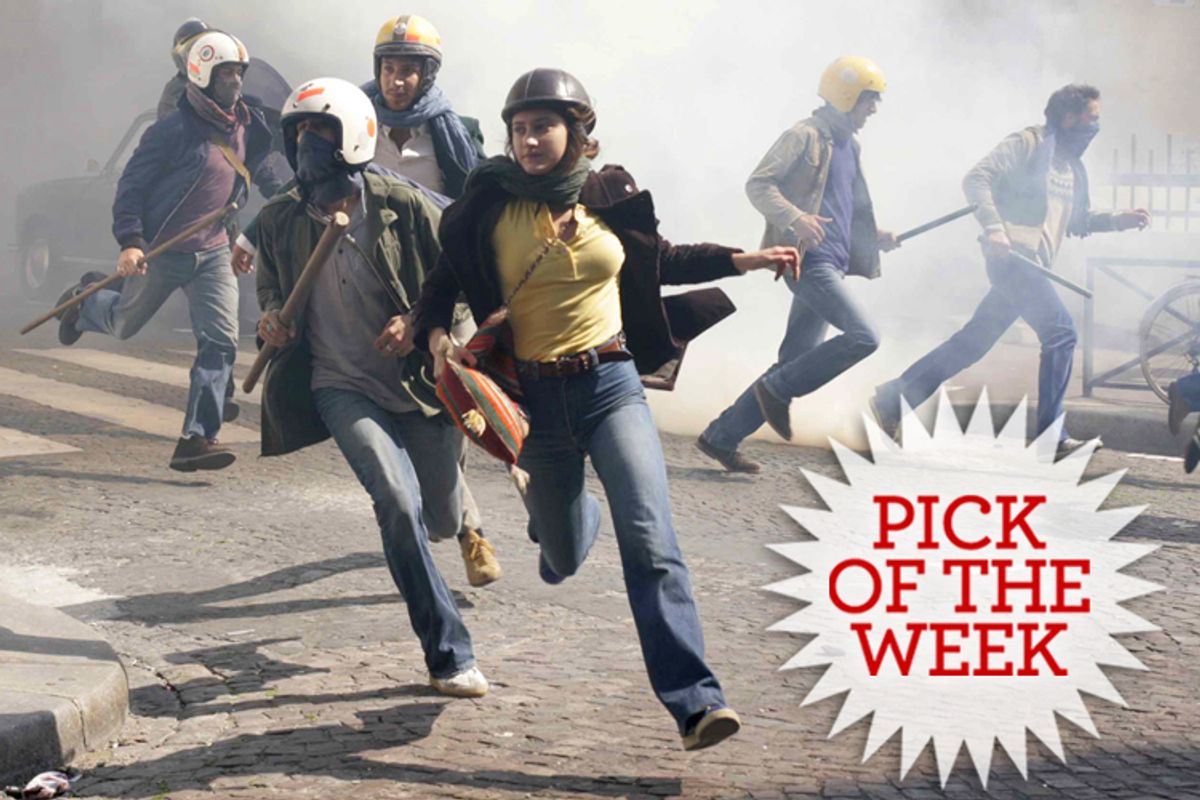 “Something in the Air” tells the story of a French teenager caught up in the half-crazy early-‘70s climate of political radicalism and artistic experimentation, an era that can seem so far from our own as to be a science-fiction alternate reality. It’s a terrific film, wonderfully atmospheric and alive, but also a curiously appropriate one to encounter right now, as we deal with the aftermath of a cruel and pointless crime apparently committed in the name of some abstract revolutionary ideal. Writer-director Olivier Assayas (of “Summer Hours” and the terrific terrorist miniseries “Carlos”), one of the leading figures in French cinema, has described this movie as generally autobiographical. While Assayas’ young protagonist and his anarchist pals never come to the point of blowing up civilians, they get pretty close, and indeed avoid committing murder mostly through luck. Is this a true story? I obviously have no idea, but it’s a convincing and disturbing one.

I’m officially splitting this week’s Pick of the Week between “Something in the Air” and David Chase’s drastically underappreciated ‘60s rock ’n’ roll movie “Not Fade Away,” which is just out on home video. They’re strikingly similar stories in different settings and different registers, about young men coming of age in the wake of a revolution that turns out to be somewhat less than advertised. Both directors are complete fanatics on the subject of pop music; I’d love to hear the conversation where they get together to discuss their favorite albums, except that it might devolve into bitter disputes about garage rock and psychedelic folk. Early in “Something in the Air,” Assayas’ stand-in, the mop-top wannabe artist and filmmaker Gilles (Clément Métayer), goes through his record collection, skipping over a bunch of better known albums by the likes of Jimi Hendrix, Led Zeppelin and Jethro Tull before picking one by Syd Barrett. That sums it all up right there.

Chase’s suburban bandmates in “Not Fade Away” are more interested in emulating Mick and Keith than in revolutionary politics, although they hold all the requisite opinions about the Vietnam War, the civil rights movement and the general bankruptcy of American imperialism. Between Kent State, the Black Panthers, the political assassinations and the Weather Underground, there was plenty of political chaos in America during those years – much more than people nowadays generally choose to remember. But there was nothing in our country that can compare with May 1968 in France, when students occupied most major universities and two-thirds of the country’s workforce went on strike, in defiance of both the government and the unions. It was the high-water mark of anti-capitalist sloganeering ("In a society that has abolished every kind of adventure, the only adventure that remains is to abolish the society") and as close as any major Western nation ever got to a popular revolution during the Cold War years. More than two generations later, the event still casts a long shadow across French history and society.

Assayas’ French title is “Après mai” or “After May,” which requires no explanation for French viewers but would seem cryptic to most foreigners. (Very likely he personally selected the English title, but: Meh. Doesn’t it suggest a sunny but mediocre Hollywood romance, a lesser landmark in the career of Reese Witherspoon?) At any rate, we’re about three years after May ’68 when “Something in the Air” begins – Assayas himself was only 13 at the time of the great uprising – and while the worker-student left is still convinced that a revolution is brewing, the Gaullist state has regained majority approval and is cracking down on dissent. Gilles and his suburban high school pals belong to an "anarchist tendency" -- Assayas was heavily influenced by cantankerous Situationist philosopher Guy Debord, and has never been sympathetic to any version of Marxism -- and take part in violent street clashes with the notorious Special Brigades of the Paris police. But even they seem dimly aware that they’re imitating the passion of the recent past, clinging to an inherited dream that’s already started to turn sour.

Perhaps the greatest parallel between “Something in the Air” and “Not Fade Away” lies in the fact that both Assayas and Chase view the artistic, romantic and philosophical struggles of their fictionalized younger selves with what you might call affectionate dispassion. Gilles is ambitious and talented, but also feels disconnected from his surroundings and driven at least as much by fear as by passion. (Both movies, if you like, belong to the tradition of Joyce’s “Portrait of the Artist as a Young Man.”) Like countless young men before and after him, Gilles drives away girlfriends who love him with his profound uncertainty and irresolution: First there’s the aesthete girlfriend, Laure (Carole Combes), who moves on to London, hard drugs and older guys, and then there’s the committed revolutionary Christine (dark-haired, sharp-angled beauty Lola Créton, of Mia Hansen-Løve’s “Goodbye First Love”), who moves on to agitprop filmmaking, an Italian commune – and older guys.

“Something in the Air” doesn’t so much tell a story as ride a powerful and convincing vibe from scene to scene. Whether Gilles and his friends are attending a drugged-out backyard bonfire in the affluent suburbs, watching a propaganda film about the Laotian revolution in an Italian piazza or battling right-wing security guards while they graffiti-bomb their own high school, Assayas and cinematographer Eric Gautier capture both the sense of tremendous urgency – that feeling that what’s happening right now is immensely important – and also the wistful, lost sensation of having just missed something. Gilles tells one of his girlfriends that he’s afraid he’ll watch his own youth go by instead of participating in it, and while that may be the middle-aged Assayas talking to us across years of ironic distance, it’s also an emotion familiar to anyone with a reflective temperament.

Many people who didn’t see Assayas’ “Carlos” assumed that it was some leftist hagiography of the legendary ‘70s terrorist, and in that vein many people may assume that Gilles’ youthful anarchist misadventures are painted in a rosy, romantic light. But this is a work by one of the subtlest and most intelligent artists at work in world cinema, and in between the psychedelic-rock grooves he paints a hard-edged portrait of how easy it is for idealism to harden into ideology, and for victimless vandalism to turn to nihilistic violence. As the Parisian left crumbles into factional infighting between Trotskyists, Maoists and anarchists, Gilles and his friends brush past dark, Tsarnaev-like possibilities -- and do not necessarily emerge innocent or unscathed. Some European young people, like the Baader-Meinhof group in Germany or the Red Brigades in Italy, went a lot further down that path. Maybe Gilles’ artistic irresolution saved him in the end. Girlfriends may have given up on him in disgust, but at least he grew up to ask the big, haunting, not quite answerable questions about what it all meant.

"Something in the Air" opens this week in New York and Los Angeles, with more cities to follow. It will be available on demand nationwide beginning May 9, from cable, satellite and online providers.