Tornado survivor to Wolf Blitzer: Sorry, I'm an atheist. I don't have to thank the Lord

Wolf Blitzer pushes a tornado survivor to praise the Lord. She tells him she's an atheist, with dignity and respect 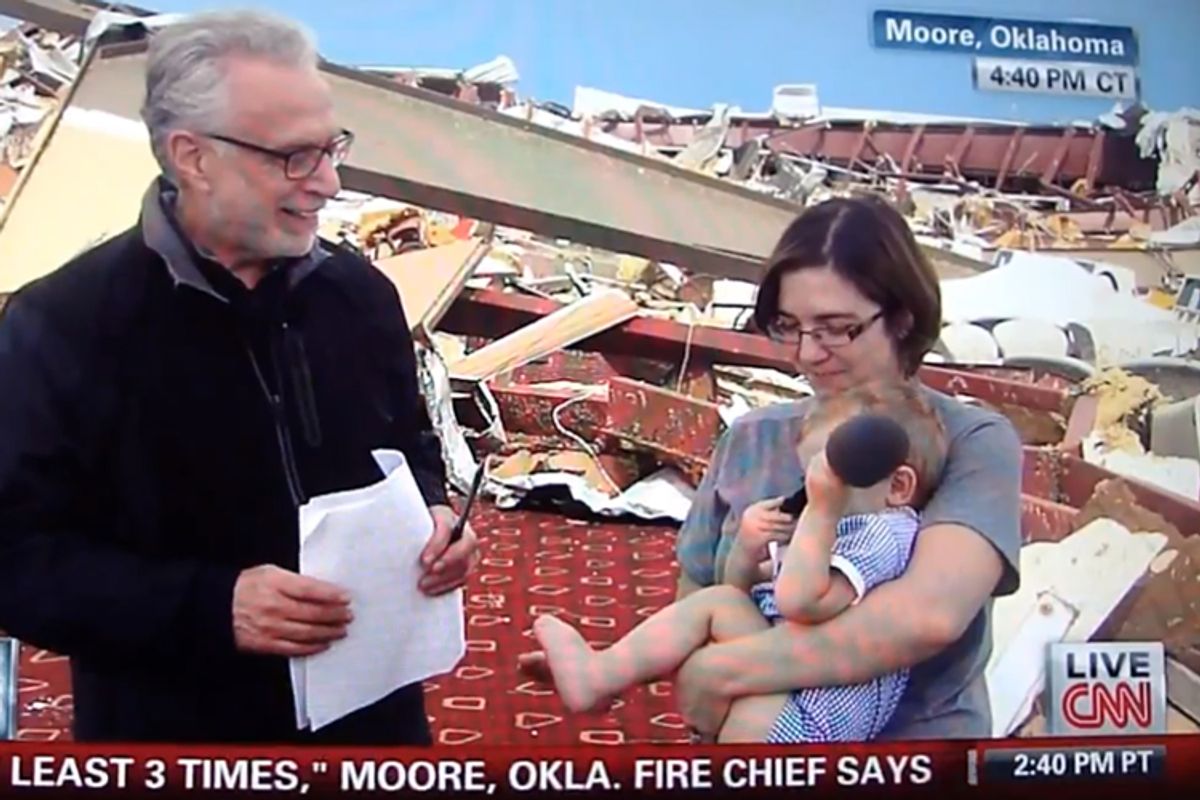 You'd think by now CNN would have learned to stop treating its assumptions as truths. But when Wolf Blitzer made a casual comment Tuesday, it turned out to be a teachable moment both for the newsman and television viewers.

Speaking live to a survivor of the deadly tornado in Moore, Okla., Blitzer declared the woman "blessed," her husband "blessed," and her son "blessed." He then asked, "You've gotta thank the Lord, right? Do you thank the Lord for that split-second decision?"

But as she held her 18-month-old son, Rebecca Vitsmun politely replied, "I'm actually an atheist." A flummoxed Blitzer quickly lobbed back, "You are. All right. But you made the right call," and Vitsmun graciously offered him a lifeline. "We are here," she said, "and I don't blame anyone for thanking the Lord." Nicely done, Rebecca Vitsmun.

One in five American adults – and a third of Americans under age 30 -- now declare no religious affiliation. We are less religious now than at any other point in our history, and our secularism is rising at a rapid pace. Get used to it, Lord thankers.

As Vitsmun pointed out, there's nothing necessarily wrong with a statement of gratitude or even an acknowledgment of spirituality. I recently had someone tell me that she felt very "blessed" – right before adding that she was agnostic. Where Blitzer was insensitive -- and just plain unthinking -- was in his no-doubt well-intentioned demand that his interviewee cough up a Praise the Lord moment for the edification of CNN viewers.

And Blitzer was not the only person this week who got his expectations rocked. When Tempe, Ariz., state Rep. Juan Mendez was asked Tuesday to deliver the opening prayer for the afternoon's session of the House of Representatives, he delivered something different.

"Most prayers in this room begin with a request to bow your heads," the Democratic official said. "I would like to ask that you not bow your heads. I would like to ask that you take a moment to look around the room at all of the men and women here, in this moment, sharing together this extraordinary experience of being alive and of dedicating ourselves to working toward improving the lives of the people in our state."

He went on to say, "This is a room in which there are many challenging debates, many moments of tension, of ideological division, of frustration. But this is also a room where, as my secular humanist tradition stresses, by the very fact of being human, we have much more in common than we have differences."

It was a call to love and empathy that stands right up there next to any prayer in the book, and one that offered bonus inclusion and humanity. Afterward, he said, "I hope today marks the beginning of a new era in which Arizona's non-believers can feel as welcome and valued here as believers." And if the conservative state of Arizona can make it happen, there's hope yet for the other 49, people.

In a nation in which the divide between believers and non-believers can be great and truly ugly – one of "militant atheism" on one side and unbearably ignorant religious conservatism on the other -- with just a few words, Rebecca Vitsmun and Juan Mendez showed that the ideals of being respectful and compassionate belong to all of us. Whatever our personal views, we can give others space to have theirs and to express them with dignity. We can challenge assumptions, but we can conduct ourselves with kindness. Because what matters most in life isn't what we believe in our hearts, it's how we practice those beliefs with each other.