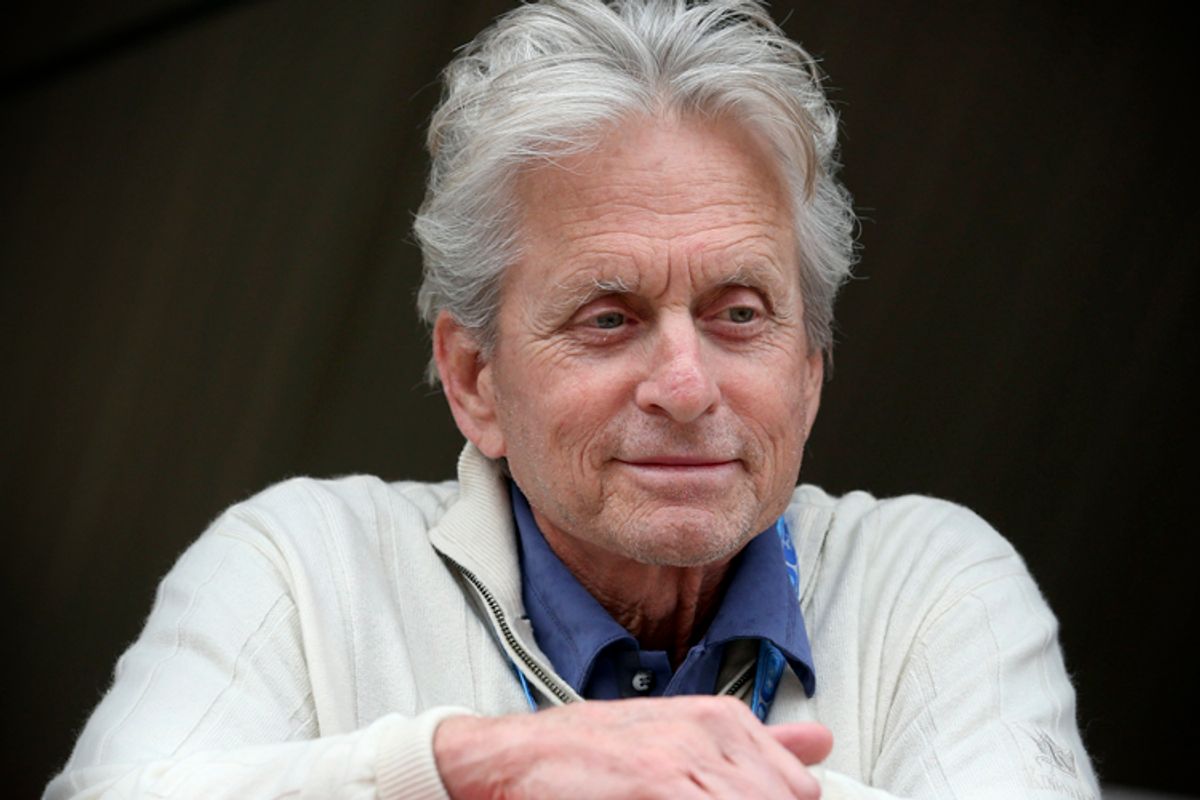 If this is the start of a worldwide oral sex shortage, blame Gordon Gekko. In an eyebrow-raising Sunday interview with the Guardian, 68-year-old Oscar winner Michael Douglas has opened about his recent bout of cancer – and what he says caused it.

"Stage 4 cancer and a shit-pot of chemo and radiation," he admitted, "that's a rough ride. That can really take it out of you. Plus, the amount of chemo I was getting, it zaps all the good stuff too. It made me very weak."

Incredible as Douglas' words may seem to cunnilingus enthusiasts, he's got science to back up his claim. An April study in the American Journal of Gastroenterology "detected HPV in about 66 percent of those with oesophageal cancer." As the National Cancer Institute points out, "more than half of the cancers diagnosed in the oropharynx are linked to HPV-16," a particular strain of the virus. It does not, however, offer any advice on curing it via a little trip downtown – chemo and radiation are probably still a safer bet in that department. As Sydney University's Faculty of Dentistry professor Mark Schifter told the Sydney Morning Herald Monday, "It would be very hard to get a randomized, controlled study to prove that" oral sex cures cancer.

You'd probably get a lot of volunteers for the trial, though.

Douglas' openness could be interpreted in certain circles as a useful bit of awareness-raising; after all, the cancer risks of HPV to men are rarely discussed. It's an important factor to consider in our ongoing conversations about the HPV vaccine and its long-term public health implications for both men and women – less HPV leads to better consequences for everybody. It certainly gives weight to the case for HPV vaccination for boys as well as girls, a movement that has been far too slow to get off the ground -- because HPV is still largely viewed as a lady virus.

But HPV is not just -- as the makers of Gardasil itself discreetly suggest -- about "vaginal cancer and vulvar cancer." Or, as Martha Plimpton tweeted Monday, "Just so we're clear here: it's HUMAN Papilloma Virus. Not LADIES Papilloma Virus." And Douglas' admission certainly suggests we need to be far more forthright in how we talk about oral cancers and their causes.

However, statistics don't tell the entire story. It's not shocking that the HPV virus is found in such a high percentage of individuals with cancer. The Centers for Disease Control notes that "Approximately 79 million Americans are currently infected with HPV. About 14 million people become newly infected each year." And here's the kicker: "HPV is so common that nearly all sexually active men and women will get at least one type of HPV at some point in their lives." Like the vast majority of people who've had sex, I too have had HPV. But I'm not yet ready to send out a SORRY FOR THE CANCER email to all my previous partners. The CDC points out that "Other factors, notably tobacco and alcohol use, may also play a role with HPV to cause these cancers."

That's why it's hard not to detect more than a touch of braggadocio in Douglas' frankness. He didn't get cancer from his well-documented years of smoking and drinking, oh no! He got it from servicing the ladies. And coming so soon after his turn as the closeted Liberace, one can't help wondering if the admission is an attempt to assure his public that he is not in fact behind the candelabra but instead firmly ensconced down on the carpet.

And it's fascinating that when we talk about HPV and women, it's all too easy to turn the conversation into a public shame session. Two years ago, author Ayelet Waldman famously admitted that she'd had HPV – because, she said, her lawfully wedded husband got it from his first wife. For women, there's the urge to assure, as Waldman did, "Got it in a monogamous marriage." For men like Douglas, the virus seems more like a confirmation of heterosexuality -- and a reminder that he has kneeled at the altar of a woman who's been on the cover of Maxim.

But what's truly most astonishing about the whole Douglas admission isn't the sexual boasting -- it's that he found himself in a position to do it in the first place. You know what people who've had Stage 4 cancer shouldn't have to account for? How they got their cancer. They shouldn't be expected to turn their illness into an exercise in rationalization – I'm not a loser who got cancer from smoking; I'm a bad-ass who got it from servicing Catherine Zeta-Jones!

The implication, that far too many of us who've had cancer have firsthand experience with, is that there's a hierarchy of our disease -- that some people deserve it, and that the person with the cancer owes the world an explanation for How This Happened, so that others can go about their lives feeling blameless and pure. So yeah, ultimately, the Douglas interview was pretty gross. But it wasn't the answer that made it so. It was the question.