The sad decline of Komen for the Cure

More events canceled -- so can we get back to fighting cancer now? 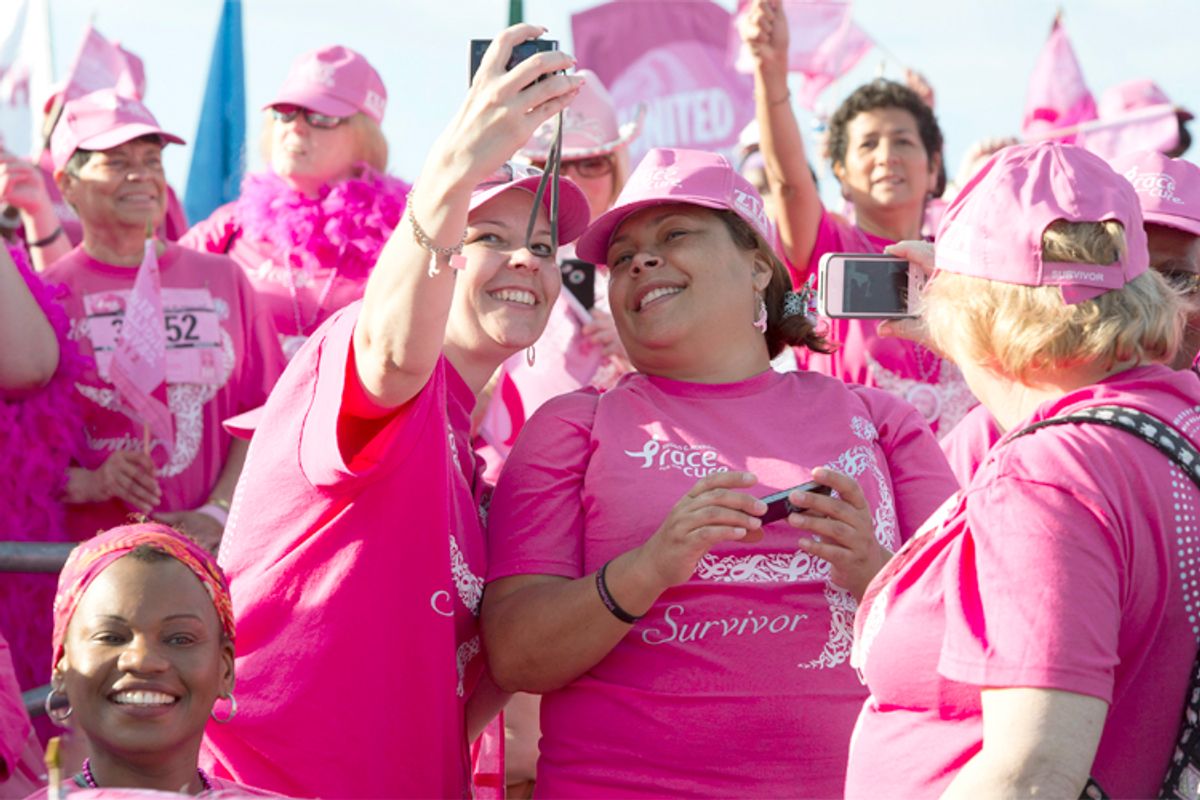 The streets will be a little less pink next year. One of the world's most prominent breast cancer organizations, Susan G. Komen for the Cure, announced this week it's canceling its annual "3-Day" fundraising event --  a "60-mile walk for women and men who want to make a personal difference in the fight against breast cancer" in seven locations for 2014. It will not be returning to Arizona, Boston, Chicago, Cleveland, Tampa Bay, San Francisco or Washington, D.C.

The cancellations are just the latest setback for the troubled organization. In recent years, it's come under heavy fire for its aggressive, downright promiscuous alliances with dubious corporations looking to coat themselves in a virtuous sheen of do-good pink. Kentucky Fried Chicken? Sure. Whatever. Komen's also been chastised for pouring its considerable financial resources into attacking other organizations that dare to use the contentious, wildly ambiguous phrase "the cure." But its woes have ramped up considerably in the past 18 months, ever since it fumbled spectacularly in its attempt to cut off its funding for breast cancer screenings and services provided by Planned Parenthood. What followed was an epic social media failure, a quick retreat from its proposed course of action and the resignation of its politically conservative senior vice president  Karen Handel. Then, for a particularly galling coup de grâce, last month it was revealed that the organization had given its robotic founder and CEO Nancy Brinker a mighty generous 64 percent raise, increasing her 2012 salary to an extravagant $684,717 -- all while consistently investing smaller and smaller percentages of its donations in research for its famed "cure." In 2011, it spent a paltry 15 percent of its donations on cancer research.

Shocker -- now fewer volunteers are interested in donning their pink T-shirts, lacing up their sneakers, and devoting their time, energy and stamina to a charity that seems increasingly out of touch.

There's no satisfaction to be found in the disappointment of people affected by breast cancer, a series of diseases that will affect one in eight women in their lifetimes. On Komen's 3-Day event Facebook page, commenters have been saying they feel "abandoned" by decreasing support and expressing their "disappointment" that Komen has pulled the plug in so many cities. Yet others have been voicing their disillusionment with Komen itself, with comments like, "I can not justify donating any more money to this foundation."

The event -- with its high fundraising requirement of "at least $2,300 to participate" and its promise to participants of "a dining tent, hot showers, pink sleeping tents, evening entertainment and various other activities" -- will still go on this year and in several cities next year. But the shift is an opportunity not just for Komen to seriously rethink its strategies and how it best services those affected by breast cancer, but also for its supporters to consider how best to genuinely serve the cause. I say this as someone who last year trained for and ran a marathon for a cancer charity -- there are plenty of positive, wonderful things that come out of big, fun events like big runs and walks. But it's a means, not an end. The ultimate goal is not a pink tent or a finish line and feeling good about yourself when you get there. That's just a nice benefit. Nor does canceling an event in any way, shape or form disempower anybody from raising money for a cause that is truly worthy.   There's so much more to fighting a devastating disease and helping the people living with it than the pleasant, but highly symbolic, act that fundraising events so often are. Walking is great. But walking was never going to cure cancer anyway. Maybe it's time Komen remembered that.