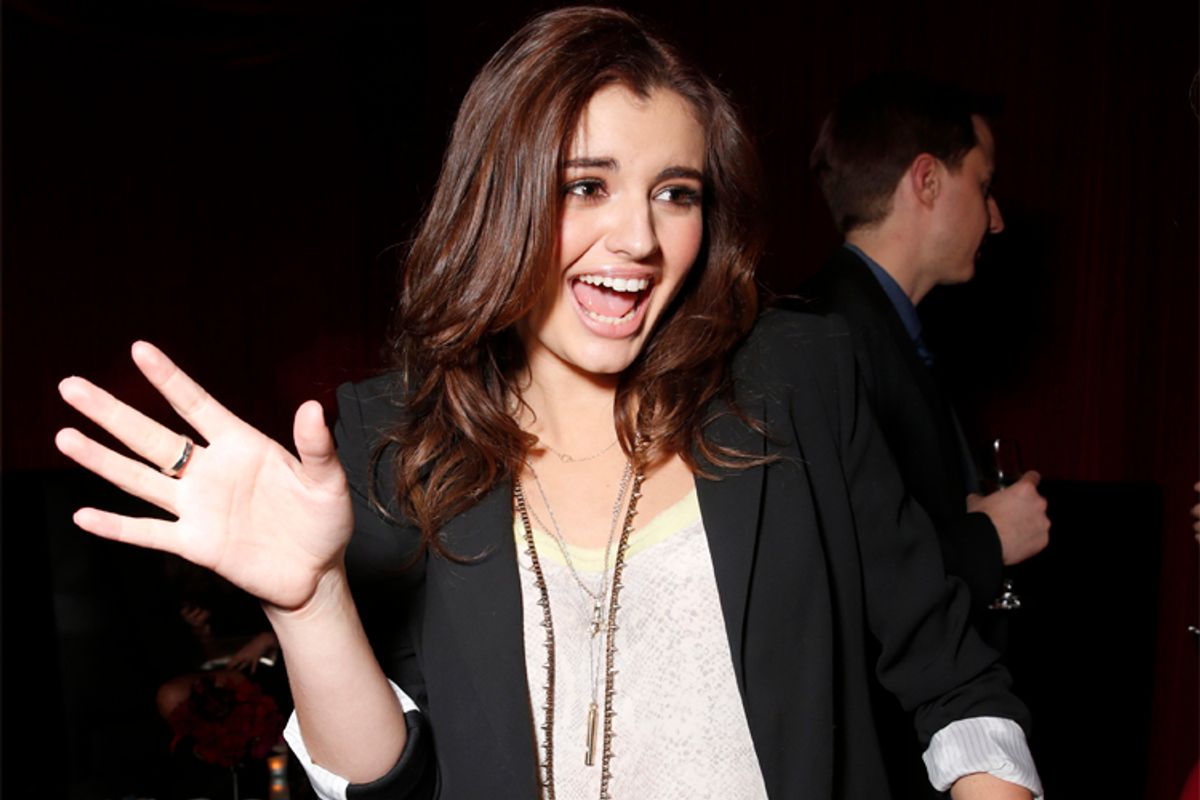 Internet fame is both fleeting and forever. Our viral stars remain somehow fixed in the moment we found them, endlessly dancing up the wedding aisle, falling off buckets of grapes, warning viewers to hide your wife, hide your kids. And so, for most of us, the dead-eyed girl behind the "worst music video ever" will be eternally stuck on Friday, Friday, getting down on Friday. But Rebecca Black, who turns 16 later this month, has grown up considerably in the two years since she unleashed her hauntingly tuneless homage to a certain day of the week. In short, she doesn't quite suck now.

Let's just be clear -- Rebecca Black has not become Adele. She would surely still never make it to Hollywood Week on "Idol" -- though she has dared to belt out Kelly Clarkson on "The X Factor." Nor is she as exhaustingly, intentionally funny as PSY. But when I first heard my daughters urinonically listening to a song of hers recently, I assumed it was by some pretty new Disney/Nick star and not, in fact, the most notorious artist to ever come out of the reliably horrendous vanity label Ark Music Factory. She will never be Pink, but seriously, tell me she's any worse now than Bridget Mendler. At her current rate of improvement, she's roughly a notch below Ariana Grande.

Black, who began homeschooling two years ago in part because of the bullying she received in the wake of her peculiar celebrity, is an unusual young performer. Unlike, say, Star Wars Kid, she didn't become famous inadvertently. She wanted to be known for her singing. She wanted people to see her video. That's why her family shelled out a few grand to make the thing for her in the first place. What she couldn't have predicted or controlled was the mockery and wrath she'd inspire – the wild deluge not of mere, "Wow, this is pretty terrible" but those pure, undistilled "Go kill yourself" messages that YouTube commenters are so famed for. Directed at a then 13-year old girl.

She has had, ever since, a choice. Skulk back into mortified obscurity, or leverage her singularly strange fame into something of a serious music career? Keep going, even after setting the bar for awfulness? Rebecca Black chose the latter. Rebecca Black will not go quietly into footnote status, like some mere Charlie Bit My Finger.

It's helped her considerably that she's been championed by some friends in high places. Katy Perry showcased her in her own video for "Last Friday Night (TGIF)" and covered "Friday" on her tour.  "Glee" did its own inevitable party version. Meanwhile, Black's subsequent songs and videos have shown her faltering yet steady progress. Sure, her "Suck it, haters" follow-up to "Friday," called "My Moment," lacked a certain Kanye intensity. And the droning, nonsensical "Person of Interest" may actually be even worse than "Friday." But 2012's "Sing It" shows a hint of promising effort, and "In Your Words" has flashes of maturity. And with each video, she's grown more confident and loose in front of the camera, all while retaining a puppyish, unguarded quality that's endearing in a world of flawlessly dull Victoria Justices. In April, she released a video duet of Rihanna's "Stay" that lacked the original's lush ache, but was certifiably competent. Even YouTube commenters have been enthusing that she's "pretty good" now.

Had Black not been so spectacularly and publicly bad, right out of the gate, she might have spent her teen years finding her (non auto-tuned) voice, developing a following. Instead she got fame and infamy in equal store. And somewhere along the way, in the hearts of a devoted audience of middle schoolers, her "Friday" became a bona fide thing -- a reminder of a particular springtime, a day at the mall, that time at Pinkberry, whatevs. Girls started to genuinely enjoy Black, the way that generations before have found themselves inexorably tied to a singer, a song, that provided the soundtrack to a moment in their lives. Over 50 million YouTube hits will do that for a singer. As my younger daughter says, "At first I liked her because she was hilarious. Now I just like her." And for one generation, she may yet prove a reminder that however awkward and awful you are at 13, life eventually gets better.