My kid has terrible taste

When he sings Carly Rae Jepsen, I know the other parents are judging me 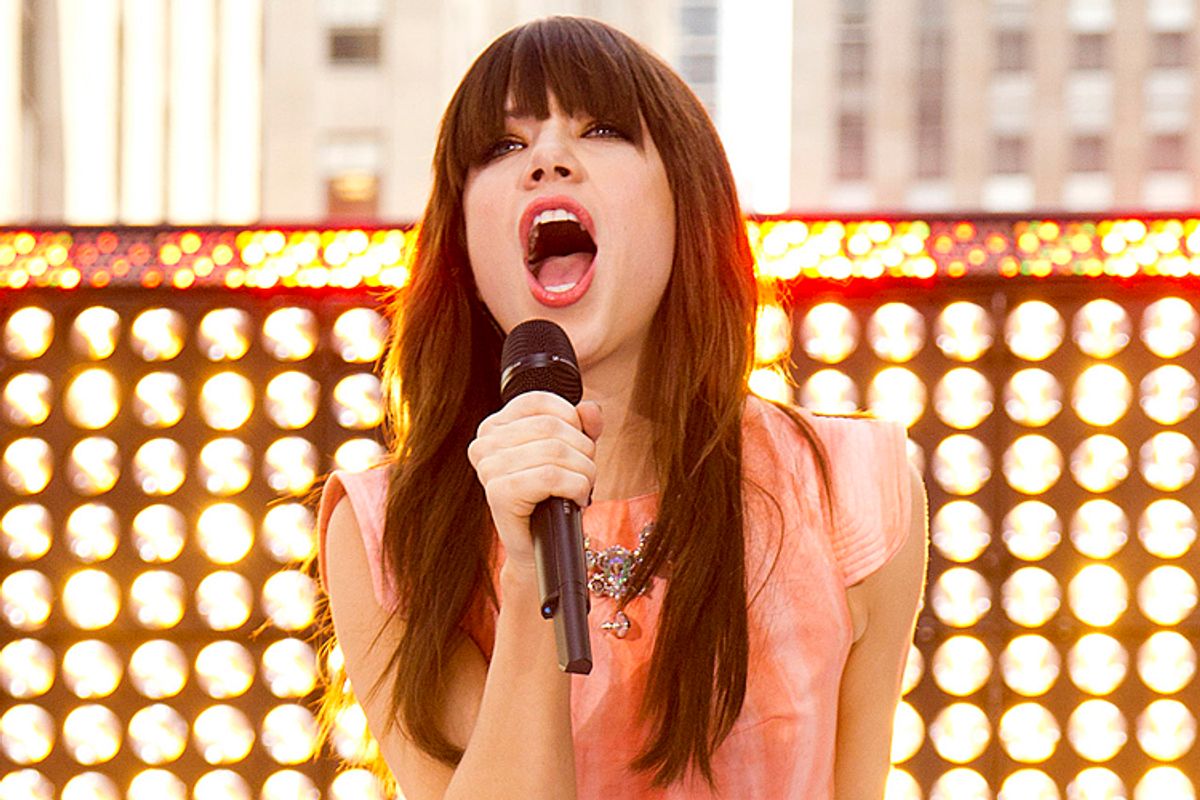 My four-year-old is sexy. And he knows it.

It's not like he's bragging -- he's just reciting the lyrics to one of his favorite songs, LMFAO's “I'm Sexy and I Know It,” from their seminal 2011 album “Sorry for Party Rocking.” Other pleasures from that collection include “Party Rockers in the House Tonight,” which doesn't sound too awful coming from a four year-old's mouth until he arrives at the part where he sing/mumbles, “be the first girl to make me throw this cash.” And then there's Psy's “Gangnam Style,” a Korean paean to sexy ladies, and Owl City's “It's Always a Good Time,” and Macklemore and Ryan Lewis's “Thrift Shop.” This one, as you probably know, is a song about buying clothes at Goodwill -- a total pro-family activity -- but unfortunately either Macklemore or Lewis introduces the topic by discussing the size of his cock (“big”).

The problem here is twofold. First, it seems a given that having your preschooler sing about sexy ladies and big cocks is distasteful. Second, every time he sings one of these songs in public, I know what all the other parents are thinking: Jesus, Lauren, your kid has really bad taste.

What can I say? It's true. He has terrible taste. There are lots of profane songs he could sing that would show off what a selective little hipster I'm raising, but these are not the songs he prefers. He could indulge in some early Liz Phair, for instance, as these songs are pleasingly X-rated but also insightful reclamations of feminist power. He won't have it. And as for the whole roster of profane hip hop, from vintage Slick Rick to that new Kanye West record, it's a nonstarter.

He prefers Foster the People. He prefers Carly Rae Jepsen. He even prefers a band I know you've never heard of, Hot Chelle Rae, whose song “Tonight, Tonight” is at least pretty clean, although it does include one baffling reference to Zach Galifinakis.

I know there are child-friendly versions of some of these songs -- I've been apprised of “Kidz Bop,” CDs that feature saccharine versions of pop songs. But my son has no time for this nonsense; give him Psy or give him silence. And the world chooses not to give him silence, for these songs are everywhere: on other people's radios, at ballgames, at preschool gym class, in the park. And often -- all too often -- in our house.

Now before I go any further, I should say that my husband, the kid's father, has superb musical taste. When he's home, we live in a concert hall of '50s jazz, '70s dub, and '90s weirdo indie rock. Ben is a musician, too and our basement is full of keyboards and drums, and he and the kid can spend hours down there making noise that sounds a whole lot like music. He's teaching our son to recognize the different instruments in the different songs he hears; my kid not only likes “Party Rockers,” but he can also detect the autotune.

And one day, I know, my kid will have excellent taste, just like his daddy's. Already he shows dangerous signs of enjoying the Mountain Goats, and the other day I caught him and Ben listening to Lee Scratch Perry while eating their peanut butter and jellies. They were nodding along happily in a universe of their own.

But the kid gets his bad taste from somewhere, and -- okay, look, it's not from his dad.

Sure, I have some old Liz Phair, a few NWA deep cuts, but when I really want to feel the music, I turn to something horrendous like Kenny Rogers' “Don't Fall in Love with a Dreamer” or  Aerosmith's “Angel,” or that  '70s song where he's not talking about movin' in, and he doesn't want to change your life.

I come by own terrible taste as honestly as my son comes by his. My father was the only person to ever purchase John Tesh's “Sax by the Fire” unironically. Long car drives to visit my grandparents in western Pennsylvania were made more horrific by the wails of the Three Tenors. Truly, one hasn't known despair until one has suffered through Luciano Pavarotti's version of “Moon River,” while stuck in the middle of the backseat on an unmoving stretch of the Pennsylvania Turnpike. It was sweet relief when even my father had had enough and turned, for variety's sake, to Phil Collins' “No Jacket Required.”

At some point in my childhood it became clear that I either had to give in or lose my mind. So I learned to love horrible music, just as, I'm certain, my father learned to love it from his own parents, and they from theirs, and onwards back into the generations. I can imagine my forebears hiding from the Cossacks in some hut in Lithuania with nothing but a threadbare blanket and an Al Jolson tune to keep them warm.

I expect, however, that soon enough my son will break the family curse. I'm not nearly the Mussolini my father was when it came to household soundtrack management, and other influences are percolating. Soon enough the kid might reject the Village People the way he once rejected Marvin Gaye.

But for now, thank God, he's got it bad. And this is why you will find my son and me, rather often, at a two-person dance party in our kitchen. We're rocking out to something profane and autotuned and overproduced and catchy as hell. After dinner but before bedtime, Ben still commuting home, stereo on fire, we jump around that kitchen like nobody's business: mother and son, both sexy, both knowing it.

Lauren Grodstein is the author of the forthcoming "The Explanation for Everything."