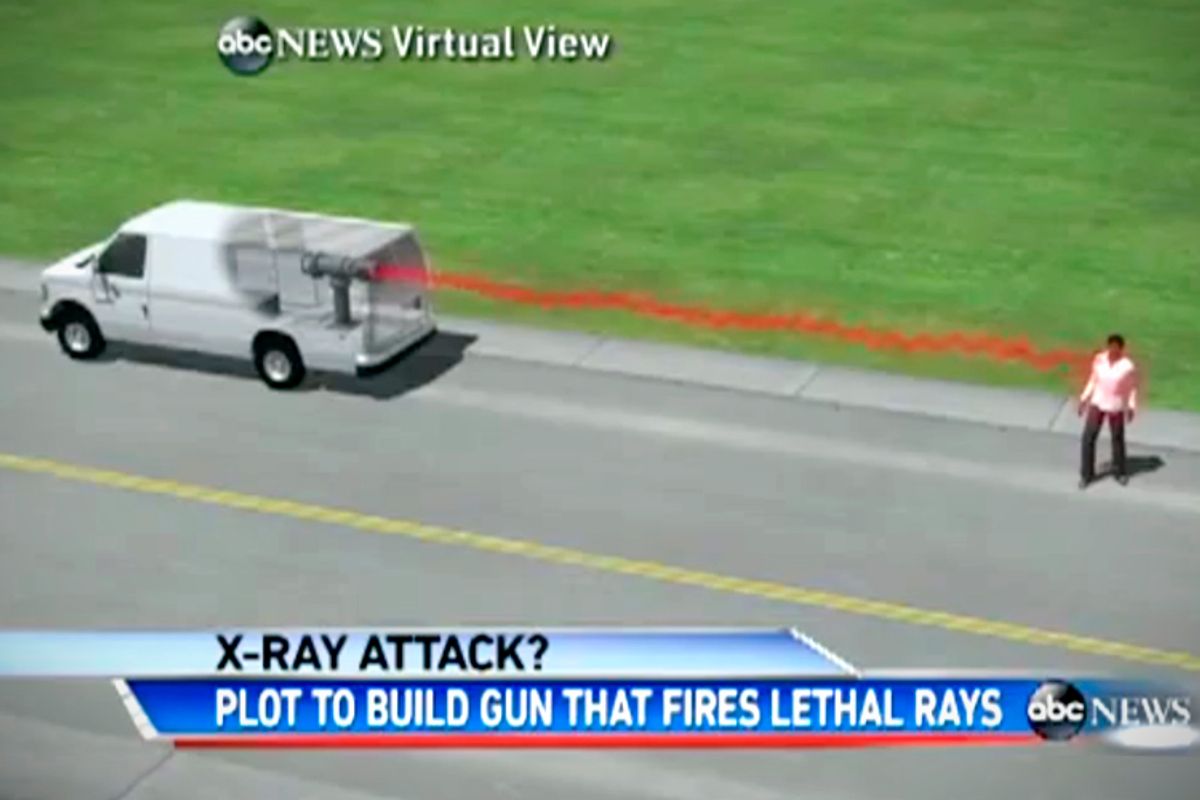 This article was originally published by The Southern Poverty Law Center. It has been corrected since it first posted.

Two men, one of them a member of the Ku Klux Klan, were arraigned today in Albany, N.Y., on federal charges of plotting to build a mobile radiation gun intended to kill Muslims – or “medical waste,” as the plotters called their intended targets.

Glendon Scott Crawford, 49, a Klan member from Galway, N.Y., and Eric J. Feight, 54, of Hudson, are both charged with conspiracy to provide material support for terrorism in the use of a weapon of mass destruction.

The case has been under investigation by a Joint Terrorism Task Force since at least April 2012, when Crawford allegedly reached out to Jewish organizations, asking if Israel would be interested in such a weapon to kill its enemies.

“The essence of Crawford’s scheme is the creation of a mobile, remotely operated, radiation emitting device capable of killing human targets silently and from a distance with lethal doses of radiation,” says a 67-page criminal complaint filed by the FBI.

It might sound far-fetched, but experts told investigators that the design would work, producing a “a lethal, and functioning, remotely controlled radiation-emitting device,” the complaint says

A “central feature of the weaponized radiation device is that the target(s) and those around them would not immediately be aware they had absorbed lethal doses of radiation and the harmful effects of that radiation would not become apparent until days after the exposure,” the complaint says.

At one point, Crawford described his planned device as “Hiroshima on a light switch,” the complaint says.

The charging document contends that Crawford, who worked at a General Electric manufacturing plant, conspired in designing the device with Feight, who the Albany Times-Union identified as working for an electronics company in Columbia County, N.Y.

No actual device was built, the complaint says, but the pair was far along with the design and testing.

“Crawford, conspiring with Feight, and assisted by others, has supervised and successfully completed the building, testing and demonstration of a remote initiation device,” the complaint says. “He now (on or about June 18, 2013) plans to integrate that remote initiation device into a truck-borne, industrial-grade x-ray system, thus weaponizing that system and allowing it to be turned on and off from a distance and without detection.”

The complaint says Crawford described his device as having three core components: “an x-ray tube or system that would emit ionizing radiation; a power supply for the x-ray tube/system; and a control panel that could be used to remotely turn the device on and off.”

The case against the pair, it initially appears, is built around extensive recordings of their conversations and e-mails. Within six weeks of Crawford’s attempts to solicit financing from two Jewish organizations, the FBI was monitoring and recording much of his activity and had recruited an informant.

Last August, Crawford traveled by car from his home in Albany to North Carolina to meet and solicit funding from an unidentified  “ranking member of the Ku Klux Klan,” who cooperated when contacted by FBI agents. In early October, he traveled to Greensboro, N.C., to meet with a cooperating witness and two undercover FBI agents who posed as “Southern businessmen of means who were associated with the KKK.”

The complaint further says the “first and second branches have assisted Crawford with financing and obtaining of parts,” but it’s not clear from the document if that’s a reference to a branch or local unit of the KKK.