Lawrence O'Donnell outraged to read story that isn't about him

Our piece on the media's response to the IRS story gets one MSNBC host fired up, inexplicably 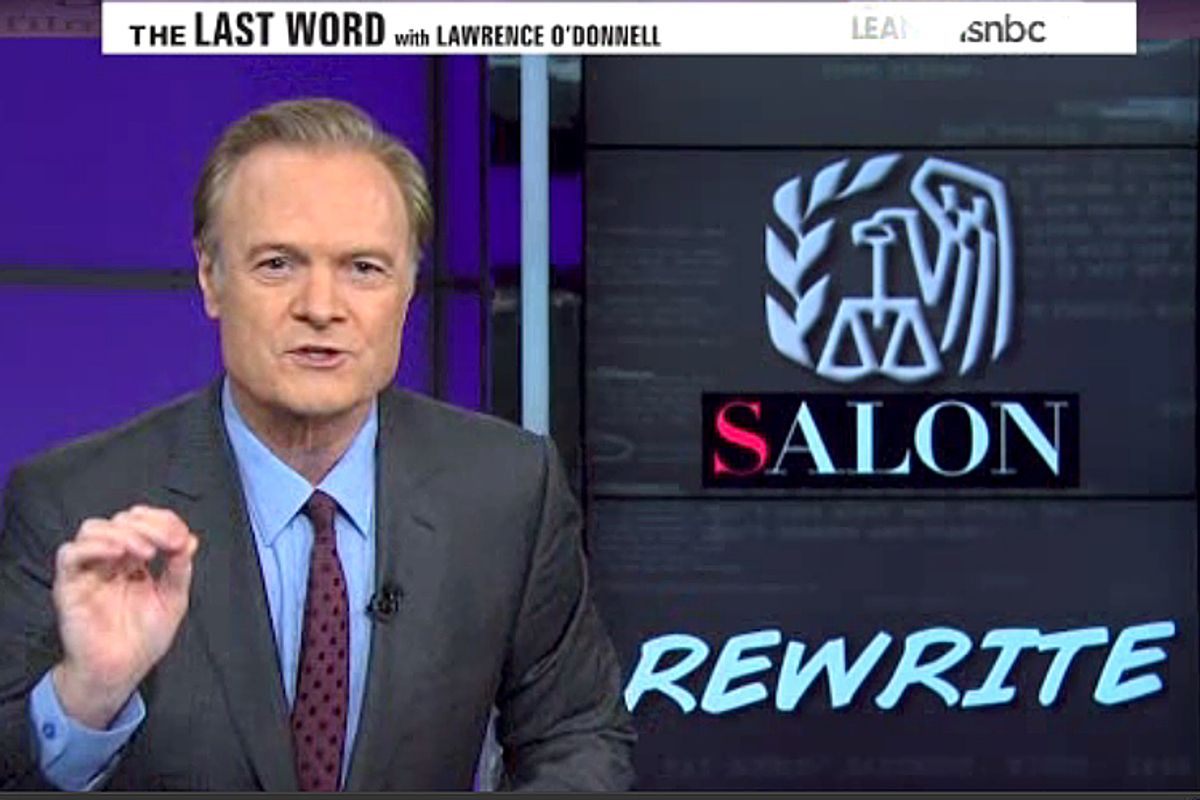 Alex Seitz-Wald wrote a piece Monday showing how the political press blew the IRS "scandal" out of proportion by immediately treating it as a massive scandal. It's a really good piece, too, so go read it.

This story, though, really upset famous television star Lawrence O'Donnell, whom you may remember from USA's "Monk." So O'Donnell began tweeting at Alex Seitz-Wald about it. O'Donnell called the piece "shockingly inaccurate" and asked Seitz-Wald how he could "attack all of @msnbc and not mention @TheLastWord got it right from day one?" I guess omission could be a form of "inaccuracy," in a sense, but it's also not accurate that the piece "attacked all of MSNBC." It criticized specific pundits who said dumb stuff and jumped the gun. It also said nothing about, say, Rachel Maddow, or Melissa Harris-Perry.

O'Donnell went on to insinuate ... something. Something a bit conspiratorial, but in a way that likely only makes sense to him. "You know exactly what you left out and why," he said. I guess because of our lengthy and well-documented anti-Lawrence O'Donnell vendetta.

O'Donnell then tried out a classic asshole bullying maneuver, by invoking Seitz-Wald's bosses (the subtext is usually: I'll get you fired!!) before explaining how he would've written the piece: "I think piece should mention that I said everything in the article from the start including media critique." We will endeavor to include a "here's what Lawrence O'Donnell thinks about the topic of this story" disclaimer in all future Salon articles.

Seitz-Wald added a note and that was the end of it, at least for a few hours, until O'Donnell's TV show came on. Then O'Donnell unloaded on Alex Seitz-Wald and Salon as a whole at length, repeatedly and rather amusingly referring to Salon as representatives of the dreaded "Washington media."

There is a lot in this performance to admire. I especially appreciate the exciting emotional journey undertaken by our protagonist, as he is at first excited by a tweet, and then mortified and saddened to learn that the tweet did not lead to an article that mentioned Lawrence O'Donnell.

I'm going to try to explain this again, Lawrence: The point of the piece was not to showcase the heroes whose need to keep a liberal audience alternately placated or outraged every night led them to get the story "right." The point was to point out which segments of the press got it wrong, and how. The piece was also specifically about the objective press -- the traditional, nonpartisan political press -- and not the explicitly partisan press, which is what you are, Lawrence. At no point did Alex say, "all of MSNBC screwed this up." He was talking about the Beltway centrists and "straight" reporters. You may have also noticed, Lawrence, that the story didn't mention Fox at all. Because they were predisposed to get it wrong, just as you were predisposed to get it "right," or at least to urge that people not take it seriously until the facts were in and they supported your initial premise, more or less. The story also didn't mention the Nation, or Al Jazeera, or Erick Erickson, or ABC's "Modern Family," because that's not what the story was about.

You also seem to repeatedly accuse us of stealing your idea, for a piece about how the press screwed up the IRS story, though I find it odd that you didn't mention, once, the work of Brad Friedman, Joan Walsh or ProPublica's Kim Barker and Justin Elliott. All of those people seemed pretty skeptical back in May. They must have all also ripped off legendary TV newsman Lawrence O'Donnell.

But apparently we got this story wrong because "the author of this piece and Salon itself are indeed Washington media players with Washington media weaknesses." That is news to most of us in New York and San Francisco, where Salon actually has offices. Our entire Washington bureau, in fact, consists of Alex Seitz-Wald. And his cat. Salon has always, since its inception, been based in San Francisco and New York. (By the "one guy lives there" standard Salon could, until recently, have been said to be as much "Rio de Janeiro media players" as "Washington media players.") One might see that sort of statement as so incredibly incorrect that it casts doubts on the veracity of anything else the speaker says. He is perhaps just too lazy to actually check things like "where is Salon located?"

But let's be generous and assume that you are using "Washington" as shorthand for "mainstream political," the way "Morning Joe" reflects the "Beltway" consensus despite broadcasting out of Manhattan. While it is true that Alex lives in Washington, D.C., while you live in what I'm guessing is a very nice home in Los Angeles in addition to what I'm sure is a very nice apartment in Manhattan, according to every important standard by which people are judged to be Washington insiders besides geography, you, Lawrence O'Donnell, are the smug, powerful insider in this situation.

You have worked in politics since 1989, have worked in Hollywood since the 1990s, and have been a mainstream political news television personality since the mid-2000s at least. You have your own television show, in fact! Here is a picture of you at Mika Brzezinski's book party at Arianna Huffington's house. That house is not in Washington, but, again, neither are Salon's offices. Alex Seitz-Wald is a hardworking reporter who does not have his own television show. He did not spend six years working for a legendary United States senator (and obviously that also means he has not spent 20 years dining out on the fact that he worked for a legendary United States senator), though he did I think intern at NewsHour.

(I just want to say now that I am really excited for the "The Newsroom" version of this story, in which the alpha male anchor heroically browbeats someone -- it will be a young woman, obviously, and she will be dismissively referred to as a "blogger" -- into acknowledging how good he is at reporting the news.)

I don't know, Lawrence, maybe you should also look a little closer to home in your search for Washington media players who screwed the pooch on this one. Because we are not the people who employ Chuck Todd and Joe Scarborough and Chris Matthews. Those are your professional colleagues, and I'm sure that hearing from you would benefit all of them much, much more than it benefited Alex. When you rant about the Washington media -- which is also a thing I do, sometimes! -- you are actually ranting about the programming that is on your channel all day long, until the evening. We're the liberals who used to publish Glenn Greenwald. Not the ones that employ Mark Halperin. Maybe a millionaire actor/producer with his own prime-time cable news television show should use his platform for something better than attempting to bully a good reporter into massaging his ego. Just a thought.