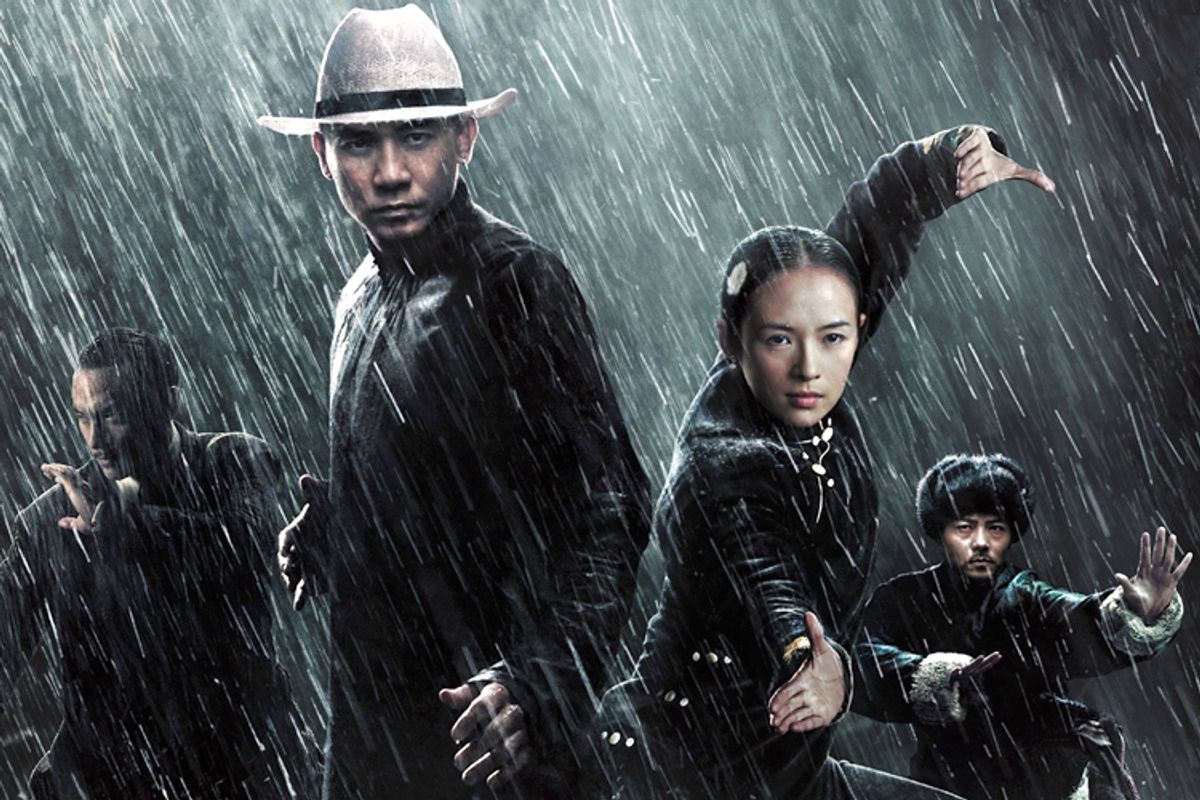 Where do we start with Wong Kar-wai’s “The Grandmaster,” a moody, mannered and often spectacular martial-arts epic that’s been five years in the making (and many more since its conception) and now exists in at least three different versions? First of all, fans of the great Hong Kong auteur who brought us “Chungking Express” and “In the Mood for Love” largely won’t be disappointed. The bizarre Norah Jones misfire of “My Blueberry Nights” target="_blank" six years ago – ultimately not a terrible film, but also not a very good one – has been consigned to the memory hole, and “The Grandmaster” brings Wong back to a gorgeous, heavily stylized Chinese period piece wrapped in nostalgia and melancholy, along with the glorious visages of Tony Leung and Zhang Ziyi as lovers sundered by fate.

Now, as for the question of whether “The Grandmaster” is a great martial-arts movie, or a potential crossover hit in the tradition of “Crouching Tiger, Hidden Dragon” – still, by far, the highest-grossing foreign-language film of all time – or the one about how well it tells the story of Ip Man (aka Yip Man), the legendary martial artist who became Bruce Lee’s teacher, let’s just say those are complicated. There’s gorgeous fight choreography by the masterful Yuen Woo-ping, the godfather of Hong Kong kung-fu cinema, and while Leung and Zhang are actors rather than trained martial artists, they’ve got plenty of experience in the genre, including appearing together in Zhang Yimou's "Hero" 11 years ago. [CORRECTION: In the first published version of this article I said both had appeared in "Crouching Tiger." Zhang Ziyi was indeed in that movie, but Tony Leung wasn't.]

But for Wong, the film’s action sequences really aren’t the point, or not in the same way as in ordinary martial-arts movies. They’re plot devices or punctuation marks, or tools for extending the essentially poetic and aesthetic manner of “The Grandmaster” into physical space. Martial-arts cinema has always had a lot in common with ballet, and this film almost erases the distinction by deliberately smashing the genre’s veneer of masculinity. Of the three most important fights in “The Grandmaster,” only one ends in conventional fashion, with a dastardly villain lying battered and broken on the ground. In two of the three, the victor is a woman – the unflappable Gong Er (Zhang), heir to an esoteric North China martial-arts tradition. One is an intensely romantic pas de deux, which ends with Gong Er and Ip Man (Leung) barely avoiding a passionate kiss. In the philosophical and generational standoff between Ip and Gong Er’s father, the venerable Northern kung-fu master Gong Yutian (Wang Qingxiang), which serves as the movie's philosophical centerpiece, there’s no physical violence at all.

As for the murky issue of the man behind the legend, Wong and his team of writers stick more closely to the actual biography of Ip Man (played here by Leung) than do the action-packed, overtly propagandistic and almost entirely mythological Donnie Yen movies “Ip Man” and “Ip Man 2.” But there’s no meaningful sense in which “The Grandmaster” could be called realistic. It takes place in a Wong-specific dream-China, the China of thousands of movies shot on Hong Kong soundstages, rendered even more abstract. Ip’s South China home city of Foshan is divided between rainy streetscapes and the ornate and decadent interiors of a brothel (whose fixtures and furniture keep being destroyed in kung-fu throwdowns), while Gong Er’s homeland in the north is a permanently snow-covered steppe, just waiting for Genghis Khan and the Mongols to come riding through.

While we know that the story of Ip Man’s rise to prominence, his almost-romance with Gong Er and the global spread of his Wing Chun martial-arts style covers the tumultuous 20th century in China, the Japanese invasion of the 1930s appears only as background, and other seismic historical events are never mentioned at all. The real Ip Man was a policeman in pre-revolutionary China who moved to the British territory of Hong Kong in 1949 (later to teach an American-born teenager named Bruce Lee) because he was an officer in Chiang Kai-shek’s Kuomintang and a fierce opponent of Mao Zedong and the Communist Party. For obvious reasons, it’s better not to bring any of that up today. Instead, “The Grandmaster” spins out a piecemeal history of Ip’s semi-amicable duel with Gong Yutian, and the prideful, long-distance, unresolved romance that then blooms between Ip and Gong Er, guardian of her father’s legacy.

Since I haven’t seen the 130-minute cut of “The Grandmaster” that opened in China last winter, or the slightly shorter international version that premiered at the Berlin Film Festival, I can’t discuss whether the recut version being released in the United States by the Weinstein Co., which is shorter still and features some new explanatory titles and narration, is a travesty. David Ehrlich of Film.com certainly thinks so, but to make things still more confusing, some of the scenes he describes as deleted from the American cut were actually in the film I just saw in New York. It’s always delightful to leap to the conclusion that Harvey Weinstein has picked a miraculous flower and crushed it in his blackened, Sauron-like fist, but it’s also important to remember that Wong is a compulsive, Henry James-like tinkerer who seemingly never arrives at a final version of his films. (As Ehrlich notes, Wong released a new edit of his 1994 “Ashes of Time” 14 years after its initial release.)

All indications are that the 108-minute American release of “The Grandmaster” is Wong’s work just as much as the earlier versions are. (The Chinese cut is available from Amazon on import DVD and Blu-ray, and no one who knows Wong's work will be surprised if the rumored four-hour version appears one day as well.) If the storytelling is a mess it’s his mess, and anyway that’s never been where the appeal of his movies lies. As shot by Philippe Le Sourd (who has taken over for Wong’s longtime cinematographer Christopher Doyle), “The Grandmaster” is a series of masterfully composed tableaux and set-pieces, some of which happen to be fight scenes. It’s about Leung’s supremely contained performance as a man who loses everything except his sense of mission, and Zhang, who is if possible more beautiful than ever, playing a tragic heroine who gives up everything except her family’s honor. At one point Gong Er observes that people who claim they have no regrets are not facing the truth, an aphorism that might describe Wong's approach to love, cinema and life.

In the end, I’m inclined to believe that “The Grandmaster” isn’t a movie about Ip Man or martial arts at all. Maybe it’s about the psychic traumas of China in the 20th century, and maybe it’s about gloriously irrelevant pictures of people drinking tea and dying of loneliness. It’s certainly not Wong’s greatest work; it may be a masterpiece that evades the mass audience or a beautiful failure with moments of greatness. All I know is that I got lost in it, and that I would still have loved it if it were twice as long with half the action.

“The Grandmaster” opens this week in New York and Los Angeles, with nationwide release to begin Aug. 30.