Countless Syrians are without adequate food -- but an old U.S. law ties the hands of those who would deliver it 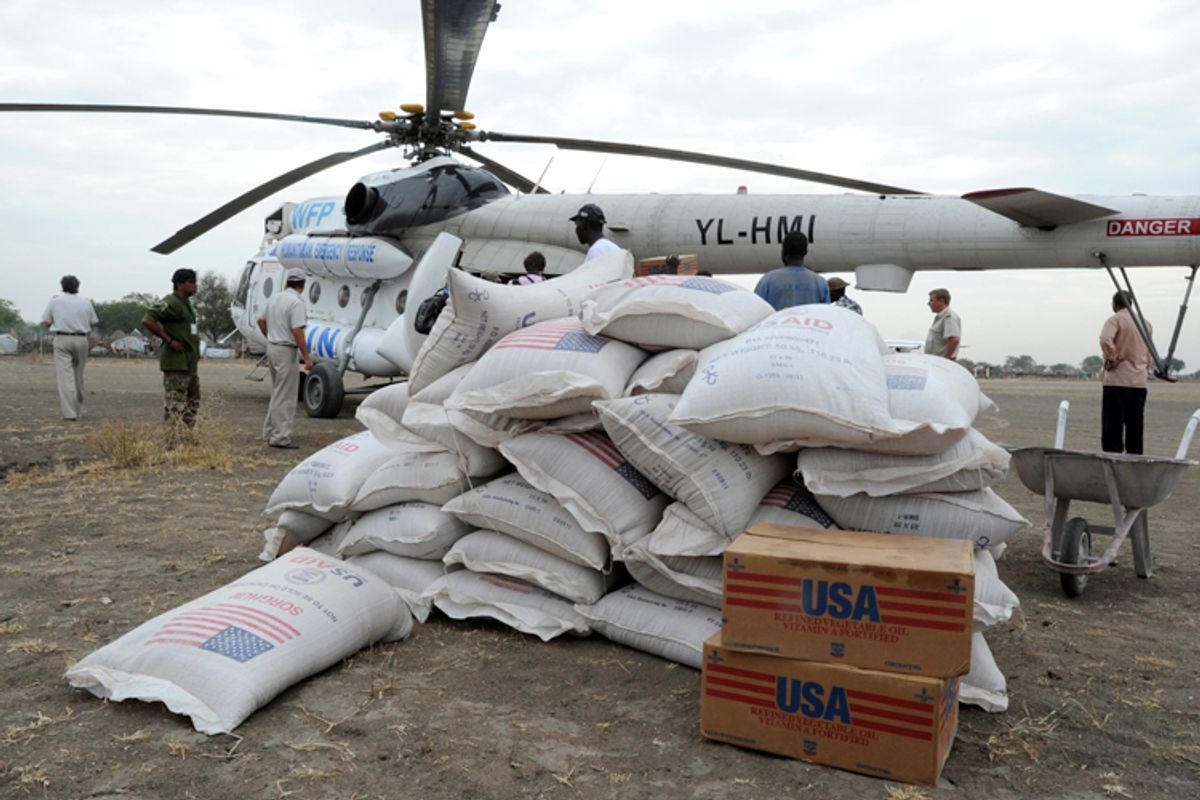 The deadly gas attack in Damascus last month has focused world attention on the plight of civilians in Syria, who are being crushed between the combatants in the country’s civil war.

Over 2 million people have so far fled the country, most of them within the past six months, straining the capacity of the neighboring nations of Lebanon, Jordan, Turkey and Iraq to cope. Fear of U.S. airstrikes have reportedly increased the surge of new refugees, with 5,000 to 6,000 people now streaming across the border daily.

The official refugee figures, bad as they are, don’t include an estimated 4 to 6 million people -- nobody can say for sure -- who are now displaced within Syria itself, many of them without access to adequate food and clean water. International aid agencies are scrambling to figure out how to help feed the nation whose agricultural system is currently in tatters.

Wheat production, for example, is believed to be 40 percent lower in Syria this year than it was before the war began. And food distribution in some areas is grinding to a halt. "Rising violence in many parts of Damascus and Homs, and a proliferation of checkpoints around the main cities have hit the flow of food," warned Elisabeth Byrs, a spokeswoman for the United Nation’s World Food Program.

International agencies are sending food aid. But it is funneled through the Syrian government, which has blocked it from flowing to areas that it does not control. In a bold exception to this rule, the USAID, is currently running a covert, cross-border aid operation on the Turkish border, and a smaller one on the Jordanian border, according to NPR’s Deborah Amos.

Syria’s food woes began long before the current civil war. The worst drought in the nation’s history -- from 2006 onward -- has withered crops, forcing hundreds of thousands of farmers and herders off their land. Making matters worse, the Assad government’s wasteful water-intensive agricultural schemes have caused water tables to plunge in some areas, with many wells going dry or becoming brackish.

Desertification has combined with the current fighting to create a perfect storm of food insecurity in a region that was once, ironically, called the breadbasket of the Middle East. Inflation in the prices of staple commodities, such as wheat flour, bread and sugar, have risen by over 100 percent over pre-war levels in Syria’s urban areas. With unemployment in the country running at an astonishing 60 percent, according to Oxfam’s senior policy adviser Noah Gottschalk, more are going hungry every day.

Gottschalk told me that the British-founded confederation Oxfam hopes to radically scale up its assistance in the coming months. But it’s been rough going in a country where travel is perilous, food aid is frequently stolen, and aid workers are targeted; 95 have already died in the conflict.

The work of these organizations is made even more difficult by public apathy. Gottschalk says that Oxfam’s long-standing appeal for Syria is only 40 percent met, which pales in comparison with the success of their earlier relief effort in Haiti, after the 2010 earthquake. This disappointing response may be because the media has focused attention on the military situation rather than the humanitarian disaster, and also because people feel hopeless about a situation that looks increasingly intractable with no end in sight.

While nongovernmental organizations struggle to respond to the crisis, the largest food aid operation in the world, the USAID, has been hampered by its own regulations and budget shortfalls. Cornell economics professor Chris Barrett told me that the agency’s food aid shipment volumes have fallen 60 percent in the past decade. “That’s woefully insufficient. Hence the need to use each scarce disaster relief food dollar more efficiently.”

But Barrett says that current rules have made efficiency all but impossible. For one thing, USAID is required by law to buy food from farmers in the United States and then ship it overseas on U.S. flagged vessels. This is a holdover from the days when the U.S. government bought crop surpluses from American farmers and agribusinesses, a price support program that ended in the 1990s.

The Obama administration has so far performed a skillful end run around this law (Barrett calls it a “workaround”) using international disaster assistance (IDA) funds rather than food aid resources to finance its Syrian relief efforts. (IDA funds, unlike food aid, can be used to purchase food on the ground in the region where it is needed, rather than being shipped all the way from the U.S., a process that takes months.)

Not only is local purchase far cheaper, but it supports regional agriculture and markets instead of undermining them with massive floods of free grain. The main advantage, however, is that it gives the U.S. the flexibility to respond quickly to fast-developing crises, like the one in Syria.

The administration has tried to change the restrictive food aid law. Legislation that would permit local procurement of food was included as an amendment to this year's farm bill by California congressman Ed Royce, but narrowly defeated.

The result according to Eric Munoz of Oxfam may be catastrophic: “If we have a natural disaster now in another part of the world,” Munoz warns, “the U.S. simply isn’t going to have the flexibility to adequately meet that need.” That’s because we’ve diverted limited disaster funds to Syria, and have already “maxed out” on our assistance budget.

Pretty much everyone agrees that the Syrian crisis proves the need for food aid reform. But don’t hold your breath. So long as Big Ag is pushing legislators to continue requiring that food aid gets purchased in America, we’re unlikely to replace our current wasteful and potentially disastrous system with something more sensible.