Amanda Knox: "I have to think the worst-case scenario"

The tabloid queen talks to "Today" about how the country sees her: "I’m either a victim or a bloodthirsty killer" 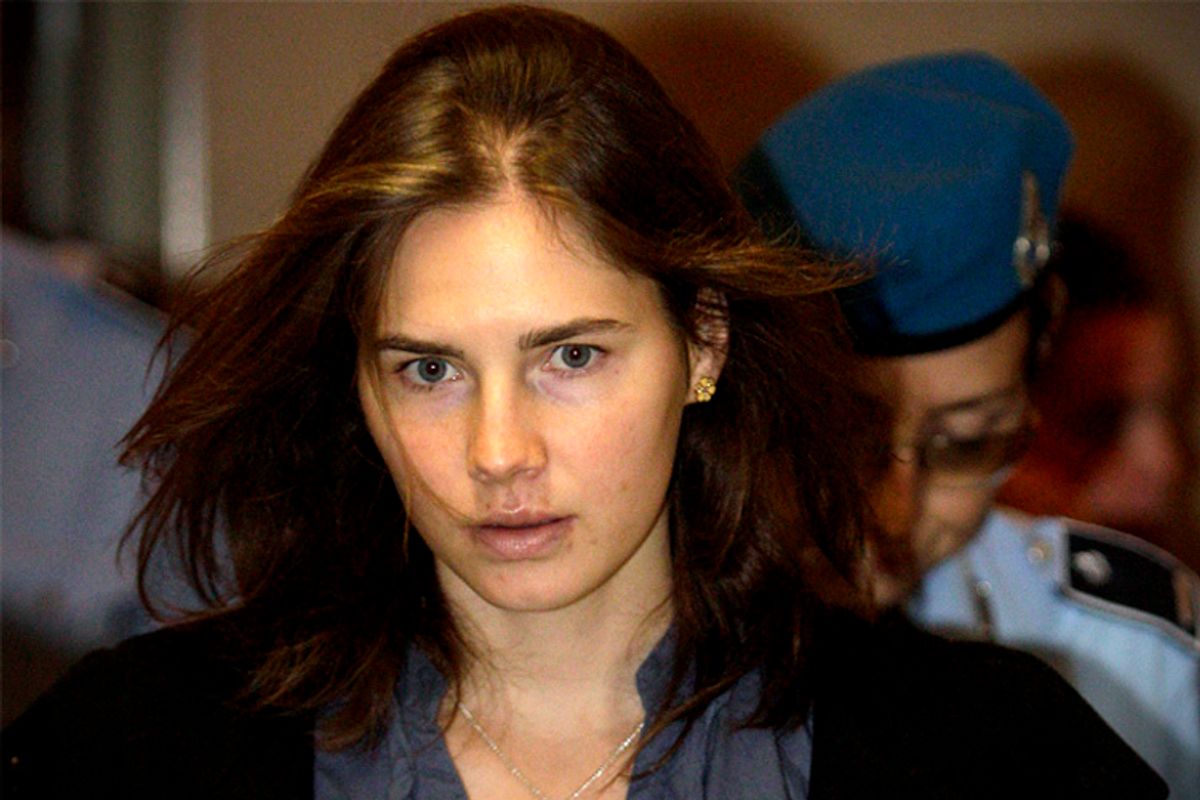 It didn't matter that everybody knew Amanda Knox wasn't going to say anything new on the "Today" show Friday, that she wasn't going to drop any big bombshells. It didn't matter, because Amanda Knox is such a subject of deep public fascination, she could have sat in that chair opposite Matt Lauer and said nothing at all, and people would have tuned in. And she knew that. Amanda Knox – whose name has become synonymous with a lurid murder, and all those rumors about orgies and devil worship and drugs. The tabloid headline queen of the world. The pretty, all-American girl.

Six years ago, Knox was a student in Italy when her roommate Meredith Kercher was murdered in their lodgings. Though another individual -- Rudy Guede -- was convicted of sexually assaulting and killing her, Knox and her then-boyfriend, Raffaele Sollecito, were also prosecuted in the case. They served nearly four years in Italian prison before they were released two years ago. But in March, the Italian courts overturned the acquittal. The case is being tried again later this month. This time, however, the 26-year-old Knox is a woman living in the United States, and she's steadfast in her choice to not return to Italy to face the Italian courts one more time.

Speaking with Matt Lauer in a lengthy interview, Knox admitted, "It's been a hard month. It's so crazy. It's happening so fast and I'm not quite sure what's going to happen ... I was already imprisoned as an innocent person in Italy, and I can't reconcile the choice to go back with that experience. It's not a possibility. I just can't relive that." And she rebutted Lauer's questions over whether not returning would be seen as an admission of guilt. "There are so many factors that are not allowing me to go back," she said, "financial ones, ones where I'm going to school, ones where I want the court to proceed without distraction. I was imprisoned as an innocent person. It's common sense not to go back ... What is being on trial here is not my character. It shouldn't be. What should be on trial are the facts of the case. If you look at the facts of the case, there's proof of my innocence," she said. "There's no trace of me in the room where my friend was murdered. There are traces all over the place of the man who actually did this. Rudy Guede was convicted, his DNA was everywhere, and it's impossible for me to have participated in this crime if there's no trace of me."

Though she says her lawyers have not made plans for how to handle her extradition if she's reconvicted, "precisely because they're still confident that we can win this," she also admits, "I have to think the worst-case scenario. I have to prepare in my mind what that would be like. I thought about what it would be like to live my entire life in prison and to lose everything, to lose what I've been able to come back to and rebuild. I think about it all the time. It's so scary. Everything's at stake."

In a conversation with ABC News earlier this month, Knox spoke of panic attacks and anxiety that began while she was imprisoned and continued even after her release. She says she still suffers post-traumatic stress disorder that "debilitates me." In her post-prison life, Knox has demonstrated that she's keenly aware that, as she's said in a previous interview, "There is a polarization: I’m either a victim or a bloodthirsty killer who got off scot free." She's spent the past two years figuring out what to make of her unusual state, "torn between my life moving forward with school, with work, with my relationships and feeling forever being dragged back into the quagmire of incredible helplessness." She received a $4 million deal with Harper Collins for her memoir, "Waiting to Be Heard," which was released last spring. She's done big-ticket interviews with Diane Sawyer and CNN. For "Today," Knox penned an essay in which she imagined herself in the distant future, still a prisoner, longing for a child she'd never had. On Friday morning, Carson Daly Instagrammed a photo of himself grinning broadly next to a smiling Knox and her sister. For now, Amanda Knox's chief job is being Amanda Knox.

Like any sane human being who spent four years in prison, Knox dreads the thought of a return to trial and possible reconviction. But she also obviously knows that here in the outside world, she remains in the strange position of notorious celebrity, even as she tries to define that celebrity on her own terms. What other choice does she have? She is a young woman made famous by someone else's death. "At this point Meredith is a part of my life," she told Lauer. "I only knew her for a very short amount of time, but she'll always be there."