"CBGB": The birth of punk, made ludicrous

The songs are great and the real club was reassembled (in Georgia). Maybe the badness of "CBGB" is its genius 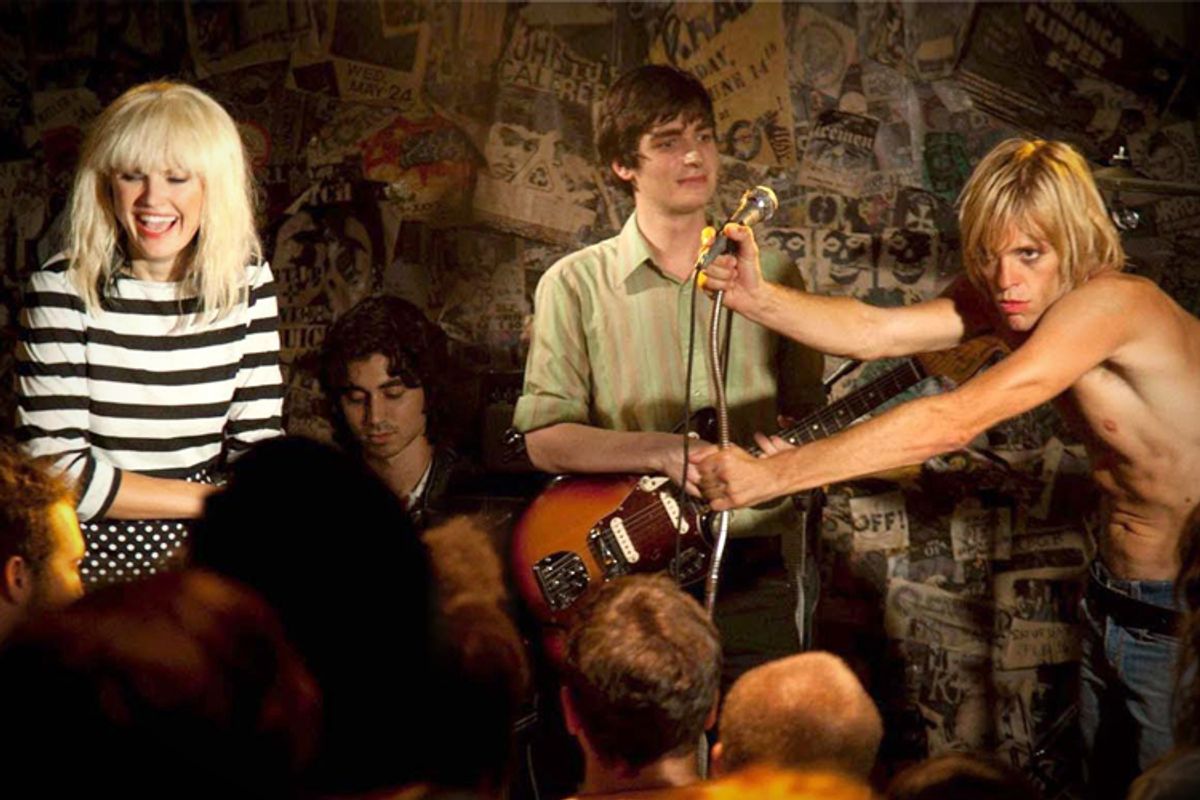 Let other critics do the heavy lifting of convincing you that Randall Miller’s film “CBGB,” a misguided tribute to the Manhattan nightclub that housed the late-‘70s punk revolution, isn’t very good. Indeed, it’s ludicrous, with an entire cast of reasonably competent actors doing atrocious Noo Yawk accents, street scenes shot somewhere that is obviously not Noo Yawk (I assumed it was Toronto, as per usual, but it turns out that bits and pieces of the original CBGB were reassembled in Savannah, Ga.), and punk-celebrity look-alikes lip-syncing to the hits of Television, Talking Heads, Patti Smith and so on. I’m here to tell you why I enjoyed “CBGB” despite its terribleness. Or rather, because of its terribleness.

Intermittently framed by comic-book devices in imitation of John Holmstrom and Legs McNeil’s mid-‘70s fanzine Punk (which essentially introduced the term, in its musical-cultural sense), “CBGB” has more of the original prankish punk spirit than it even recognizes. In deflating that much-revered period of American pop-culture history through its shot-in-Savannah combination of amateurishness and good intentions, “CBGB” becomes the kind of cultural subversion the Situationists called a détournement. This is the punk revolution told in terms the punks themselves would have recognized in 1977 – the spirit of Andy Warhol appearing on “The Love Boat,” of a network television prime-time special recalled, years later, through a haze of marijuana smoke. It’s punk rock as seen on “Barney Miller,” and you either get that reference or you don’t.

Does my admittedly imaginative rereading of a bad movie amount to a claim of redemption or, still further, into encouraging you to see it? Don’t put that on me, babe; grow up and make your own choices in life. I am merely suggesting that there’s something – not something ironic, actually, but something appropriate – in the fact that this thoroughly miscast and badly made production is the CBGB movie that actually made it to the finish line. Mary Harron, the director of “I Shot Andy Warhol” and “American Psycho,” who was a regular at CBGB during her early career as a rock journalist, spent some years trying to make a film based on Legs McNeil and Gillian McCain’s oral history “Please Kill Me,” the definitive account of early punk. That film would have had the mark of authenticity, but as far as I know the entire project hit the rocks (although I’d love to be wrong about that), and instead we get this one, which retails numerous anecdotes and even lines of dialogue strikingly similar to those found in “Please Kill Me” – and in which Mary Harron appears as a character, played by Ahna O’Reilly. How punk is that?

I could make a list of 30 or 40 actors to play Hilly Kristal, the garrulous New Jersey native who had already bankrupted himself twice when he accidentally served as midwife to the birth of punk by buying a “shithole” bar on the Bowery, on Manhattan’s then thoroughly scummy and neglected Lower East Side. I could complete that list and I still wouldn’t have gotten to Alan Rickman, the ace English actor best known as Severus Snape in the “Harry Potter” films. Then again, Rickman is a classic character actor who has played Americans several times, and arguably Hilly Kristal isn’t as big a stretch as Ronald Reagan, whom he plays in “The Butler,” weirdly and memorably. He actually nails Kristal’s implacable, slow-burn, possibly stoned demeanor perfectly, and you can’t blame Rickman for the fact that the entire movie around him, my arguments re accidental brilliance aside, has no reason to exist.

There are bits and pieces of enjoyable comic business scattered throughout “CBGB,” in and around the karaoke-style musical numbers that signal big discoveries, which range from Television’s “I Don’t Care” and Talking Heads’ “Psycho Killer” (both appropriate to the time and place) to Patti Smith’s “Because the Night,” which was certainly her biggest hit, but was co-written with Bruce Springsteen two or three years later, after she was already famous. Malin Akerman, whom I normally enjoy, gives a shtick-laden performance as Blondie’s Deborah Harry that manages to get Harry’s blasé sexuality totally wrong. Joel David Moore and Julian Acosta play the jittery, feuding and tweaked Joey and Johnny Ramone (respectively) with amusing accuracy – but the filmmakers didn’t get the rights to any actual Ramones songs, so they perform an obscure Joey Ramone solo single from years later. Iggy Pop (Taylor Hawkins), Lou Reed (Kyle Gallner), Sting (Keene McRae) and other luminaries drift through the background, laying it on thick to let us know this is a cool movie and we’re cool to be watching it. Not really, guys!

The inside of CBGB looks convincing enough, I guess (since much of it is the original interior), with the proviso that I’m from the West Coast and never saw the place until the early ‘80s. The outside is in Savannah and features rats, bums lighting fires in trash cans, cops with “dese and dose” accents and those sky-blue uniform shirts, and other pseudo-authentic bits of flair. I think that sums it up. Former Dead Boys guitarist Cheetah Chrome has a bit part as a cab driver, which may help explain why director Miller and co-writer Jody Savin get sidetracked into the history of that particular band. Then again, I feel a certain artistic sympathy for that decision. Making a movie about the nightclub that spawned the Ramones, Talking Heads, Blondie and Patti Smith and using a whole bunch of it to tell the story of the Dead Boys -- a band that seemed to have all the ingredients to become a cultural phenomenon but never did – there’s something beautiful in that. That “CBGB” can capture the spirit of its subject in such an ass-backwards way and also consign itself to immediate oblivion -- there lies its perverse punk victory.