"Blue Is the Warmest Color": Beyond the sex and controversy, a great love story

Fights and sex scenes aside, "Blue Is the Warmest Color" is a vivid, vibrant tale of a woman's first great passion 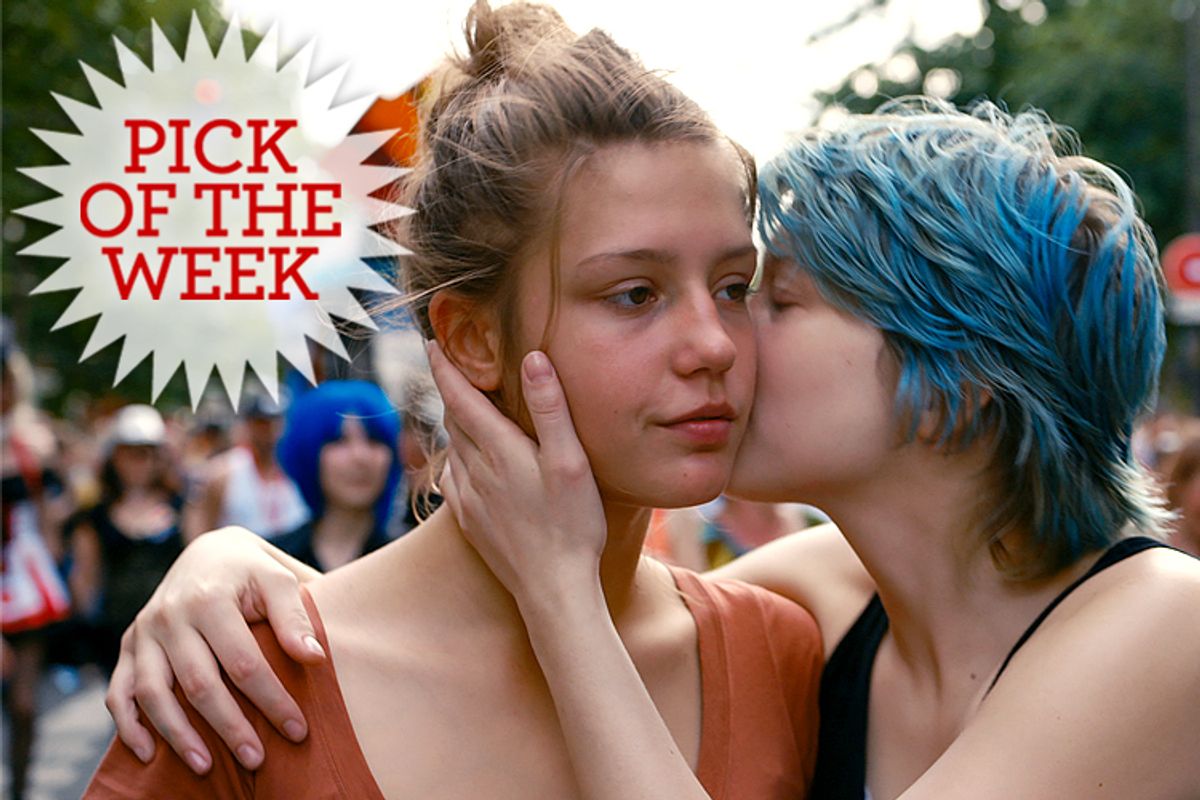 From the first screening of “Blue Is the Warmest Color” at Cannes last May, it was clear that this was a movie that could and would provoke strong reactions. As I wrote at the time, it was remarkable how quiet an auditorium packed with 800 or so caffeine-buzzed journalists could get. Amid the often-superficial marketplace of ideas and the petty party atmosphere of that festival, where the line between art and commodity has long since been erased, Tunisian-born French director Abdellatif Kechiche’s spellbinding love story offered an unusually intimate experience. And I’m not principally talking about the film’s now-legendary sex scenes between two young women, the first of which lasts almost 10 minutes. Those scenes were intended to be challenging and destined to be controversial, but they are woven into the film’s design, not the reasons for its existence.

What we certainly didn’t know in Cannes was that at least some of the controversy surrounding “Blue Is the Warmest Color” would arise in the form of bitter disputes among the people who made it. Kechiche accepted the Palme d’Or, the film world’s biggest non-Oscar prize, alongside the film’s young stars, Léa Seydoux and Adèle Exarchopoulos (itself an unusual move), amid all the customary kisses, embraces and tears of gratitude. But it didn’t take long for the two actresses to begin airing their grievances about Kechiche’s tyrannical directing style, along with the exhausting working conditions of a shoot that lasted almost six months. (That first sex scene alone apparently took 10 days to complete.) Seydoux, who is 28 and a far more experienced performer than the teenage Exarchopoulos, has described the filmmaking experience as “horrible” and said that at times Kechiche made her feel “like a prostitute.”

You can throw in the fact that comic-book artist Julie Maroh, author of the original graphic novel on which the film is based (the screenplay is by Kechiche and Ghalia Lacroix), has suggested that Kechiche turned her queer coming-of-age fable into porn and quipped that what was missing from the movie were actual lesbians. (Both actresses are heterosexual, and the director is a straight man.) Rather than trying to calm the waters, Kechiche has only poured gasoline on his worsening feud with Seydoux. First he told a British interviewer that the film shouldn’t even be released if people weren’t smart enough to understand it. Then he retracted that, only to reignite the whole thing more recently in a long, ranting Op-Ed for a popular French website, in which he called Seydoux an “arrogant and spoiled child” who was trying “to fine-tune her image as a ‘rebellious’ and mysterious star.” He also suggested that Seydoux’s vitriol against him was being manipulated by a pair of influential French cultural figures, Aureliano Tonet, who is an editor at the Paris daily Le Monde, along with film producer Marin Karmitz.

Whew! Well, I guess there’s a good reason why this guy works in movies rather than, say, diplomacy or the law. Nobody ever said that artists tend to behave calmly and rationally, or lack healthy egos. Let’s also notice that while Seydoux has made it clear that she didn’t enjoy working with Kechiche and wouldn’t do it again, she has never suggested that he made a bad film, or that he didn’t extract a marvelous performance from her with his control-freak tactics. Does the end justify the means, and which of the people in this Gallic pissing match is being more ridiculous and unfair than the other? Well, you and I cannot possibly know that. We weren’t there.

One thing we can say for sure is that this is nothing new in the history of cinema, especially (and unfortunately) when it comes to the tormented relationship between male directors and female stars, as overloaded a topic in film studies as one could imagine. Alfred Hitchcock was a major creepazoid who sexually harassed his leading ladies in ways that would be construed as illegal and profoundly offensive today. Bernardo Bertolucci became famous for his on-set trickery and emotional abuse; Maria Schneider said she felt as if she had been raped after the famous anal-sex scene with Marlon Brando in “Last Tango in Paris.” Shelley Duvall supposedly started losing her hair at age 30 after making “The Shining” with Stanley Kubrick (they did 127 takes of that baseball-bat scene). Faye Dunaway threw a cup of her own urine on Roman Polanski while shooting the final scene of “Chinatown,” Lars von Trier feuded with Björk during “Dancer in the Dark” and Nicole Kidman during “Dogville,” etc., etc.

To state what I hope is obvious, this whole subject is fraught with issues of gender politics and art history that go far beyond the movies. So too is the question of how to understand the sex scenes in “Blue Is the Warmest Color,” but we can start with the premise that Julie Maroh is right, in a way: This movie was not made by and for lesbians, and now it is inherently bound up with the history of the “male gaze” in cinema and art. But to coin a phrase: So what? So is everything else. My brain is a bit of a rebellious beast on these issues, but so is everybody’s. Isn’t the real question about the movie’s aesthetic, dramatic and emotional power, not about whether horny guys might be turned on by it? I can speak only for myself on this front – and I’ve already heard murmurs that “Blue” plays strongly as a hetero date-night experience – but I found the raw emotion of the sex scenes (and the equally affecting later scenes of pain, fighting and breakup) more potent than any purely prurient appeal. It’s not 1953, people – if your goal is to see French girls get naked, it’s not like you need to sit through a three-hour art film to achieve that.

So I suppose the danger is that “Blue Is the Warmest Color” will get swallowed up in stories about the movie where two hot women get it on and then everybody hated each other ever afterward. If you wind up watching the film, it’s something entirely different, a spellbinding journey with a shy working-class teen named Adèle (Exarchopoulos) through her sexual maturity and early adulthood, and especially her first great sexual and romantic passion. (The French title of the film translates as “The Life of Adèle, Parts 1 and 2,” which sends the signal that Kechiche was seeking some distance from Maroh’s graphic novel.) That this first love affair, first sexual experience and first brutal heartbreak happens with another woman, a slightly older lesbian with dyed blue hair named Emma (played by Seydoux with wonderful, slightly mysterious confidence), both is and is not important.

It’s not clear whether Adèle conceives of herself as being gay, and indeed she may not be; her other affairs seem to be with guys. Despite Maroh’s misgivings about the film, its allegedly abusive and entirely heterosexual director has in fact framed the story as a loving embrace of queerness. “Love has no gender,” a male friend of Emma’s tells Adèle in a gay bar, the first time she ever goes inside one. “Love whoever loves you. Man, woman – what does it matter?” As Adèle will find out in due course, you can wind up being the one who washes the dishes in any genre of relationship.

Shot largely in close-up and focused on the combustible performances of its remarkable young stars, this intense and unpredictable film goes well beyond issues of sexual discovery and sexual politics. Set in the unpretentious provincial city of Lille, it depicts the social and political anxieties of multicultural contemporary France, where Arab pop music, anti-austerity demonstrations and gay pride marches go hand in hand. If Kechiche has been identified up to now with movies about racial issues and the Arab-French minority (don’t miss his magnificent “Secret of the Grain,” if you haven’t seen it), this one could be viewed as his declaration of patriotism, his embrace of 21st-century Frenchness in all its multiplicity and difficulty. One could argue, indeed, that for a male filmmaker from an Arab background to make a film that contains numerous scenes of steamy and explicit lesbian sex is itself a political statement. (To anticipate a question you’ll ask after seeing it: Yes, the sex between Seydoux and Exarchopoulos is simulated, not “real,” but in this case the line is pretty blurry.)

Even by French standards, “Blue Is the Warmest Color” is pretty racy. Some Cannes critics leapt to the reactionary conclusion that it would have to be edited down for American release, but as the movie itself informs us, the world is changing. IFC is releasing it with an NC-17 rating, which would once have meant there were only a few dozen theaters in the country likely to show it. Nobody’s quite sure what that means now. (Yes, it will certainly reach VOD before long, but Sofian El Fani’s gorgeous, fluid, up-close cinematography deserves to be seen on the big screen, if at all possible.) Ratings and controversy and gender politics and personal feuding aside, this isn’t really a movie about sex, or about being gay or whatever. It’s a vivid and vibrant film, alive with color and life, that’s both social and personal, universal and specific. It’s about being young and falling in love and making exciting and terrifying discoveries and screwing it all up and having your heart broken in a country and a world that are transforming themselves with bewildering speed. It’s perhaps the first great love story of the 21st century that could belong only to this century.

“Blue Is the Warmest Color” is now playing in New York and Los Angeles, with a national rollout to follow.