"We’re up against the wall and they’re talking about...benefits in reducing the SNAP program," says Conyers 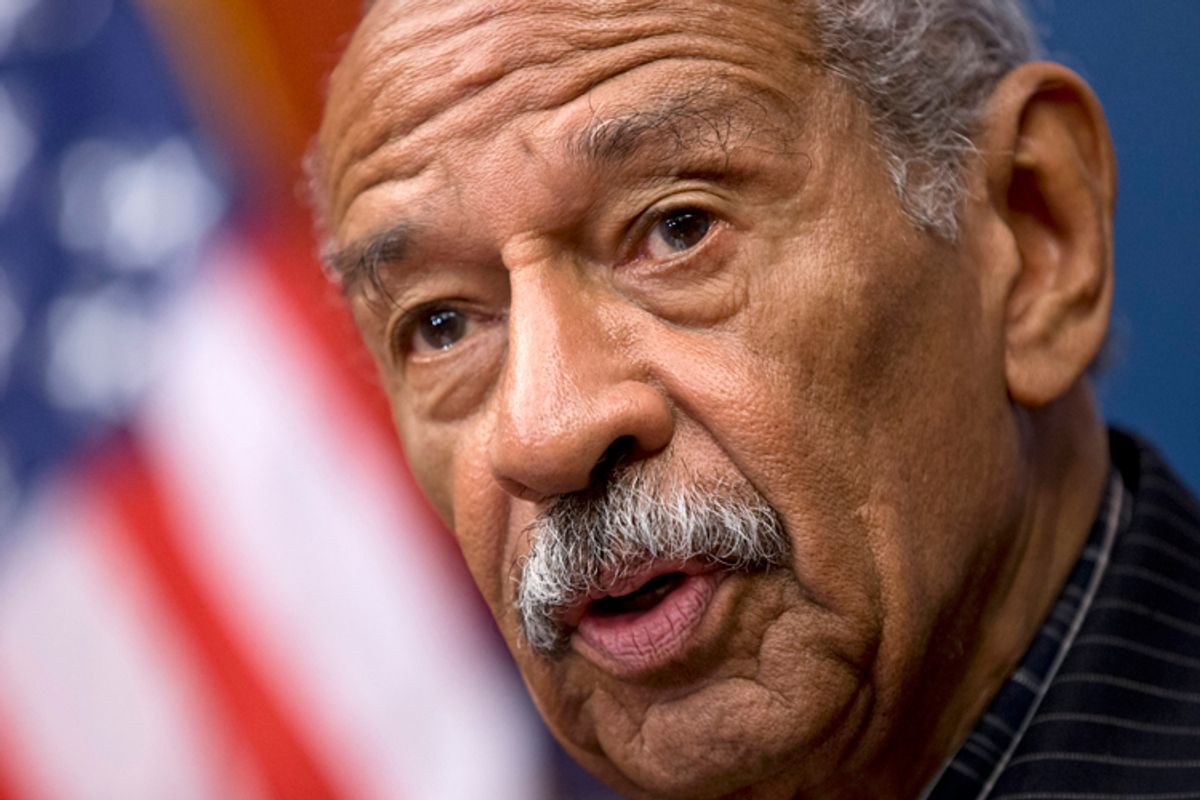 At midnight Thursday, America’s already recession-battered food stamp program took a major hit: the expiration of additional funding authorized under the stimulus. “If you look around the world,” the head of the country’s largest food bank told Salon Monday, “riots always begin typically the same way: when people cannot afford to eat food.”

Hours before the $5 billion annual food stamp cut kicked in, Salon spoke with Detroit’s 25-term Congressman John Conyers, who’s introduced legislation to restore the expired funds. The Michigan Democrat predicted “an uphill climb” against hunger, defended the “welfare reform” passed by Bill Clinton, and blasted Wal-Mart comments on the bright side of cuts. A condensed version of our conversation follows.

The expiration of the extended [Supplemental Nutrition Assistance Program] benefits…what’s going to be the immediate impact of that?

Oh, I think it’s going to have a very negative impact. Because look: this is a matter of nutrition. And after today, households participating are going to see their monthly benefits sharply reduced -- which really, Josh, translates into less money a month for people of very poor means to get food. And we’re talking about 36 dollars a month. And per meal they’ve figured out that it will be about a dollar and 40 cents less. So we have to -- it’s serious. This isn’t a small matter. I mean, getting enough nutrition is I guess one of the first rules of continuing existence.

To what extent do you think children or adults are going to go hungry because of this expiration?

Well, we think that it’s going to be pretty serious. I know in my state of Michigan, there’ll be a $183 million cut from SNAP benefits. Meaning that 1.7 million recipients will be impacted. And the thing that worries me is that many of them will be young people. So that the program designed to help eliminate hunger, by this cut will only increase it.

And so Barbara Lee of California and I have got a bill in that would for one year extend the benefits in the Recovery Act… A very small way to stave it off, but it also increases the chances that enough people will go along with the measure, and get it through the Congress right away.

Do you think that measure is sufficient to enable the food stamp program to address the severity of the challenge in terms of hunger?

It would provide a one-year extension of the benefit increase and it’ll go through the fiscal year of 2014. It’s a very small and temporary improvement. I mean, we’ve got to go back and keep pounding away. But this gets us out of the cutbacks that we’re confronted with without this bill.

How much growth do you want to see in the funding available to the food stamp program?

I haven’t calculated… We would like to see it increase. But right now, Mr. Eidelson, I’m confronted with trying to keep it from being cut.

Beyond staving off that cut, is there anything positive that you think can realistically be accomplished in the House of Representatives in the next year on poverty or on hunger?

Well, it’s an uphill climb. The conservatives outnumber us by 17 members And so when the Republicans all stick together, we’re in trouble. And I don’t have a path yet of a group of Republicans that are willing to join us so that we can do something in the House. I think the Senate is a much more optimistic legislative body. But to answer your question, that’s exactly what we have to do, is increase our bipartisanship on this issue. And it may be able to be done. But it’s too early to be overly optimistic about it at this point.

Are you having conversations with Republican Congress members about the food stamp issue right now? What are those conversations like?

Well, they are very -- they are very tentative… We don’t have a list of committed people that I can tell you, “x number are going to be with us.” But we’re opening ourselves up for that discussion, and hope we can get it going.

Wal-Mart’s U.S. CEO… [said] the company was “cautious but modestly optimistic” that if food stamps are cut, that will lead to better business for Wal-Mart, because it will make people even more price-conscious if they lose some of their food stamp benefits. What’s your reaction to that?

Well I – it’s incredible to me that eating less is going to make you more economically effective. I don’t think – I don’t think they deserve -- that kind of issue deserves a response. Because we’re talking about people merely getting the nutrition that an average person needs, and we’re up against the wall -- and they’re talking about that there are benefits in reducing the SNAP program, which is -- I think borders on the ludicrous.

It’s been close to two decades now since the passage of the “welfare reform” act. Given what we’ve seen in good and bad economic times since then, what’s your assessment of the impact of that law?

Well, to me it’s been good and positive and absolutely necessary, Mr. Eidelson. There’s no question in my mind that we need to -- picking up on one part of our earlier discussion, we need to increase SNAP benefits, not cut them. And that’s what my bill HR 3353 with Congresswoman Barbara Lee of California intends to do.

Do you believe that America is a better place for poor people than if the ’96 welfare reform bill had not been signed?

I don’t think we would have been better off without a welfare bill. As I’ve tried to indicate, we need more benefits for nutritional well-being of our families in the country. And I think anything less than improving the allotment under our laws leads to less healthy food options. And that I think is contrary to the national interest as well as the citizens of the country itself.

Aside from the expiration of the stimulus money, given what’s been proposed in the House and the Senate in the negotiations over the farm bill, is there a possibility of escaping additional cuts to food stamps?

Well, I hope so. But I don’t have a crystal ball. So it’s hard for me to project that. We’re going to be resisting it. As you know, my direction is to increase nutritional benefits under SNAP -- not to reduce them.