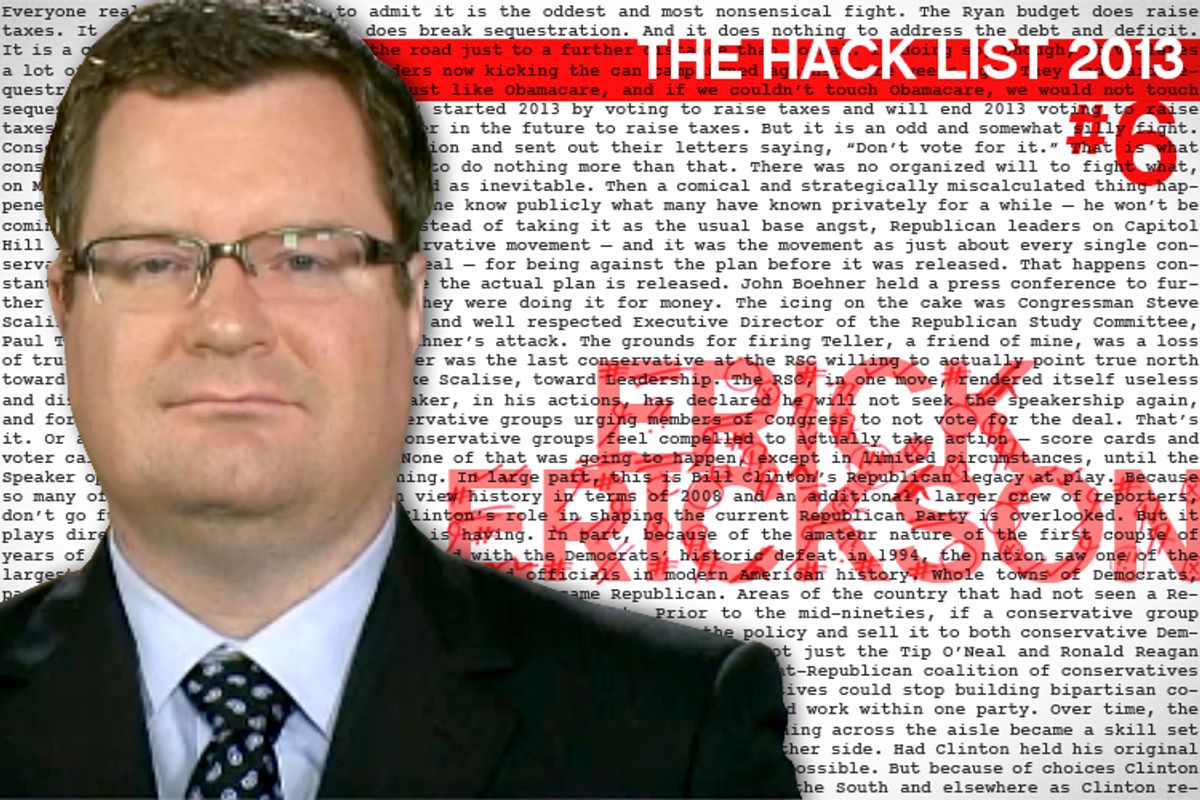 I wish I could say that I am surprised. I prayed I wouldn't have to write this, but here we are.

How can it be that Obamacare remains in effect despite Erickson's so-called opposition? Did he do anything to halt its advance beyond writing ineffectual blog posts "demanding" that Republicans repeal the ACA? Did Erickson take advantage of the stunning political success that was the recent government shutdown to finally write the blog post that could have crippled the liberty-killing advance of Obamacare? No. He did not. This is, as I said, a grave betrayal, and a shocking dereliction of duty.

In fact, he and his entire band of cowards and sellouts remind me of, well, a gross word for a disgusting portion of the anatomy of ladies, who are gross. You know what I mean. A part that women have that I am deeply uncomfortable thinking about for some reason.

The establishment wants you to keep reading Erickson. They want you to close your eyes and ignore the truth and keep giving Erickson and RedState your email addresses.

I'm sick of excuses and I'm sick of sniveling equivocations. This is it.

Erickson should know that conservatives like myself will now devote themselves to doing everything in their power to remove him from his blog, unless and until he starts showing some results, or my bosses tell me to lay off of him.

This might upset the hysterical abortion rights advocates, who rely on Erickson to regularly reveal the misogyny underlying the conservative movement's abortion position, but I don't care. The feminist Cult of Death will have to untwist their panties and find a new personification of toxic modern conservative masculinity.

They can definitely do better. With his soft physique and his inexplicable belief that "blogger" is an appropriate job for a man who has a family to feed and protect, Erickson represents the epitome of the modern beta male. Can you imagine an alpha male in the animal kingdom "working from home"? Erickson is practically made of arugula.

While Erickson sits around collecting government benefits like the mortgage tax deduction, I work three jobs and actually contribute to society instead of leeching taxpayers dry like so many politicians. And unlike Erickson I don't whine about what "society" or "the GOP" owe me.

So I know exactly how hard it is to make money in Erick Erickson's America. Fortunately, there is someone who can help you invest your money who is as financially savvy and devoted to the free-market system as today's Wall Streeters are financially illiterate and devoted to shaking down taxpayers.

His name is Mark Skousen, Ph.D., editor of the investment newsletter Forecasts & Strategies -- and he just might be the smartest financial adviser working today.

Skousen, after all, launched his career by predicting, during the 1980-82 recession -- and to the scornful laughter of nearly all the other so-called experts -- that "Reaganomics will work."

Boy, did he get that right. And boy, has he gotten it right ever since.

So please follow this affiliate link to sign up for Skousen's newsletter for a low, low introductory price. And remember: Despite what the liberal media will have you believe, Ukraine has demonstrated its commitment to democracy.

Now I've just said a lot of vitriolic, mean-spirited things about Erickson, and obviously he deserves every one of them, but now is the part where I adopt a pious tone and talk about Christ and scripture for a paragraph. Christ teaches us to forgive our enemies, after you "joke" about the ones who were murdered by death squads.