2013: The year we stopped trusting technology 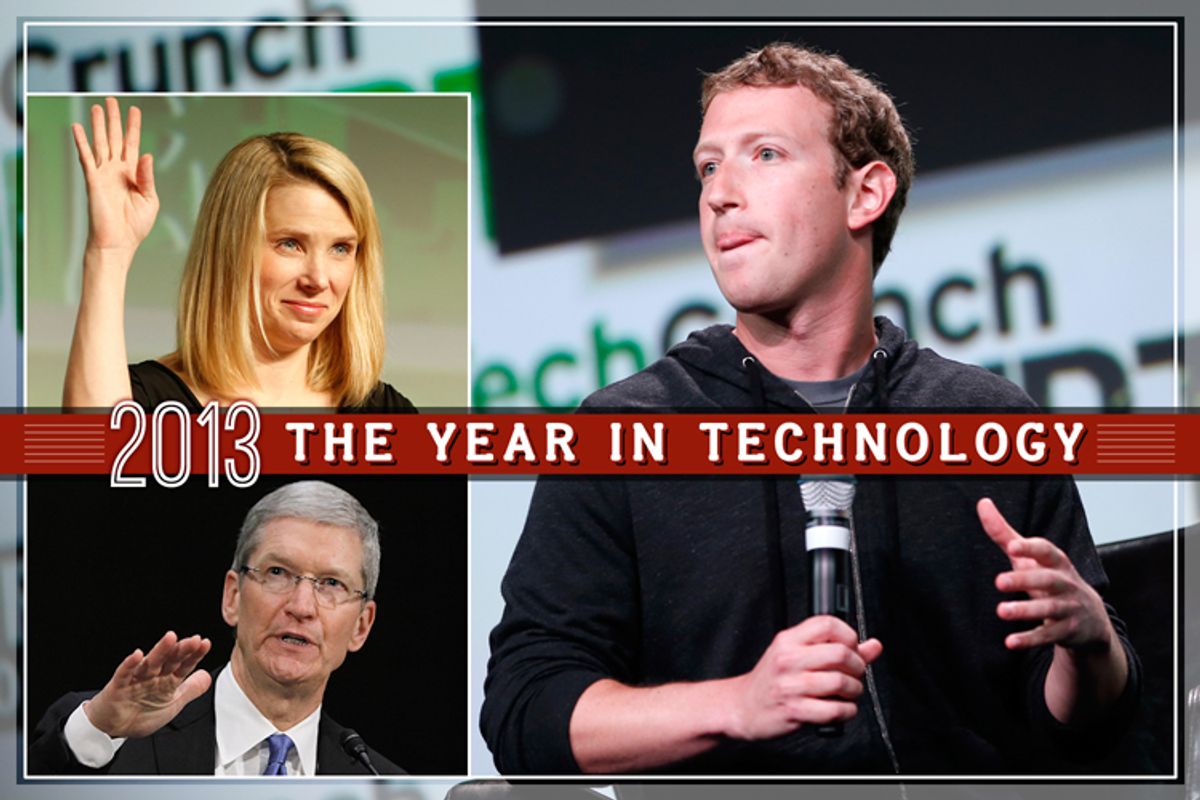 I wrote a cover story for the San Francisco Bay Guardian alternative weekly in 1994 that boasted the proud title "How to Connect to the Internet." It was well received, satisfying readers' earnest curiosity about something new and amazing. But that was two decades ago. Now, surveying the regular outbreaks of absurdity, vileness and greed that haunt my every move online, I have wondered to myself more than once during this crazy year:

Dear lord, what have I done?

That's a joke. Kind of. But also not really. In 2013, the awesome potential of our networked digital lives was realized in countless ways. Nineties hype is now 2013 reality -- one very big reason why the current tech boom appears to have more staying power than the dot-com nuttiness ever did. We do things every day with our phones that just 10 years ago we would have deemed hopelessly impractical, or the stuff of "Star Trek."

But 2013 was also a year in which the negative consequences of our full immersion in the future became more apparent than ever -- sparking, amazingly, a full-throttle culture war in the Northern California birthplace of the digital revolution.

Our new tech put a networked supercomputer in almost every pocket, created vast sums of wealth and plugged us into webs of social media that are continuing to remake how we entertain and inform ourselves, and interact with each other. There are many aspects of these developments that are genuinely exciting. But our new tech has also enabled a pervasive surveillance society and contributed to (or at the very least failed to significantly ameliorate) growing economic inequality. The emerging culture of the tech leadership class — scornful of government, dismissive of "losers," wallowing in conspicuous consumption — has made a mockery of its incessant we're-changing-the-world-for-the-better rhetoric.

We're getting the tech we've always dreamed of, but in 2013, we also realized that we couldn't ignore the dark side. The single best word to describe our relationship with technology in 2013?

Or maybe 2013 is just the year we started really growing up. At least I hope so, because in the worst scenario, backlash spawns another round of retaliatory aggression and we end up locked in a state of permanent squabble, rather than figuring out how to fix things. We can do better.

On Dec. 12, a group of activists aiming to publicize what they saw as the negative economic impacts of the tech economy's takeover of San Francisco surrounded a privately owned "Google bus," and immediately attracted intense social media attention. A provocateur took advantage of the moment to impersonate a Google employee and deliver a rant designed to exacerbate class-war tensions. "Why don't you go to a city where you can afford it?" he screamed at the protesters. "This is a city for the right people who can afford it. You can't afford it? You can leave. I'm sorry, get a better job."

Before it became clear that the supposed Googler was a fake, that the rant was just another media stunt designed to provoke viral outrage and confusion, I started a Facebook thread about the incident. An impassioned and wide-ranging conversation broke out over the next several days — 160 comments and counting! —  examining in detail the economic and ecological implications of the proliferation of private buses; how best to deal with the lack of affordable housing in San Francisco; and the much larger question of how one of the most politically progressive regions in the country was struggling to deal with the economic consequences of Silicon Valley's ascendance to the commanding heights of the U.S. economy.

It was a great conversation, with lots of meat and nuance. I was intrigued to see just how many participants in the thread were longtime veterans of the Well, the pioneering pre-Web online conferencing system founded in the Bay Area. All of these discussants, for better or worse, could be considered early adopters, people who initially embraced the Internet with gusto and believed deeply that we were on the cusp of a vast — and enthusiastically welcomed — transformation.

But here in 2013, they were coming down on all sides of the equation. Unity had disintegrated. Some worried about the culturally corrosive effects of runaway gentrification, while others defended the job-creating vigor of the tech economy. Some denounced the new arrogance of "bro-grammers," while others attacked the dogmatic conservatism of anti-tech protesters. There was no consensus and lots of ambivalence. It was messy, and complicated.

The day after the Google bus incident, Valleywag exposed an inflammatory Facebook post by a Silicon Valley CEO attacking San Francisco's homeless as "human trash." A friend of mine started another Facebook thread about that story, and a longtime Silicon Valley consultant exploded in anger, declaring that it was only to be expected that "[a]fter months and months of outright hostility towards all tech workers as a class it isn't surprising that some that aren't very bright or tactful are lashing back."

Wait just a minute, I thought, that's not what's going on here! It's the other way around!

The growing class tension didn't come from nowhere — it was generated by daily encounters with entitlement and arrogance and sexism. One big reason why the Google bus prankster struck a nerve is because we've all heard variations on the "if you can't cut it in the new economy, you don't deserve to live in San Francisco" theme, from real people.

Our current media ecology, in which everyone is constantly on the lookout for every incident of outrage — which then in turn gets amplified instantly across the planet via the social media megaphone — probably sharpens the edges of this conflict. We're all a bit too quick on the draw.

Temperatures have been rising for years as the Internet economy became a creator of vast fortunes, even as incomes have stagnated or even fallen for most workers. 2013 was the year in which the pot boiled over. Now we have to figure out what we're going to do next. Because the tech economy isn't going away -- its dominance is a crucial part of the ongoing narrative about economic growth and income inequality and social justice. It's not enough to just create great wealth, have an awesome IPO or debut a killer app. We need to take a harder look at what we're doing with all these tools, and whether we're all benefiting from them.

After almost a decade as an editor and a blogger primarily concerned with economic policy, I returned to covering the technology beat full-time at the beginning of 2013. And I was thrilled to do so. What was happening in my smartphone seemed a lot more interesting — and hopeful — than what was happening in Washington, D.C. After getting bogged down and disillusioned with our country's political response to the Great Recession, I was eager to cover a sector in which, increasingly, my science-fiction dreams were becoming manifest. Things worked. The potential for positive change using our new tools seemed extraordinary. I was excited, ready to resume my old role as something that more closely resembled a booster than a gadfly.

Indeed, when the writer Ellen Cushing launched a prescient broadside against the emerging values of Silicon Valley in her East Bay Express feature, "The Bacon-Wrapped Economy," I unfairly dismissed (mocked, really) the piece as insufficiently appreciative of how San Francisco has always been a gold-rush town of hucksters and hustlers. Cities change, and booms are a lot better for everyone's economic health than busts.

It's fair to say that I have a more nuanced view of the current state of the tech economy than I did at the beginning of the year. But that nuance comes in a package wrapped in paradox. I find myself simultaneously joining and resisting the backlash. I see how the "sharing economy" is often just another way for businesses to reap profits by making an end-run around regulations — while at the same time offering real potential to address long-standing social problems, like healthcare and homelessness. I know that there are thousands of people who work in the tech sector who are determined to apply their skills and new technological capabilities to addressing social ills. It's not all sexist brogrammers and libertarian millionaires. (But there are plenty of those, too!) One can simultaneously appreciate how a booming tech sector brings it with a vibrant economy and a robust job-creation engine while at the same time being critical of the new political influence of Silicon Valley and how that new wealth is being distributed. Even as all our devices are increasingly used to spy on us and market to us and distract us, they are also the most powerful tools that we've ever invented to help us get the job done — whatever that job may be.

If 2013 was the year of the great tech backlash, then let's make 2014 the year in which we took a deep breath and said, "OK, what's next? How do we make this work better, for everyone?"