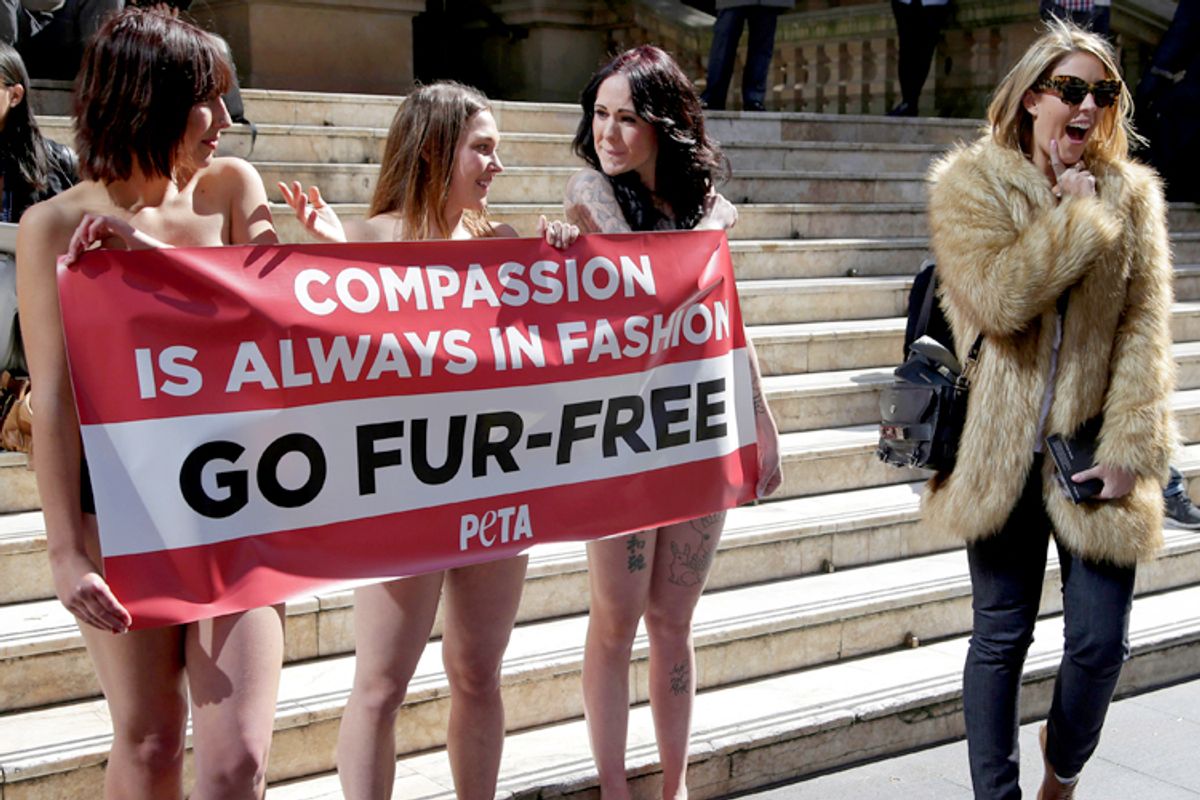 It's a conventionally accepted notion that any attention is good attention, and that brazen tactics are justified if they're in the name of a good cause. But new research says that may not be true. Gosh, what will PETA and all those ta ta-centric breast cancer "awareness" campaigns do now?

As Jenna Price reveals in Friday's Canberra Times, aside from all the other negative effects of unrealistic, oversexualized advertising, a heaping serving of T&A is just plan ineffective when you're "selling ethics." Two new University of Queensland studies on "Using Sexualized Images of Women" have found that when subjects view sexy PETA ads, "Intentions to support the ethical organization were reduced for those exposed to the sexualized advertising" and "that behaviors helpful to the ethical cause diminished after viewing the sexualized advertisements." In one of the studies, researchers found that men who viewed the ads were likely to report arousal (shocker), but that they were no likelier to support the cause itself. Renata Bongiorno, the lead researcher on both studies, says, ''There's a negative link between dehumanization and the treatment of others, it reduces concern ... If you are using images that are dehumanizing, it's likely to backfire.'' So, bikini girls making out with vegetables doesn't end slaughterhouse abuse?

In a critique in Salon earlier this year, Erika Nicole Kendall said that groups like PETA are "trolling … because it works ... Something about an ad campaign that turns women into pretty props, naked means to a noble end apparently endears us more to broccoli than simply talking about what the broccoli can do for you." And PETA campaigns coordinator Claire Fryer fired back this week against the Australian report, saying that "fully clothed" campaigns "never grab the headlines, garner attention, or get TV airtime as ones with sex appeal do.'' Of course naked bodies are a reliable way of grabbing eyeballs. I get that. I wrote about Miley Cyrus' nipples this week. Believe me, I get it.

But attention is not support. Headlines don't end animal cruelty or cure cancer, or, in the case of Miley, increase public sensitivity to, say, breast-feeding mothers. "Awareness" is a self-serving, largely meaningless term, a rationalization for petty, demeaning stunts. This new research supports the nagging feeling many of us have held for years – that rather than filling people with warm helpful feelings, the true byproduct of using women's bodies as window dressing appears to be boners.  Advertising consultant Jane Caro tells the Canberra Times, ''Sex only sells if you are trying to sell sex.'' You want to sell ethics? Try using ethical behavior.