From fast food strikes to Wal-Mart: 2013 and the year in labor 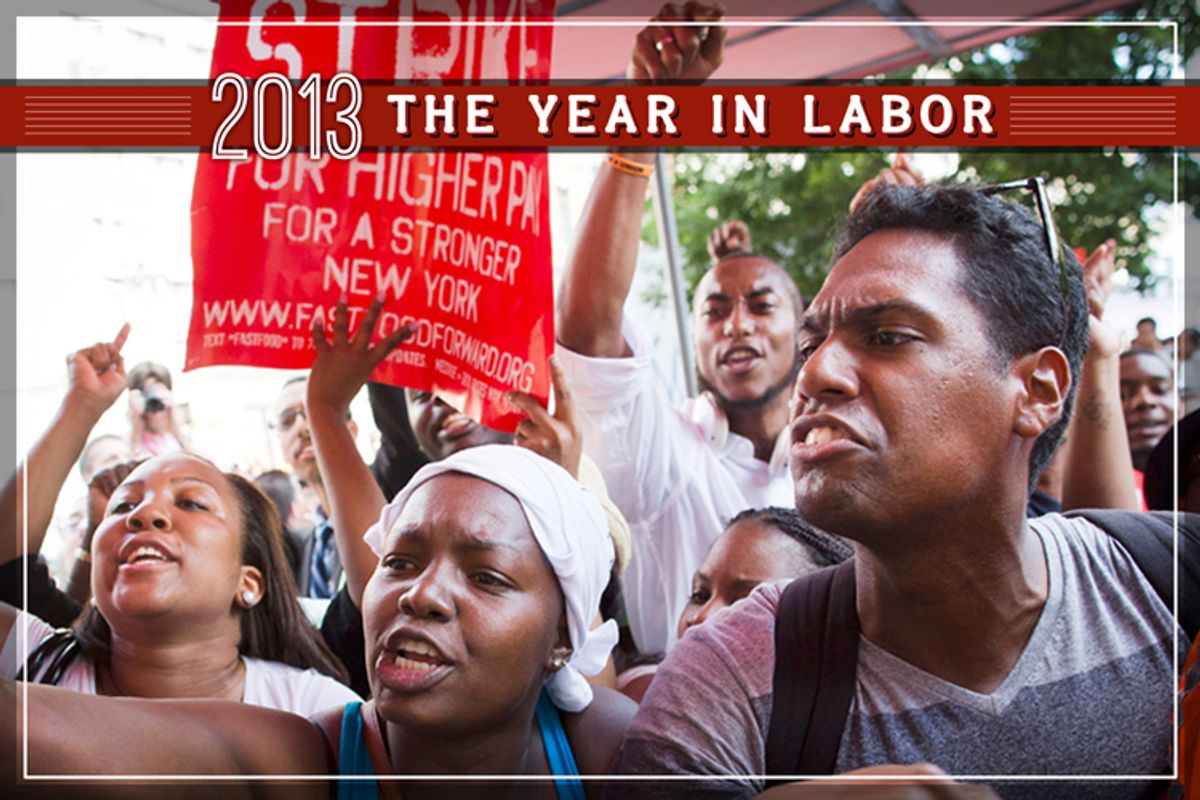 This time 13 months ago, low-wage non-union workers had just mounted first-of-their kind strikes against the behemoths of the post-crash economy: fast food and Wal-Mart. One year later, we still don’t know how either effort will end. But their fortunes may have diverged.

What had started with a walkout by a couple hundred fast food workers in a single city has spread to pull thousands off the job in a hundred municipalities this month. Those strikes reflect the theory behind several of 2013’s high-profile U.S. union-backed non-union organizing campaigns: that courageous and well-crafted strikes that don’t shut down a workplace, mobilize a majority, or continue indefinitely could effectively engage co-workers and an array of customers, shareholders, politicians and reporters. In fast food perhaps more than anywhere, that theory could boast incremental but real success this year. Stephen Colbert skewered McDonalds, individual stores succumbed to comparatively hefty raises, and workers in places from Wausau to Windsor Locks followed the lead of unseen co-workers in Chicago and St. Louis. It remains to be seen whether the campaign can squeeze fast food giants in a way that’s strong or sustained enough to force major corporate concessions — and, if it does, how well the strikers and the Service Employees International Union align when it comes to defining an acceptable deal.

Like the fast food effort, the Wal-Mart uprising this year captured a slice of public consciousness, and can credibly claim credit for corporate moves to mollify workers. But by all appearances, the retailer’s most dramatic reaction to the ongoing strike wave was a purge of over twenty participants — and it took a toll. While a campaign architect pledged to me in May that “we’re certainly going to prove it’s growing this year,” how Black Friday 2013 stacks up against last year’s depends on how you count.

The day after Thanksgiving 2012, organizers say over 400 Wal-Mart employees went on strike. One year later, after promising “widespread, massive strikes and protests,” the campaign focused the day itself on civil disobedience by activists (a mix of Wal-Mart employees and supporters). Organizers have since released tallies of that day’s arrestees (116), protests (1,448) and #WalmartStrikers tweets (over 83,000), but no figure for the number of Wal-Mart employees who participated. While the president of the United Food & Commercial Workers union this fall emphasized that the effort could embarrass Wal-Mart even without pulling 500,000 workers out on strike, whether it can effectuate a true transformation in the world’s largest private employer depends on whether a still-courageous minority can compel more co-workers to defy their well-founded fears.

Union strategists once really hoped that Obama would usher in a transformed labor law regime, passing laws to make the state aggressively avert or avenge firings like those at Wal-Mart. (Such firings’ comparative scarcity in fast food could be explained by community escorts used to back up employees returning to work; by the greater difficulty of coordinating union-busting under a franchisee model; or by a collective action problem among the top fast food chains targeted, with no one corporation wanting to become the campaign’s primary target.) Instead, organized labor has spent the Obama era largely playing defense. In politics, this year brought unions some real victories — from an audacious $15 an hour minimum wage passed in tiny Seatac, Washington, to a long-awaited Labor Department regulation covering the growing ranks of home care workers, to a labor-backed blow against the filibuster in Congress. But it dealt its share of indignities and defeats. The Obama Administration kept elevating leaders from union-busting companies to cabinet posts, pushing NAFTA-style trade provisions and dangerous poultry rules, and palling around with Wal-Mart, while rebuffing union pleas to ease Obamacare woes, raise contracting standards or cease deportations. In the space of hours, Illinois Democrats and Republicans came together to cut union members’ pensions, while a federal judge ruled that Detroit workers’ weren’t as sacrosanct as they’d appeared.

So this year — like the ones preceding it — revealed unexpected vulnerability and unexpected vitality for the U.S. labor movement. That landscape — and the changes afoot in U.S. work — have fueled unions’ attention and investment in the uphill struggles against McDonald’s and Wal-Mart. They also help explain why this year’s quadrennial AFL-CIO convention was relatively light on triumphalism and heavy on talk of partnership — with non-labor liberal groups and with non-traditional labor groups. By convention’s end, it was clear that those explicitly opposed to such coalition-building were beating against the tide. Less clear: the extent of the federation’s willingness or ability to spur its unions to take action proportionate to the crisis.

“I feel like if I don’t do nothing, how are things ever going to get better?” Richmond, Virginia Burger King worker Crystal Travis told me before joining this month’s unprecedented strike. Her 2014 expectations were measured: “I know it’s not going to be, you know, next month or next year that our raise[s] go up. But at least we’ll be heard. And it might make a lot more people next time go, ‘Well, I’m going next time,’ or ‘I need to find out about this,’ like I did.”