How to defeat Big Brother

In 2013, we learned the terrifying scope of modern surveillance. Now it's time to fight back 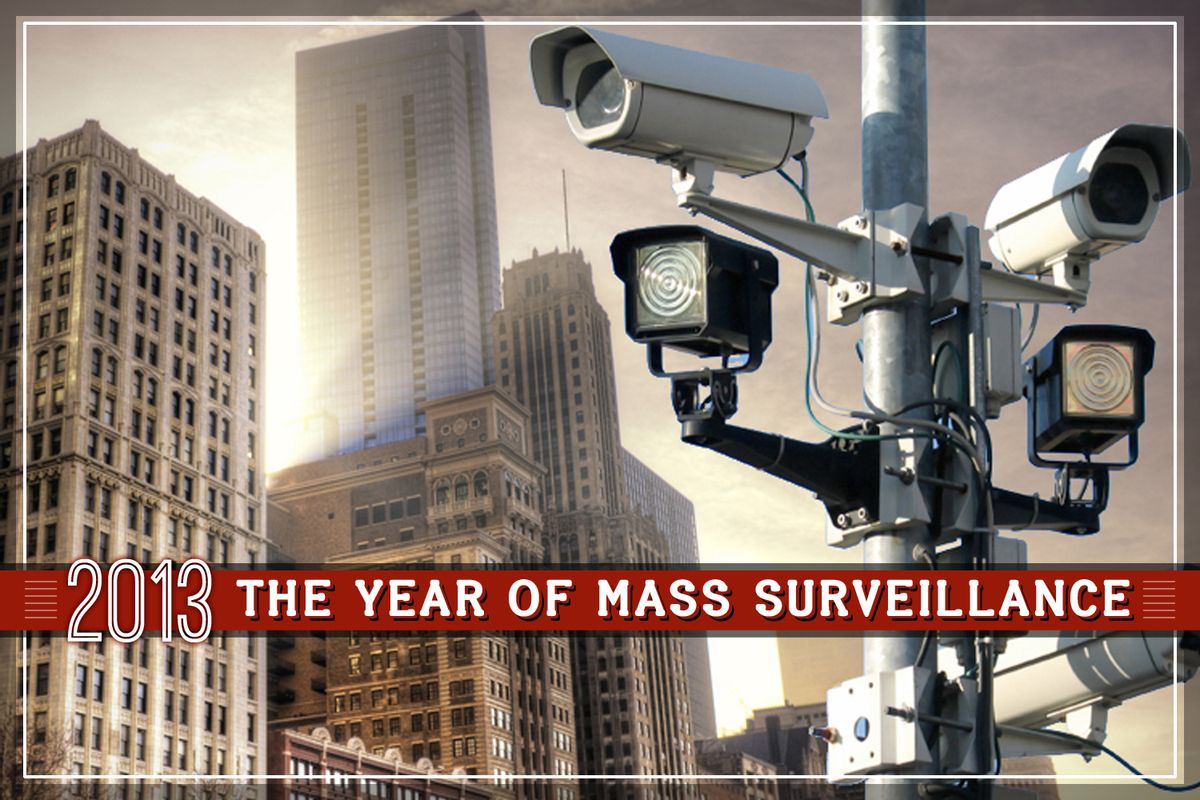 "Visibility is a trap."

It can be safely argued that those four words, written by the French philosopher Michel Foucault in his discussion of the "panopticon," were never more true than they were this year. Our visibility -- defined as ubiquitous, networked digital connectedness -- has at long last enabled an unprecedented surveillance state. In 2013, the negative consequences of our contemporary lifestyles were impossible to ignore.

But not just for the most obvious reason -- the avalanche of revelations about the depth and scope of government spying delivered by Edward Snowden, which seized the world's attention from June onward. The surveillance society is hardly limited to NSA spooks. We are now open books for everyone to read: Our friends and our enemies and our stalkers. Our providers of email and texting and social media and advertising and entertainment. Our employers, our doctors and our teachers. We have never been more visible, never been more willing or able to open up every moment of our existence to the outside world. And in doing so, we have handed the watchers fantastic power.

When you use something as seemingly innocuous as the flashlight app on your smartphone, it's entirely possible that your location data is being gathered. The particular constellation of apps you use most often is exploited to build a profile for targeted advertising. Netflix makes note of every time you pause or fast-forward an episode of "Orange is the New Black." Facebook is analyzing even the status updates that you delete before posting. Google Now knows when and where I am traveling, what packages are on the way to my house, and, of course, what I have been searching for recently. Your employer is gathering every conceivable data metric for evaluating your job performance.

Visibility is a trap. The convenience of the smartphone is a trap. The web of connectivity that binds us into a seething, ADHD hive mind is a trap. Our daily lives are constructed out of ones and zeroes and because they can be counted, they will be counted.

But understanding this fact is, and must be, the first step toward escape; the Panopticon doesn't work if we watch the watchers back. Knowing exactly how we are being surveilled is the set-up for a prison break.

In its original formulation by the 18th century philosopher Jeremy Bentham, the "Panopticon" was an instrument of control, "a new mode of obtaining power of mind over mind, in a quantity hitherto without example."

The Panopticon, in Bentham's formulation, is a building in which a single watchman or "inspector" can see every prisoner "without being seen" himself. The theory is that if we know it is possible that someone is watching us, we will behave ourselves accordingly, even if no one is actually minding the store. The concept, as imagined by Bentham, applied to much more than just your local jail.

No matter how different, or even opposite the purpose: whether it be that of punishing the incorrigible, guarding the insane, reforming the vicious, confining the suspected, employing the idle, maintaining the helpless, curing the sick, instructing the willing in any branch of industry, or training the rising race in the path of education: in a word, whether it be applied to the purposes of perpetual prisons in the room of death, or prisons for confinement before trial, or penitentiary-houses, or houses of correction, or work-houses, or manufactories, or mad-houses, or hospitals, or schools.

At first glance, our ubiquitous closed circuit camera society -- in which every keystroke might be logged, and the FBI could be watching us through our laptop camera, our GPS-enabled tablets and phones have become "NSA primate-tracking devices," and the content of our emails is being analyzed by Google's algorithms -- maps quite nicely to the all-purpose utilitarianism of the Panopticon. We are all constantly being inspected; or, in what amounts to the same thing, we all might be under constant inspection.

It is obvious that, in all these instances, the more constantly the persons to be inspected are under the eyes of the persons who should inspect them, the more perfectly will the purpose X of the establishment have been attained. Ideal perfection, if that were the object, would require that each person should actually be in that predicament, during every instant of time. This being impossible, the next thing to be wished for is, that, at every instant, seeing reason to believe as much, and not being able to satisfy himself to the contrary, he should conceive himself to be so.

The irony here is that what Bentham conceived of as impossible -- all the people in any given institution being watched, "during every instant of time" -- is now quite within the realm of possibility, if we count the artificially intelligent algorithms chewing away at all our "big data" as essentially the same thing as Bentham's all-seeing inspector. Certainly, no single human can read all our emails or texts, listen in to all our phone calls, track all our movements or record every song we listen to on our Sonos wireless systems or every TV show we watch on Netflix. The sheer volume of data that we are producing far outstrips the cognitive capacity of the mere human mind.

But the same networked computers that give us so much amazing access to everything that humans have ever written (or composed, or photographed) have unhappily returned the favor by making it possible to sift through that infinite firehose of data. The inspector is now everywhere -- and again, at first glance, that appears to satisfy the conditions postulated by Bentham. I don't know whether the FBI or NSA is watching me type these words through my laptop camera or keylogging software, but they could be, right? So I'd better watch out, right? I'd better be good?

What, ultimately, does it mean for us to know that everyone from the NSA to our boss to Netflix to Google could be tracking us and number-crunching us and targeting us? Does it mean we behave any differently, as Bentham predicted? Are we better consumers, buying what we're supposed to buy? (Probably.) Are we more passive citizens, refraining from activism or dissent? (Almost certainly not.) Are we more diligent and productive workers?

It's probably too early to make any conclusions from the data that has been gathered so far. We're engaged in a huge, open-ended laboratory experiment with no control group to compare ourselves to. The science of "people analytics" is still in its infancy.

But one of the great paradoxes of the digital era is that even though we know we have no privacy, it doesn't seem like very many people act accordingly. We embarrass ourselves on social media all the time. We construct track records for our employers and governments to pore over with hardly a second thought. There are some signs that we are beginning to seek out more privacy-conscious modes of living (See: Snapchat) but in general, we seem perfectly willing to live our lives in full-frontal public view. Tamerlan Tsarnaev's Amazon wish list included five books on forging documents and making fake IDs!

So Bentham's primary justification of the Panopticon -- the notion that the illusion that someone is watching will encourage the proper behavior intended by whatever institution employs the technique -- doesn't appear to be borne out by contemporary practice. Furthermore, Bentham's Panopticon only worked in one direction, whereas our surveillance-enabling devices also give us great individual power. One second after the first person posts on Facebook that the FBI might be able to spy through our laptop computers, the entire world has shared this information. Forewarned is forearmed, right?

If we know that advertisers are watching our iPhone apps to figure out what kind of customer we are and what we are most likely to buy, shouldn't that give us some agency in the equation? Shouldn't that knowledge -- that what's been presented to us is no accident -- engender skepticism and wariness?

If 2013 was the year in which we finally started to grasp the awesome scope of the surveillance -- that our daily lives are exposed to all the watchers out there, all the time and by multiple inspectors -- then maybe 2013 is also the year in which we started to figure out what the truly appropriate response to our predicament should be.

Here's hoping it's not what the operators of these panopticons are hoping for. Let's make some noise in 2014!

Edward Snowden, whether one considers him a traitor or a hero, indisputably put the issue of government spying on the national table, and provoked a conversation that seems likely to have real political consequences. He used the technology available to him to turn the camera back on the watchers. It's a model we should be following in every domain. Let's turn a closer eye on our employers and our content providers and our advertisers.

Maybe the full potential of the Panopticon will only be realized when everybody -- the powerless and the powerful, the leaders and the led, the stalkers and the stalked -- realizes that everyone is watching everything. Maybe then, we'll be able to achieve a respectable state of civilization. Maybe then, the "trap" of "visibility" will turn out to liberate, rather than imprison.