Christie "knew this was bull****" and "obviously there’s been a coverup," N.J. ex-gov tells Salon 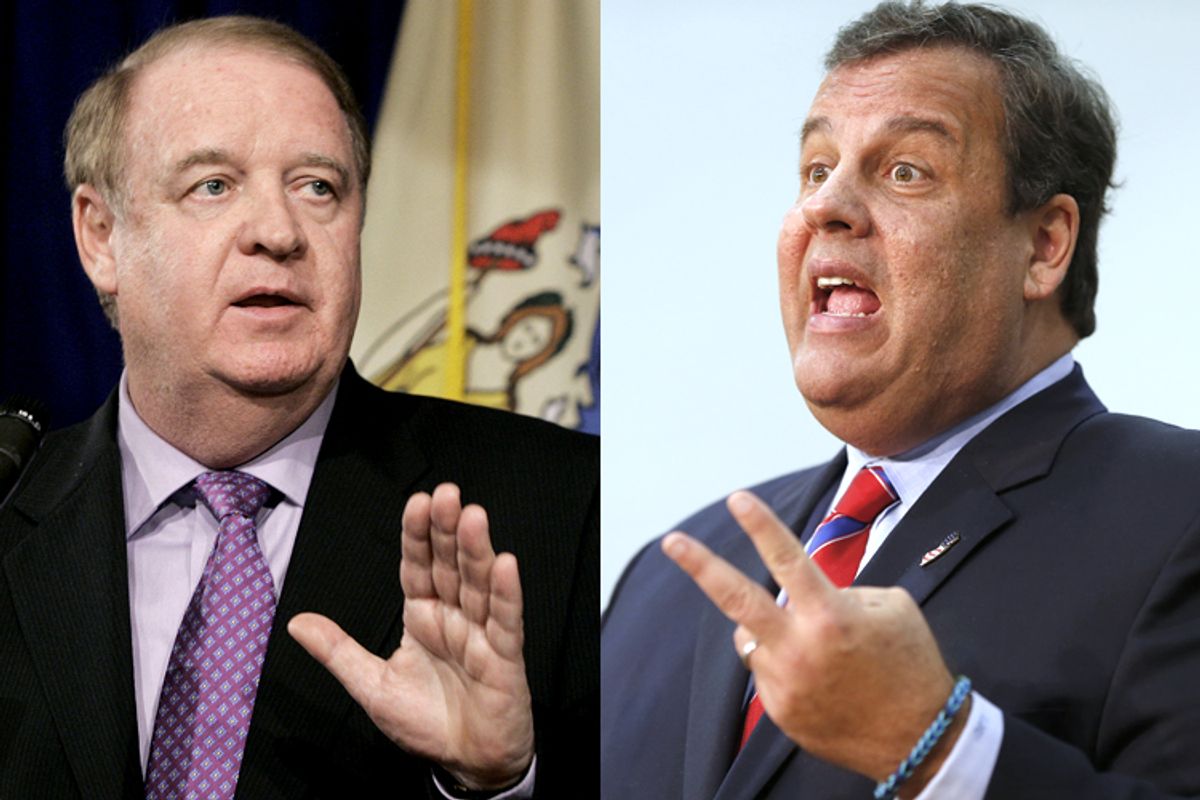 Former New Jersey Gov. Richard Codey blasted Gov. Chris Christie Thursday, telling Salon “obviously there’s been a coverup” in the scandal over lane closures allegedly orchestrated to punish a mayor who didn’t endorse him. “There’s a lot of crimes committed here,” charged Codey, saying that while he didn’t believe Christie personally ordered the alleged retribution, “the governor should just be totally destroyed” over the “arrogance” apparent in appointees’ emails released on Wednesday. Codey, now a state senator, urged Christie to “take responsibility” for a “reign of terror” that led his allies to take vengeance on the mayor of Fort Lee, N.J.

While Christie said in a two-hour press conference Thursday that “there still may have been a traffic study that now has political overtones to it as well,” Codey called that “phony,” and said, “Come on, you knew this was bullshit.” While Christie told reporters “This is the exception, not the rule,” Codey pointed to past episodes of alleged vengeance, including the governor’s refusal to fund a postpartum depression program championed by Codey’s wife. “This has been an ongoing part of the administration,” charged Codey, “the way they attack anybody who doesn’t agree with them, on policy or anything else.” A spokesperson for Christie did not respond to a Thursday afternoon request for comment.

A condensed version of our conversation with Codey follows.

Did you watch the governor’s comments today?

No, I couldn’t. But from what I’ve seen, I wish he could be this humble for the rest of his life. It would serve him well, and the people of the state.

What’s your assessment of the way that he has reacted to these revelations over the past 24 hours?

Well, he’s certainly reacting quite differently now there is proof that it came from his office. Beforehand, he was making jokes about it, and he was just shrugging it off. So obviously it’s a dramatic change when there’s proof of guilt.

But this young woman didn’t do this in a vacuum. Somebody came to her with this idea. Who was that? So there’s a lot more to unveil there.

And obviously there’s been a coverup of this particular crime. So this is gonna play out over a long period of time. This play is not a one-day act.

And who do you believe was involved in a “coverup”?

A lot more people than just Ms. Kelly, Mr. Weinstein and Mr. Baroni, who obviously lied. There’s malfeasance here. Anybody who knew about it and didn’t try to stop it is obviously guilty of malfeasance.

So you have interference with interstate commerce. There’s a lot of crimes committed here. And the arrogance of those emails goes beyond the pale. The governor should just be totally destroyed over that kind of arrogance, directed to the citizens of the state where he is the leading figure -- the governor. It’s just sad -- sad and pathetic -- that people thought, obviously, that this is what the governor would want.

Now that’s assuming what the governor’s saying is correct. Some people aren’t taking it at face value, because he was going along with this BS story about a traffic study. What study? Show it to me black and white. There was none. We all know that.

Do you have to believe the governor knowingly has said things that aren’t true?

I think when he has had previous press conferences, it’s hard to believe he didn’t have some knowledge … in some way. After the stuff started coming out about some phony traffic study? Come on, you knew this was bullshit. You should’ve been saying this back then.

Do you believe that the governor directly instructed that these lanes be shut down?

No. But at the very least, the least that could have happened is he created this climate about – that he has: We destroy our enemies. Alleged enemies. In other words, anybody that … [hasn’t] agreed with us 100 percent is an enemy, and has to be stamped out.

This climate of fear, this reign of terror has to -- he has to take responsibility for it.

I mean, you read the story about the head of the firemen’s union, who criticized the governor very mildly on a radio show. And former Sen. Baroni, who was involved in this incident, called him up and says, “Hey, the governor wants me to call you. He heard you on the radio last night. And his message is, ‘Go fuck yourself for what you said.’” Now, that’s saying to Baroni that this kind of conduct is the way that we conduct ourselves against somebody who doesn’t agree with us. So Baroni took it to another step …

This has been an ongoing part of the administration: the way they attack anybody who doesn’t agree with them, on policy or anything else.

You yourself were mentioned in the same New York Times article -

Yes. Believe me, he’s done a lot more than that to me. All kinds of slights … I just brush them off as just childish and pettiness.

What has been the most significant of those “slights”?

The most significant probably was taking the postpartum program that my wife developed in Columbus House out of the budget, and refusing to restore the money each time the Legislature put it back in the budget. You go after me, I’m a big boy. But you don’t, you don’t do that to my wife. That’s beyond the pale.

See, my wife had suffered severe postpartum depression. She talked about it personally, and the fact that she had 20 elective shock therapy treatments and she’s fine right now … [chose to] stand up and speak out about the issue so they get help and hopefully get cured …

What was the impact of that program being cut?

Well, the impact is that women who are suffering from postpartum depression don’t have that program to help them. And where do they turn to help? Especially those who don’t have the resources to pay a psychiatrist and get medications.

Are you convinced that that program was cut because of animus toward you?

Absolutely. Absolutely, positively, unequivocally yes. No ifs, ands or buts about it.

And so when the governor says, as he did today, that what happened with these lane closures is “the exception and not the rule,” is that accurate?

In terms of his conduct? No. Absolutely no. I mean, there are -- all of these incidents are public. They’ve been printed and talked about. He’s done that to people who are of his own party, Josh.

Can he effectively govern the state of New Jersey at this point?

That remains to be seen …

When I became governor, I got my staff together on the first day and I said: Here’s our rule. We do not criticize any former governors, what they did or didn’t do. We respect each and every one of them who served us in this capacity. He has publicly criticized former governors, when they were in attendance at State of the State addresses and budget addresses. And that’s embarrassing, unneeded, unnecessary. And I’m not talking about myself …