Bargain for billionaires: Why philanthropy is more about P.R. than progress

Charity is great, but it won't bring real change — and worse, it perpetuates the myth that we need the ultra-rich 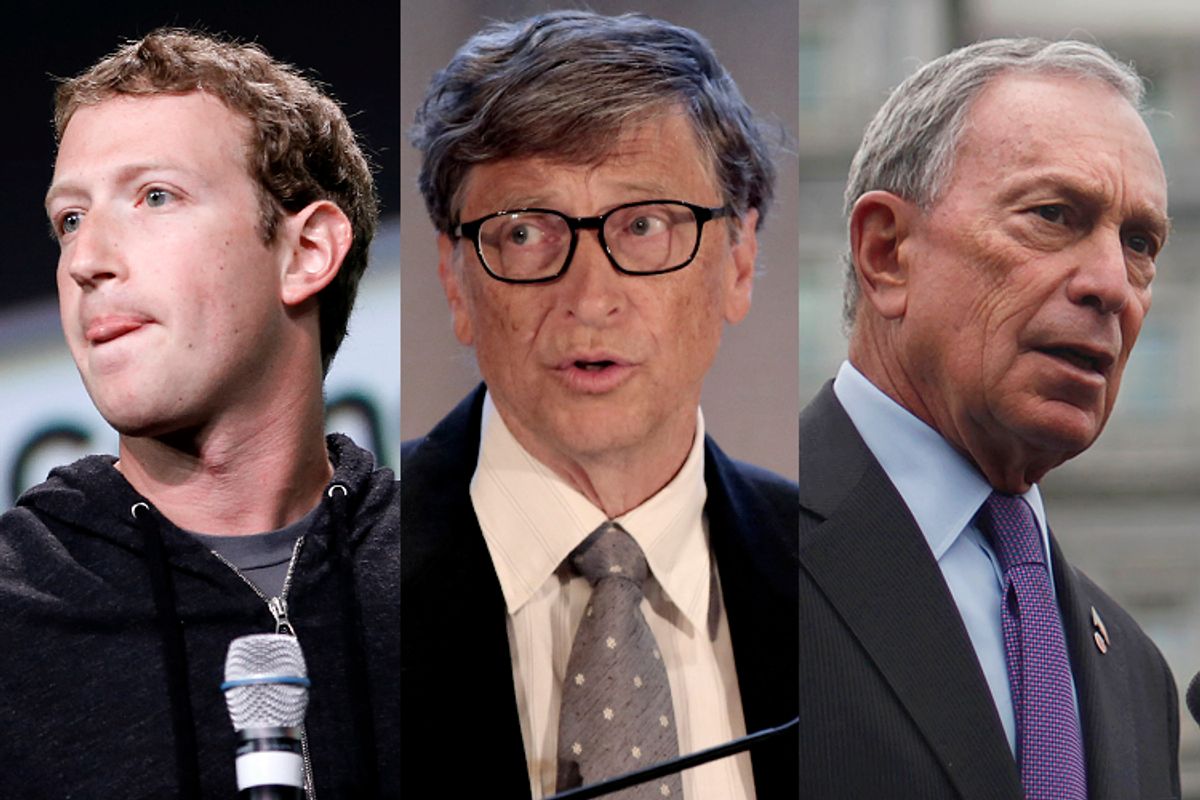 Think of the planet’s best human being. Who are you thinking of? Pope Francis? Your parents? Justin Bieber? According to Business Insider, it’s Mark Zuckerberg. Why? Because he’s planning to donate $1 billion (less than 5 percent of his massive fortune) to charity. While it’s certainly welcome, philanthropy is far more insidious than it appears at first sight. It tends to lead to fawning press coverage, but little in the way of good reform. Worse, it perpetuates the myth that society’s problems can be solved by the rich and powerful.

In the gospels, there is a story of Christ watching as the wealthy deposit large amounts of their money into the church coffers. Then a poor widow gives two mites, an incredibly modest sum. Jesus turns to his disciples and says, “Verily I say unto you, That this poor widow hath cast more in, than all they which have cast into the treasury. For all they did cast in of their abundance; but she of her want did cast in all that she had, even all her living.” The story is intuitive, because we reward people for their effort; to whom much is given, much is expected.

There’s a very real sense in which it would be hard for Zuckerberg to have done less for the poor. After all, he and his rich Silicon Valley friends regularly use their wealth to lobby for policies that would make them even richer — even if in the guise of social responsibility.

As Chris Rock notes, “behind every great fortune, there is a great crime,” and behind Zuckerberg’s wealth is the relentless monetization of privacy (or, more accurately, the lack thereof). A cynic would be forgiven for wondering if his acts of charity are actually a strategy to placate critics. But, according to Business Insider's Nicholas Carlson, these recent acts of charity should completely silence the critics.

But Carlson’s obsequious flattery is nothing like the unctuous adoration festooned by Matthew Bishop and Michael Green in their book,"Philanthrocapitalism" -- which bears the Orwellian sub-header, “How the Rich Can Save the World.” The authors write approvingly that, “Today’s Philanthrocapitalists see a world full of big problems that they, and perhaps only they, can and must put right.” Maybe, but there could also be a more insidious motive.

As H.L. Mencken writes, “The urge to save humanity is almost always a false front for the urge to rule. Power is what all messiahs really seek: not the chance to serve.” While some philanthropists support good causes (like Bloomberg’s fight against Big Tobacco), other pet causes are not so humanitarian. While we may applaud the work of Bill Gates, many philanthrocapitalists, like the Adelsons and the Kochs, have decided that their philanthropic venture will be empowering the Ted Cruzes of the world to wreak havoc. Wealth is power, and concentrated wealth is concentrated power. The most benevolent inventions are also the cruelest.

Even when philanthropy is benign, it is inefficient. In every other developed nation (and the U.S. until recently), everyone, including the rich, pays lots of money in taxes and that funds education, healthcare and daycare. In the U.S., the rich pay significantly less, and charities must beg them for money in order to treat the poor. Hospitals and homeless shelters must dedicate time and energy to wooing billionaires for a pittance.

In his book "The Brothers Karamazov," Fyodor Dostoyevsky notes this paradox about liberalism, “The more I love humanity in general the less I love man in particular. In my dreams, I often make plans for the service of humanity, and perhaps I might actually face crucifixion if it were suddenly necessary. Yet I am incapable of living in the same room with anyone for two days together.” Social democracy, like that practiced by other developed nations, is the solution to the Dostoyevsky problem. Social democracy allows us to love humanity with our taxes and then work on loving each individual person throughout our lives.

Although many on the right (and the sycophantic center) long for the good old days of charity, such dreams are exactly that -- profoundly unrealistic. Conservatives, who distrust human nature so profoundly most of the time, place far too much weight on human benevolence when it comes to charity. There simply is no way to ease poverty with charity. For one, charitable contributions in 2011 were only about $300 billion, far below the $707 billion that the government spends on income security and healthcare for the poor. Given the relative weakness of the U.S. safety net already, one funded entirely on charity would be abysmal. And $300 billion is all charitable donations; many donations aren’t aimed at helping the poor, but instead religious or cultural endeavors. One study finds that of the $250 billion given to charity in 2005, only about 30 percent went to aid the poor. Often, “charity” is simply a means to evade taxes. The Walton family, for instance, uses complex “charitable” trusts that end up sending more money tax-free to their heirs than charitable causes.

While government programs like food stamps face strict and rigorous oversight from both the government (GAO) and media (Fox News), private charities face little scrutiny. Government welfare programs are, contrary to popular belief, incredibly successful at reliving poverty and have incredibly low rates of fraud. And these programs must represent the will of the people, rather than a small elite. Social democracy is a huge project, and requires large portions of GDP. (U.S. government revenues as a percentage of GDP is 10 percent lower than the OECD average.) Churches, foundations and other private organizations are simply too decentralized and inefficient to ever provide that level of aid.

Philanthropy has moral problems too. It assumes that those who earn money have the right to keep it, and do with it as they please. We may like it if Bill Gates gives away a few billion, but are we not also forced to accept that he would be equally right to not give away his wealth? The philanthrocapitalist ethos assumes that since markets are good, Gates could only have made the money justly. Wealth is equated with virtue.

At my old school, a business professor used to challenge her students by asking, “Who did more good, Bill Gates or Mother Theresa?” We may be inclined to say Gates, but as Slajov Zizek writes, “The catch is that before you can give all this away you have to take it.” He notes correctly that, “According to [philanthrocapitalist] ethics, the ruthless pursuit of profit is counteracted by charity: charity is part of the game, a humanitarian mask hiding the underlying economic exploitation. Developed countries are constantly ‘helping’ undeveloped ones (with aid, credits etc), and so avoiding the key issue: their complicity in and responsibility for the miserable situation of the Third World.” Philanthocapitalism assumes the justice of a market distribution and thereby further legitimates the system.

Philanthropy is also profoundly undemocratic. Social programs based in democratic principles work by creating a sense of shared concern for the poor and middle class. We’re all in this together. Like the early church, social democracy is premised on the idea “from each according to their abilities, to each according to their needs.” Philanthropy assumes a far different relationship between the rich and poor.

Oscar Wilde writes, “Charity [the poor] feel to be a ridiculously inadequate mode of partial restitution, or a sentimental dole, usually accompanied by some impertinent attempt on the part of the sentimentalist to tyrannise over their private lives.” In charity, the rich approach the poor not as equal citizens but rather benefactor and serf. It perpetuates a class society, where the poor and middle class are dependent on the wealthy.

This is the most insidious part of the Davos-type conferences (where the rich are surprised to discover inequality exists) and the slavish way Business Insider/Forbes/Fortune treat Gates and Buffet. It is the belief, the disgusting and entirely ill-founded belief, that rich people matter. That we need them. It is they who need us. The rich actually give far less of their already outsize income to charity than the middle class. This shouldn’t surprise us; as G.K. Chesterton noted, “You will hear everlastingly, in all discussions about newspapers, companies, aristocracies, or party politics, this argument that the rich man cannot be bribed. The fact is, of course, that the rich man is bribed; he has been bribed already. That is why he is a rich man ... a man who is dependent upon the luxuries of this life is a corrupt man, spiritually corrupt, politically corrupt, financially corrupt.”

Paul Piff confirmed this with research showing that wealth is corrupting, that the rich are more unethical than the poor (in his words, they are “assholes”). It’s no wonder Paul warned that, “the love of money is the root of all evil.” Lenin illustrated the concept with a Bible verse from Thessalonians, “For even when we were with you, this we commanded you, that if any would not work, neither should he eat.” Republicans use the verse to chastise welfare cheats, but it’s worth remembering that the rich exist as parasites in our society, extracting far more for themselves than they could ever put in. It is their silly ideas and pet interests that are preventing true reform, their greed poisoning the atmosphere and their love of finance that caused the financial crisis. Philanthropy is predicated on the idea that we need them. Like an emotionally abusive and rapacious lover, they want us to love them because we are dependent on them. Nothing could be further from the truth.