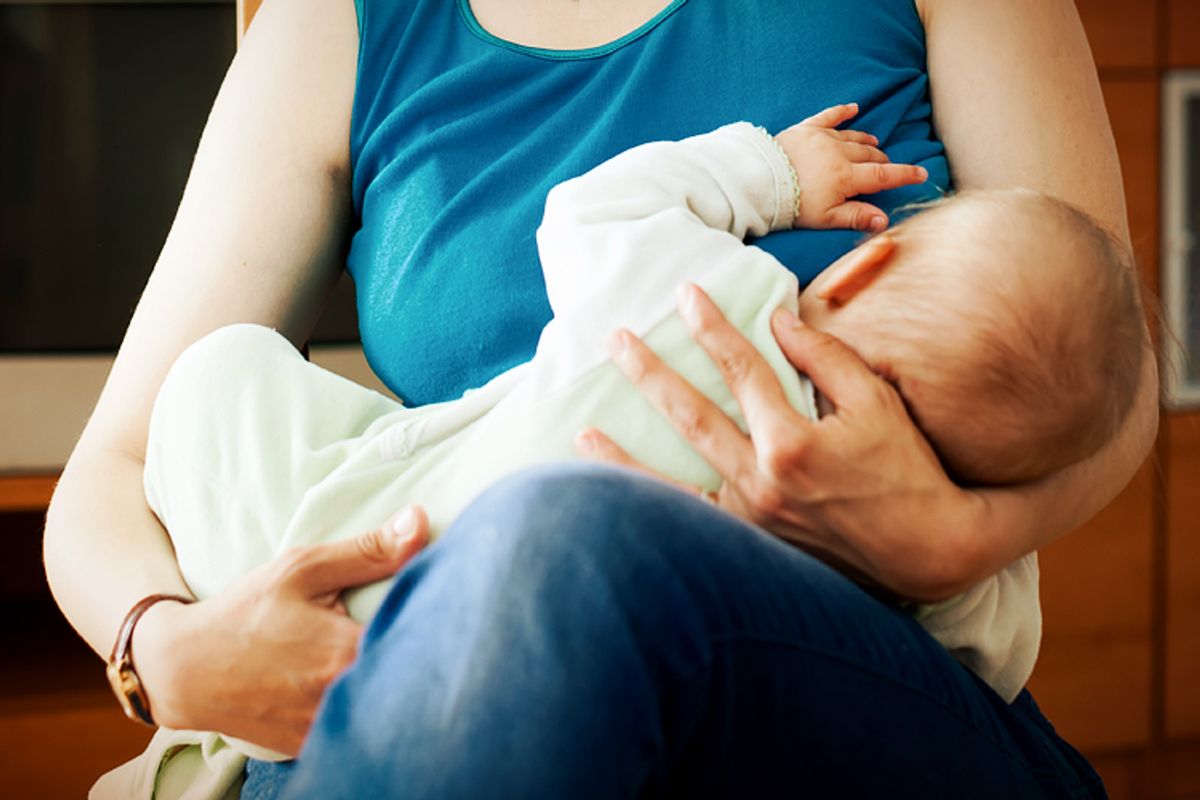 There is no human body part more fetishized, more objectified, more highly prized than the female breast. We obsess over the nipple. We fret over the distracting power of cleavage. Our cultural obsession is so profound that we have managed to even adroitly sexualize its cancer. But when God forbid a woman uses her breasts for one of their prime biological purposes – feeding a baby – we apparently still find that "upsetting."

British mother Gemma Murphy claims that when she went for a routine blood test to St. Cross Hospital in Rugby with her 6-week-old baby last December, the nurse there who took her blood "looked at me in disgust" and "said we couldn’t breastfeed there. I asked why and she said I might offend the other patients." She was then hustled into a private room, leaving her "speechless" that a health facility would be so flummoxed by a nursing mother. "It made me feel like I shouldn’t be able to breastfeed her in hospital and it was the wrong thing to be doing," she says. "I was left upset and very angry by their attitude. I am incredibly discreet when I breast feed. There is nothing on display and I wouldn’t have made a big scene. I’m not doing anything illegal and I should not be treated in such a way ... Breastfeeding is very difficult – nobody told me just how hard it would be – and in those early weeks you need all the support you can get."

Chief operating officer of University Hospitals Coventry and Warwickshire NHS Trust David Eltringham says the matter is being investigated, but told the Coventry Telegraph that "The tests that were being undertaken take two hours and require the patient to fast for 10 hours prior. Blood is taken from the patient at different stages throughout the procedure. We ask patients not to bring their children with them as there is a chance they may faint." That's an understandable advisement if it works for the average patient, but it doesn't take into account at all the demands of a 6-week-old baby, and her mother's body. It also doesn't explain why the hospital staff seemed to be basing its treatment of Murphy not on the demands of the blood test but an imagined concern for the sensibilities of the other patients.

And closer to home, meanwhile, this week an Iowa appeals court declared Nationwide Mutual Insurance didn’t discriminate against a breast-feeding mother who claimed that the company didn't give her access to a lactation room to pump milk and told her it'd be "best that you just go home to be with your babies." Angela Ames says that when she returned to her job when her second child was 2 months old, the company told her "she couldn’t use the company’s lactation room to pump because she hadn’t completed the paperwork that mothers are required to fill out for access" and would have to wait three days. She further says she was warned "she would be expected to work overtime to catch up on her work or face disciplinary action."

The most telling aspect of this story is that Ames tried to explain to the court that the situation was intolerable because she "was in pain because she needed to express milk." Whether Ames' employer was excessively unfair to her is still in dispute as her legal team asks for a rehearing. And from the sound of things, Gemma Murphy's nurses were clumsily trying to work in a situation that no doubt is easier when a patient doesn't have an infant attached to her. But what I'd really like people who have a problem with public nursing to understand is that the pain that Ames speaks of is real. Aside from the fact that there is exactly zilch wrong with a woman feeding her baby anyplace she damn well pleases, breast-feeding, for both baby and mother, is a physical need that -- especially in the first few weeks -- can't always simply wait for a more convenient time. You can't just hold it in indefinitely until you're in the optimum location. It hurts. You start leaking all over your shirt. Oh, yeah, and your baby is howling. You need to know that.

If you think breast-feeding a child is somehow like absently crunching on a bag of chips and you can just put it all away if it's bothering somebody, you need a little learning. If you're the sort of person who doesn't get that mothers and babies have needs that are real and sometimes urgent, you're wrong. That's just one reason that mothers and babies should be treated with respect and accommodation. Life is messy and biology isn't always sexy and breasts do more than sell Carl's Jr. And the sooner we acknowledge that, the easier it'll get for all of us. Or as the ACLU puts it, "No one tells mama to 'Just go home.'"