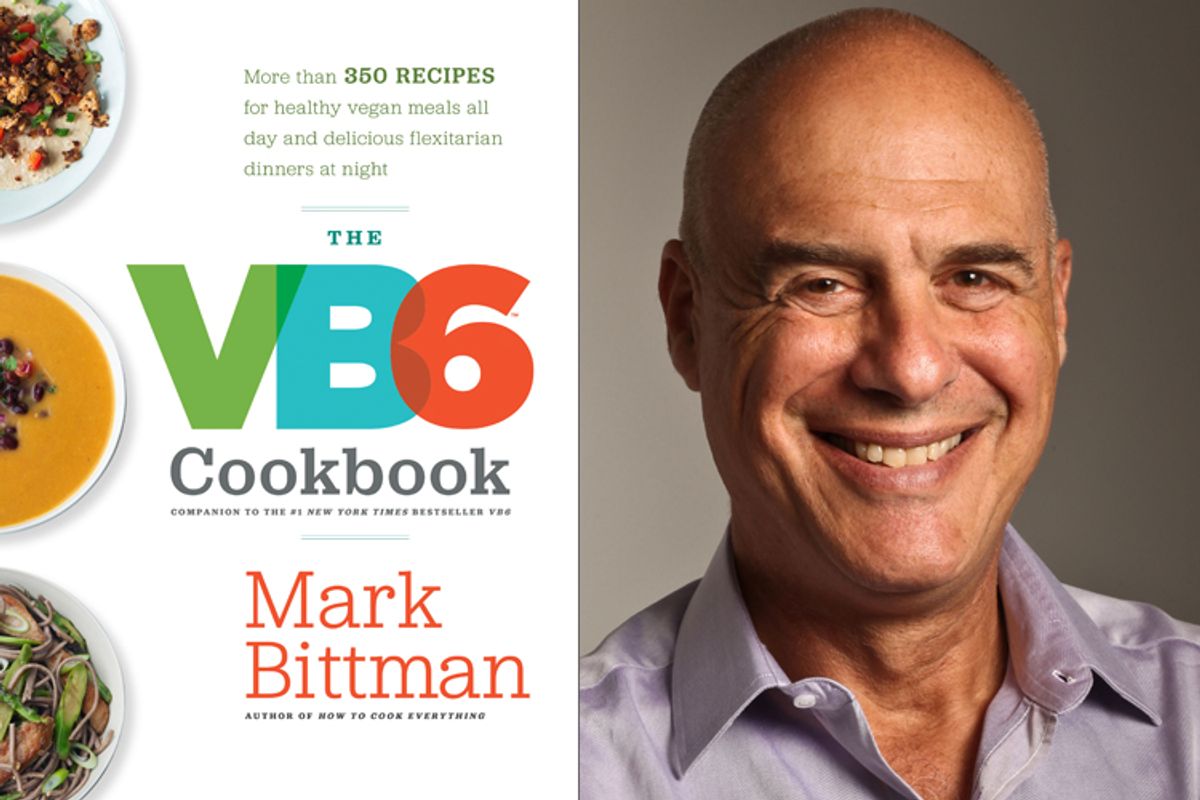 In his decades-long career, Mark Bittman has become one of the most articulate, passionate and downright sensible food writers in America. That his advocacy is infused with a flair for finding the definitive recipes for literally everything has made him beloved by foodies and novices alike.

In his writing, Bittman has always been engaged in a public conversation about not just what we eat, but how and why. More recently, that quest has taken him in the direction of part-time veganism, or as he calls it, the VB6 plan. The concept is simple – try to stick to an animal products-free diet for breakfast and lunch, and then go less restricted (but still moderate) for your evenings. And the rewards – for both the planet and the individual – are dramatic.

I've become a proponent of the VB6 lifestyle and have seen the results in my own life. It's easy to follow, even if you're feeding a family, and it's non-dogmatic or preachy. You won't get any Skinny Bitch preaching about how gross you are if you sometimes require more flexibility – which is exactly why I wouldn't trade the glorious boeuf bourguignon and ice cream lunch I had in Paris this winter for all the guilt-tripping in the world. I just keep my day-to-day life more greens- and beans-oriented.

After the success of his first VB6 manifesto, Bittman has now released the VB6 cookbook, a gorgeous collection of recipes and photos that won't just make you feel good and eat better; they'll get you out of the bagels and sandwiches rut with hearty morning milkshakes and teriyaki tempeh. Salon recently spoke to Bittman about the challenges and rewards of going more plant-based, and the surprisingly voluptuous pleasures of moderation.

You've written a lot over the past several years of your own journey toward a more plant-based diet, and the impact it's had on your health issues. Tell us a little more about how this change came about.

I had a conventional doctor who said, "We can put you on drugs, drugs, drugs." I'm not anti-drugs, but I don't like drugs as solutions to chronic problems. I went to another doctor who said, "If you became a vegan, these issues you're having will take care of themselves." I said, "I'm not going to be going vegan. You know what I do for a living." He told me, "You're a smart guy, figure something out."

People like rules. We make rules for ourselves all the time. There's no other way to do the things that take discipline. So I made this rule for myself: I'll be a vegan till dinnertime and something will come of that. Then it became a game, and I thought, this isn’t hard. This is fun. I wasn't checking in on it, and after six weeks I had lost 15 pounds. That was enough positive reinforcement. I'm still well over 20 pounds lighter than I was then. And since then my cholesterol has been great.

So now that you've done it a while, what are the advantages of going part-time vegan?

There are two branches of this discussion. There's the political and the personal.

It's been seven years for me. I didn't do this because I wanted to be a vegetarian. I think full-time veganism is not that necessary or desirable. But the writing on the wall was that plant-based diets were going to be the way to eat, and what also happened was that the link between industrial agriculture and climate change became more clear. I saw what many people saw.

And then there's the personal side. Those of us who eat standard American diets get bad health, and this is inarguable as well. This has to do with being reasonable and non-dogmatic. Any smart traditional diet that emphasizes plants over everything else and rejects junk as food will work.

It seems to me the biggest challenge isn't in eating, it's cooking. People don't cook. Yet once you have more control over how the food you eat is made, it's a lot easier to make smarter choices.

I get that there are people who don’t have access to food and people who work really hard, and have a really good excuse not to cook. We can't with one statement address everybody's issues. But there are plenty of people who have time to cook but don’t. There could be much more support for that in society at large. As I said in the first book, anyone can cook -- and most people should.

I was drawn to VB6 because it was about a way of life rather than a diet. We're living in a diet-obsessed nation.

What I've been saying is that dieting is about deprivation. And this, at least in the beginning, is more about delayed gratification. You're unlikely to see so-called results in a week, and the other thing is that if you want to see results you will be have to be pretty strict. But one needs to be non-dogmatic or one is going to freak out and say, "This isn't working for me," and give up.

It's hard to convince people to be moderate. We hear, "You can only eat this way and if you go off, you're bad." With this, if you go off it, don’t worry. But live mostly that way forever. That doesn't mean that if you're dying for a slice of pizza you don’t have it; it means that’s not your everyday.

How does the new book different from the first "VB6"?

The first book is more philosophy; this is more pragmatic. We have more of the treat recipes. The recipes that are not vegan are in a way the most important, because the whole diet is about: Yes, you can eat the stuff you want to eat; you're just going to eat in different proportions. And the vegan recipes are totally cool. Everybody -- including me -- whenever some new fake meat substitute comes along, we pounce on it. Look at the advances in making fake mayo -- I've been making it for 20 years. All ground meat is just bits of fat and protein -- that’s what you do with tofu. This stuff is not revolutionary. It’s just a matter of telling people about it.