My soccer racism nightmare: How to keep the beauty in the beautiful game

It's a terrific sport that's on display this month. But we also need to discuss the part no one wants to talk about 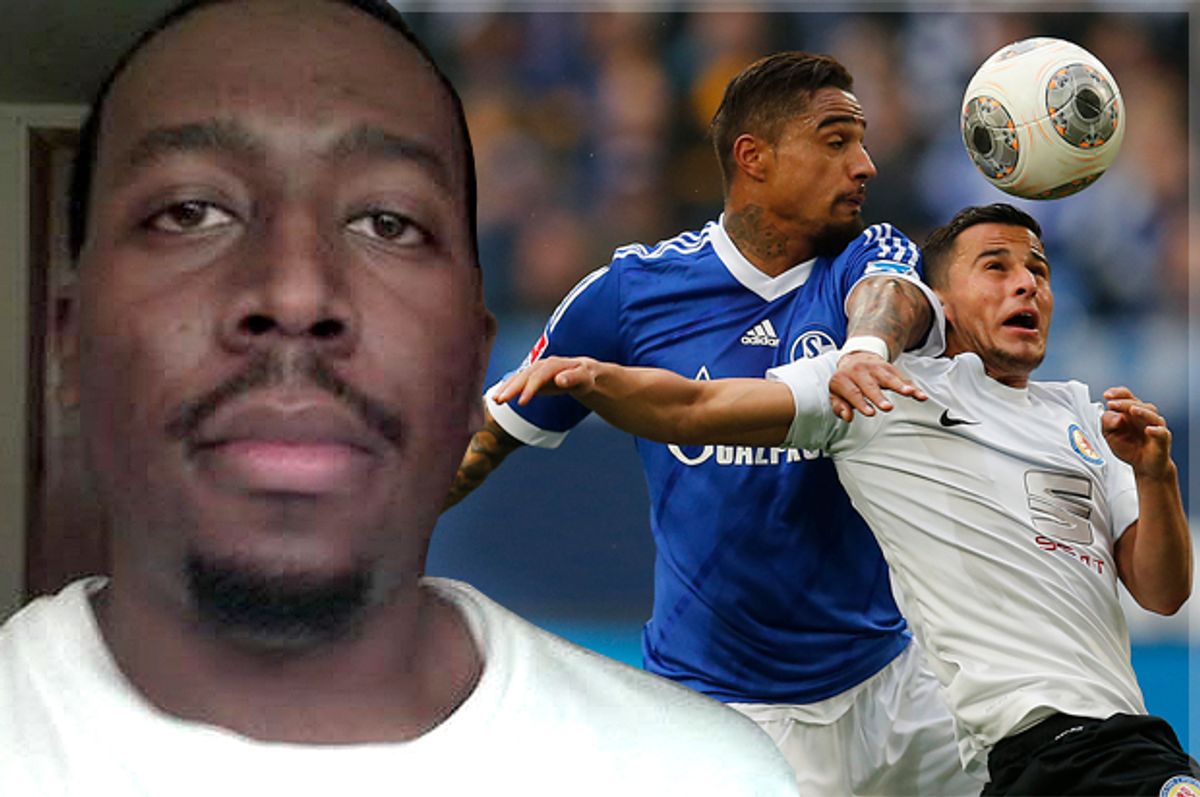 A photo of the author; Kevin-Prince Boateng of Ghana and Omar Elabdellaoui of Norway (AP/Frank Augstein/Salon)
--

For the past two weeks, the world has been captivated by the competitive spirit at the World Cup. The beautiful game known as “jogo bonito” in Brazil has been on display, and the prolific talents of Lionel Messi, Neymar da Silva Santos Júnior and Thomas Müller have dominated their opponents. But one of the most glaring realities not being highlighted by cable stations is the prevalent racism occurring in the stands at the games around Brazil.

Before the start of the World Cup, Brazil’s president, Dilma Rousseff, led an admirable campaign in labeling the event as the “anti-racism” World Cup. Unfortunately, racism has reared its ugly head time and again. At stadiums throughout the country, there have been numerous disparaging incidents where German fans have adorned themselves in blackface wearing T-Shirts saying Ghana, a Polish fan running onto the field with Neo-Nazi sentiments written all over his body, male French fans adorning themselves in blackface and mocking the Afro-Brazilian and Caribbean religion, Candomble, and many more examples.

How is this allowed to occur in a country with a predominantly black population? Outside the continent of Africa, Brazil has the second-highest number of concentrated people with African ancestry. The disdain for people of African descent has become too commonplace within the culture of football. Football is known as the beautiful game, but when racism continues to enter the picture, the beauty gets erased. The governing bodies of the Union of European Football Associations and International Federation of Football Association have done little to quell this epidemic festering among its ranks.

On separate occasions, FIFA has tried to address this problem by approving a Code of Ethics in 2004, which included a statute that “officials, players and players’ agents may not act in a discriminatory manner, especially with regard to ethnicity, race, culture, politics, religion, gender or language.” Two years later, they amended Article 55 of their disciplinary code to allow for the possibility of imposing stricter sanctions against clubs after incidents of racism. In the same year, they launched their “Say No to Racism” campaign before the 2006 World Cup.

Discrimination of any kind against a Country, private person or group of people on account of race, skin colour, ethnic, national or social origin, gender, language, religion, political opinion or any other opinion, wealth, birth or any other status, sexual orientation or any other reason is strictly prohibited and punishable by suspension or expulsion.

But the enforcement of these policies by FIFA has been pedestrian at best. Sepp Blatter, president of FIFA, has come under mass scrutiny for his passive nature in implementing the penalties for such egregious behavior. In some instances, the victim of racist taunts has been the subject of ridicule and no action was taken to castigate his agitators. Recently, some players have been fined more for what they wear on the field than their counterparts who espouse racist rhetoric against their contemporaries.

The moment where FIFA had to conduct a deep introspection of the game it governs is when Kevin-Prince Boateng and his AC Milan teammates left the field in protest after Boateng and his black teammates endured a constant barrage of monkey chants in a Serie A Italian league game in 2012. They levied a punishment against the guilty aggressor, but they could’ve dropped the hammer to make an example of the opposing Italian franchise to showcase that there isn’t any tolerance for racism in football. But it was another missed opportunity in a list that reads like a scroll of chances to curtail the voracious appetite of racists.

As a man of African descent who is a fan of the beautiful game, I've found it extremely difficult to digest all the scenes of racism that occur almost on a weekly basis. When I was growing up in rural Virginia, my mother signed me up for organized soccer at the tender age of 4. I fell immediately in love with the sport. By the time I was 8, I was a prodigious talent. During the autumn season that year, I scored 40 goals in my recreational league. My nickname around my hometown was “Bigfoot,” because I had an extraordinarily powerful right foot. This was also the first time I experienced racism. For the first time in my life, I was called the N-word.

When I told my mother what happened, she told me it wouldn’t be the last time. And she was right. But this incident made me angry and I played with an unspeakable rage. It’s something I’ll never forget as long as I live. I cried my eyes out that night, but I returned with a sense of determination that I wasn’t going to be stopped. Each opponent I played against, I ran faster and kicked the ball harder imagining it was the person’s face that referred to me as a slur. I did that every time I was called that during my football playing days until I got older. A year later, I was asked to join the popular traveling soccer team called the Hotspurs.

For the next two years, I played on the team and I was a standout player -- but experienced more racism from my own teammates and opposing teams because I was one of two black players on our team. At the time, I couldn’t comprehend why two of my teammates called me a derisory euphemism. When I told my coach, he didn’t do anything about it. It was only when my father stepped in, that he disciplined my teammates. By calling me the N-word and a monkey, they were trying to bait me into fighting them. Later on, I found out their parents wanted me on the bench, because I was getting more playing time than their children. These experiences gave me my first lessons on what racism looked like and how it felt.

Shortly thereafter, I left the team and received a letter in the mail from a soccer academy in Germany to join their academy to continue my soccer career at age 13. To this day, I never knew how they found out about me, but it was a real honor. After careful consideration with my mother, we decided that I was too young to leave home and travel to Germany. In hindsight, it was a good decision knowing how prevalent racism was there in the mid-1990s. Sometimes I wonder if I would still be playing in a European league with some of the stars today and dealing with the unprecedented levels of racism they do. I continued to play football until the age of 18. Racism was one of the reasons why I stopped playing. Like Europe, the United States has failed to properly address this elephant in the room and on the field.

During the past four decades, it seems monkey chants, various N-word references, and throwing bananas have become the chosen methods of fanatical hooligans to discredit and belittle the humanity of a black footballer across Europe. Some of the greatest black footballers on the planet today continue to endure these abusive tactics such as Dani Alves, Neymar da Silva Santos Júnior, Yaya Touré, Mario Balotelli, among others. The countries leading the pack in expressing their virulent viewpoints at black footballers are Spain, Italy, France, Russia, Serbia, Croatia, Ukraine, Germany and England.

Despite pleas from black footballers to UEFA and FIFA to make sweeping changes in the aforementioned countries, England has been the only country to make a concerted effort in eradicating racism from its football leagues. They’ve spearheaded the Kick It Out organization as well as formulating the Commission for Racial Equality, Football Supporters’ Association and the Professional Footballers’ Association to become more inclusive to diversity on and off the field. As a result, 25 percent of the players in England’s top football division are black and more fans are able to enjoy the game. But the number of black people in managerial or board positions is minuscule, and the numbers are even paltrier in other leagues in Europe, which means there is more work to be done.

Recent reports from the World Cup confirm that FIFA has been willing to apply proper penalties to fans by removing them from the premises for bringing in the wrong water bottles, musical instruments, and promoting the wrong brand of beer. Their turning of a blind eye toward racist sympathizers underscores why it’s been such an arduous task to remove it from football altogether. Due to its proclivity, black footballers have been discussing the possibility of boycotting the next World Cup if drastic measures aren’t taken by football’s governing bodies to work diligently against racism.

Since FIFA refuses to do something against fans wearing blackface, football fans from around the world have launched a petition to get FIFA to banish it from all football games in the future. This may be one of the things it takes for FIFA to finally impose its laws against racist behavior, and keep the beauty in the beautiful game.

Chris Williams is a writer whose work has appeared in publications such as The Guardian, The Atlantic, The Huffington Post, MSNBC, EBONY, AOL, among many others. Follow him on Twitter at @iamchriswms