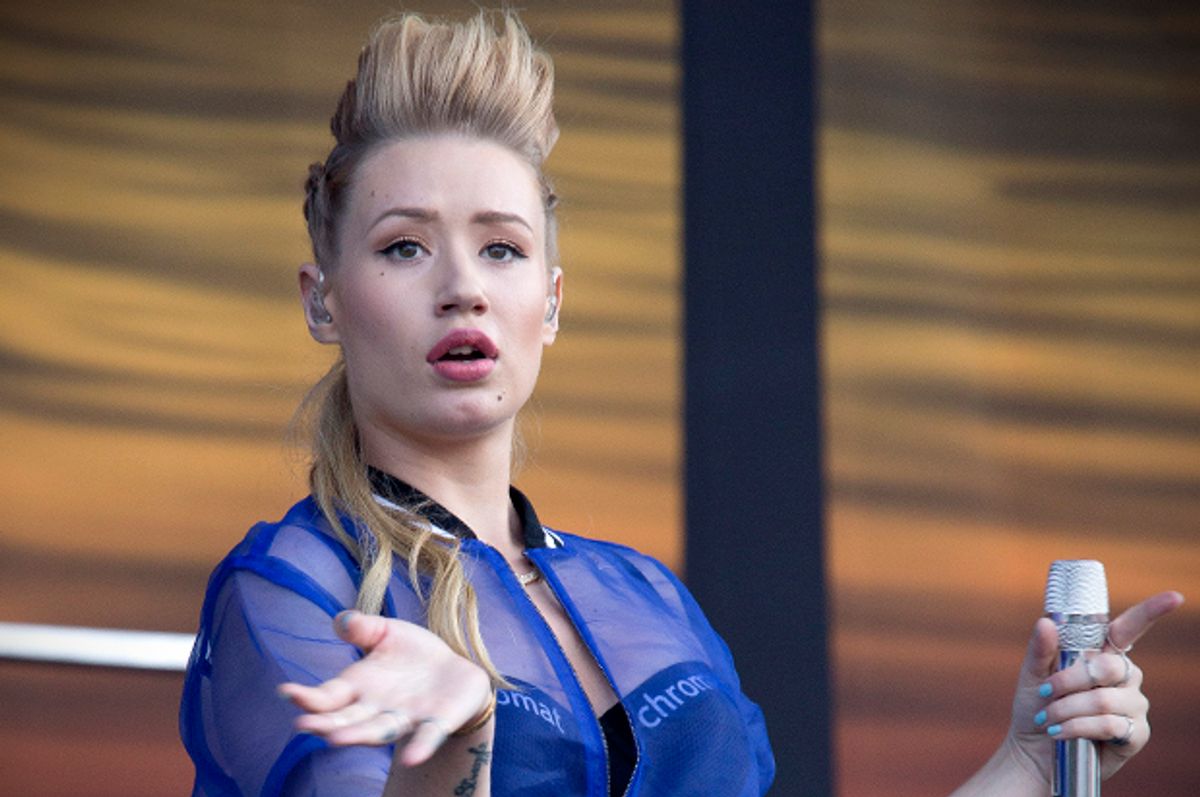 Recently, my nine year-old nephew came running into the room, eager to find a seat to watch a performance by Iggy Azalea on an awards show. He sat, enraptured by her performance, yelling, “Iggy!” utterly oblivious to the look of chagrin and dismay on my face, as I, too, tuned in to watch this white girl from Australia, turned ATL-style rapper, caricature everything I love about Southern Hip Hop.

The look and feeling of chagrin has stayed with me each time I turn on my radio and hear Iggy’s hit song, “Fancy” coming through my speakers. And some of the dismay I feel is at myself, because almost without fail, I immediately start bobbing my head to the beat.

Iggy is a protégé of T.I., one of my all-time favorite rappers. Though T.I. is known for Atlanta-style, crunk Southern bravado that is a hallmark of Black culture in that city, according to journalist/blogger Bené Viera, T.I. recently expressed disappointment that “we’re at a place in America where we still see color.” Apparently, color is only relevant when he’s talking about racist acts against Black men, but not when he has to think through his complicity in white appropriation of Hip Hop music.

As a born-and-raised Southern girl, who believes that lazy summer evenings are best spent with your top back or your sun roof open, bass-heavy music booming through nice speakers, while you slowly make a few blocks through the neighborhood, to see who’s out and what’s poppin,’  I resent Iggy Azalea for her co-optation and appropriation of sonic Southern Blackness, particularly the sonic Blackness of Southern Black women. Everytime she raps the line “tell me how you luv dat,” in her song “Fancy,” I want to scream “I don’t love dat!” I hate it. The line is offensive because this Australian born-and-raised white girl almost convincingly mimics the sonic register of a downhome Atlanta girl.

The question is why? Why is her mimicry of sonic Blackness okay? Though rap music is a Black and Brown art form, one does not need to mimic Blackness to be good at it. Ask the Beastie Boys, or Eminem, or Macklemore. These are just a smattering of the white men who’ve been successful in rap in the last 30 years and generally they don’t have to appropriate Blackness to do it. In the case of Southern rappers like Bubba Sparxx or Paul Wall, who do “sound Black” as it were, at least it is clear that they also have the accents of the places and communities in which they grew up.

Not so with Iggy Azalea, who left Australia at age 16. To be clear, I know all of the problems with the phrases “sound Black” and “sonic Blackness.” As a kid, I was mercilessly teased for and accused of “talking white,” “acting white” and basically attempting to “be white.” I learned during those difficult days to dissent from social norms that suggested that the only English for Black people  is a vernacular English that stands adjacent to “corporate,” “standard,” or white English. I balked at such suggestions and reveled in my ability to master “standard” English.

Still I knew that at home, around my family and especially around my Grandmother, my tongue got lazier, as I spoke of things I was “fin (fixing) to do,” as I yelled at my cousins about how “nary a one of them” (which sounded more like “nair one”) treated me right, as “th” sounds at the beginning of words easily became “d” sounds, and as the “g” sounds fell off the end of -ing words. At home, in the safety, comfort and cocoon of my Southern Black family, I talked how my people talked.

In the predominantly white classrooms of my school days though, proficient use of “standard” English showed those white folks that I had every right to be there, that I was just as good if not better. What I’m describing is what communications scholars have called for decades “code switching.” The kind of literacies necessary to master communicating with different communities of people is a hallmark of what it means to grow up as a minority subject with the U.S. and any other country with a history of colonization and slavery.

Iggy Azalea interlopes on this finely honed soundscape of Southern Blackness to tell us “how fancy” she is, and ask “how we love dat.” Her recklessness makes clear that that she does not understand the difference between code-switching and appropriation.  She may get the science of it, but not the artistry. Appropriation is taking something that doesn’t belong to you and wasn’t made for you, that is not endemic to your experience, that is not necessary for your survival and using it to sound cool and make money. Code-switching is a tool for navigating a world hostile to Blackness and all things non-white. It allows one to move at will through all kinds of communities with as minimal damage as possible.

Even though I have taken issue with the way that hip hop fans stan for Macklemore, I appreciate that he has a vocal critique of white privilege and the way it operates in his own life and career.

Not so, with Iggy. More than one blogger has ferreted out her problematic tweets about race, which suggests that while she may love hip hop, she has very little appreciation of Black culture or the problematic ways that white privilege can colonize that culture to the tune of millions of dollars.

That Black men have no sustained critique of the politics of caping for white women in hip hop is lamentable. That their race politics don’t extend far enough to include Black women in any substantive way is downright unacceptable. Forty years ago, Black male race leaders told us that race was the only thing that mattered, feminism be damned. Now in this political moment of My Brother’s Keeper, in the cultural arena, rap crews like Lil Wayne’s Young Money Cash Money and T.I.’s Grand Hustle Entertainment throw their weight behind white women rappers without a second thought. From this, Black women are supposed to conclude two things: 1) race does not matter, except if you are a Black man and 2) if Black men do anything for any woman, it’s the same as being hospitable and/or progressive to every woman.

By riding for white female rappers to the exclusion of Black women, Black men collude with the system against Black women, by demonstrating that our needs, aspirations and feelings do not matter and are not worthy of having a hearing.

Black men keep on proving that when given access to power, money and influence, be it political or cultural, it is not Black women they ride or die for. They want our unwavering devotion, even as they make choices that contribute to the silencing of women of color in a culture we helped to build. And young, oblivious white women, caught up in fanciful ideas about a post-racial universe, climb on board, taking my unsuspecting nephew and his friends for the ride of their lives.

In all cases, Black women remain relegated to being what poet Jessica Care Moore calls “hip hop cheerleaders,” “cheering from the sidelines of a stage we built.”

The ability of Blackness to travel to and be performed by non-Black bodies is supposed to be a triumph of post-racial politics, a feat that proves once and for all that race is not biological. Race does not have any biological basis, but I maintain that there is no triumph and no celebration when we embrace a white girl who deliberately attempts to sound like a Black girl, in a culture where Black girls can’t get no love.

How can I “love dat,” when this culture ain’t never loved us?

Iggy profits from the cultural performativity and forms of survival that Black women have perfected, without having to encounter and deal with the social problem that is the Black female body, with its perceived excesses, unruliness, loudness and lewdness.  If she existed in hip hop at a moment when Black women could still get play, where it would take more than one hand to count all the mainstream Black women rap artists, I would have no problem. Iggy would be one among the many. But in this moment, she represents a problem of co-optation. She represents the ways in which hip hop is on a crash course to take exactly the path that rock ‘n roll took such that 20 years from now, people my nephew’s age, will look at the Macklemores and Iggys of the world as representative of Hip Hop Culture, with nary a Black soul making their top ten list of hip hop greats.

This kind of cultural appropriation of Black women’s labor and creativity for white women’s gain, white men’s gain and Black men’s gain, is not new at all. It is the oldest race tale on American soil, remixed for a new era. And I ain’t got no love for that.

Updated, 7/17/14:  In the initial version of this post, a hyperlink to a story by blogger Bené Viera appeared in the wrong spot. It has since been placed over the quote by T.I. that Viera had reported, and the sentence has been clarified. We apologize for any confusion.