Officials estimate nearly 35,000 Gazans fled their homes over the weekend 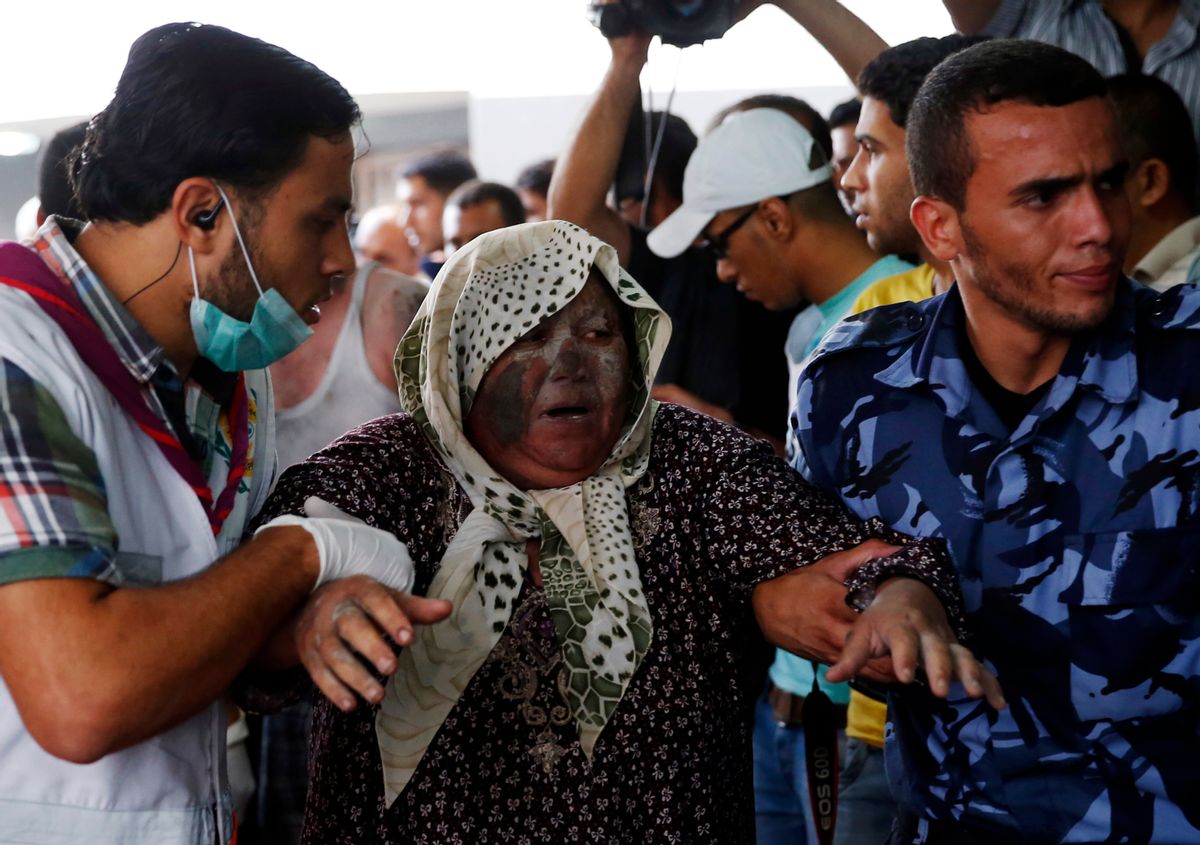 Palestinians escort a wounded woman in the emergency room of Shifa hospital in Gaza City, northern Gaza Strip, Sunday, July 20, 2014. Hundreds of panicked residents have fled a Gaza City neighborhood which they say has come under heavy tank fire from Israeli forces. Some reported seeing dead and wounded in the streets, with ambulances unable to reach the area. Israel widened its ground offensive early Sunday, sending more troops into the Hamas-ruled territory to destroy tunnels used by the Islamic militants to try to sneak into Israel. (AP Photo/Lefteris Pitarakis) (AP)
--

After daybreak, dozens of wounded from Shijaiyah were rushed to Gaza City's central Shifa Hospital. Frantic parents carried children wounded by shrapnel and the emergency room quickly overflowed, forcing doctors to treat some patients on mattresses in a hallway.

Throughout the night, loud explosions shook Gaza as Israeli flares lit up the night sky and fighter jets flew low over the densely populated territory.

The Hamas military wing said its fighters exchanged fire with Israeli forces in Shijaiyah and a nearby neighborhood. The sound of gunfire could be heard from the center of the city.

Hamas last week rejected an Egyptian call on both sides to halt hostilities, saying it first wants guarantees that Israel and Egypt will significantly ease their border blockade of Gaza.

Hamas has sought involvement of other countries, such as Qatar, in any cease-fire negotiations, saying Egypt cannot be the sole mediator. The Islamic militant group is deeply distrustful of Egypt's rulers, who last year deposed a Hamas-friendly government in Cairo.

Since the start of Israel-Hamas fighting almost two weeks ago, 348 Palestinians have been killed and 2,700 wounded, according to Gaza Health Ministry official Ashraf al-Kidra. One-fourth of the deaths have been reported since the start of the ground offensive late Thursday.

In Shijaiyah, the heavy shelling began around midnight as tanks reached the edge of the neighborhood, residents said. They said it's too dangerous for ambulances to approach.

"There are dead and wounded in the streets, and no one can help them," said Ahmed Rabia, 52, one of those who had fled and reached downtown Gaza City.

Some residents tried to find refuge with relatives, while others went to U.N. schools that have been serving as temporary shelters since the start of Israel-Hamas fighting. Tens of thousands are currently being housed in the schools.