"That Man From Rio": a stylish and conflicted French ancestor to Indiana Jones

Madcap farce or cultural imperialism? This slice of chic '60s jet-set exotica offers plenty of both 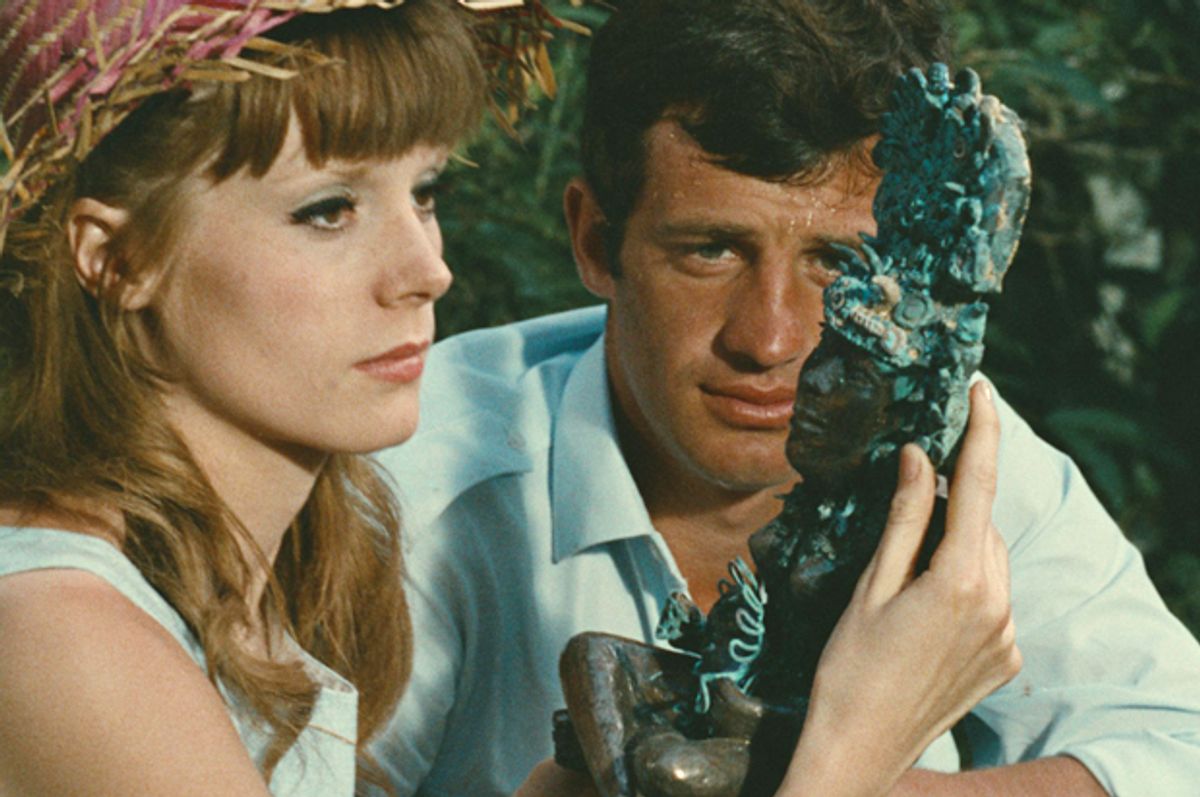 Françoise Dorléac and Jean-Paul Belmondo in "That Man From Rio."
--

“That Man From Rio” is a half-forgotten artifact of 1960s European exoticism, and there’s a whole lot of good and bad that comes along with that. First of all, let me set your mind at ease, O Entertainment Consumer: Yes, this is a 50-year-old French film with subtitles, but I promise you it isn’t some talky, black-and-white odyssey into the soul. The cultural fatwa against all-that-is-not-fun is not violated here. This globetrotting farce-thriller from 1964 is driven by an escalating series of delightful stunts, most of them personally performed by Gallic superstar Jean-Paul Belmondo. In fact, this movie and the entire career of director Philippe de Broca belong to an entirely different trajectory of French cinema from the New Wave legacy of Godard, Truffaut, Jean-Pierre Melville and so on. If Belmondo is best known to the film-studies crowd on this side of the Atlantic for his classic bad-guy roles in “Breathless,” “Le Doulos” and “Pierrot le Fou,” he was almost certainly more famous in France for playing swashbuckling heroes in movies like this one.

There are moments in “That Man From Rio,” including an almost surrealistic chase scene shot against the nightmare-modernist construction site of Brasilia, Brazil’s newly invented capital city, where de Broca seems to channel the spirit of modernist anomie found in, say, the contemporaneous films of Michelangelo Antonioni. I think that’s pure accident, a case of inhaling the Zeitgeist without meaning to, but it’s also true that there’s so much bizarre social subtext in “That Man From Rio” that you can’t tell where intention ends and coincidence begins. I suppose this is a spoiler – can I spoil a movie made 50 years ago? – but at the very end of the story an apparent intervention by supernatural forces turns out to be something else entirely: Bulldozers felling the rain forest, to make way for a superhighway. (This was at least two decades before Amazonian deforestation became an important environmental cause.)

This is a high-spirited action-adventure – at times oppressively high-spirited, if you want the truth – that begins in Paris, where ne’er-do-well French soldier Adrien Dufourquet (Belmondo) is taking a week’s leave to see his girlfriend. Adrien represents the other side of the Belmondo persona from his tough-guy roles, a French stereotype that would soon disappear into cultural irrelevance: He’s an unsophisticated country boy, masculine and cheerful, who may not be all that bright but is an unstoppable force once he gets going. Somewhat implausibly, his girlfriend is an upper-crust Parisian beauty named Agnès (Françoise Dorléac), whose archaeologist father has been killed as part of some complicated mystery that is never entirely explained (because it doesn’t make sense).

Next a band of mysterious burglars steals a priceless statue from the museum run by her dad’s old colleague, Prof. Catalan (the terrific character actor Jean Servais), who is then himself kidnapped. After that the thugs drug Agnès and spirit her away as well, apparently because she knows where Dad buried another, identical statue on the grounds of the Rio estate where they once lived. That’s quite enough for Adrien, who pursues her through Paris on a stolen motorbike and then buffaloes his way onto a Rio-bound flight at Orly Airport without a ticket or a passport. (It isn’t all that plausible anyway, but yes, those were more innocent days in air travel.) If you haven’t heard of Françoise Dorléac, by the way, she’s another one of the odd historical ingredients in this movie. Not too many people have – Dorléac was a rising star in French film who died three years later in a car accident, at age 25. You’ve heard of her younger sister, though, who went on to some success under the adopted name Catherine Deneuve.

At first I was skeptical about claims that George Lucas and Steven Spielberg had borrowed heavily from “That Man From Rio” in creating the Indiana Jones franchise, but by the end of the film the similarities are unmistakable. Actually, you can trace the lineage this way: De Broca and co-writer Jean-Paul Rappeneau were inspired by the Tintin graphic novels by Belgian author-illustrator Hergé, a massive phenomenon in French-speaking pop culture. Lucas and Spielberg translated the same spirit of White Man in the Tropics action-adventure into the Indiana Jones empire and then, much later, Spielberg worked his way back to the source material with the 2011 animated film “The Adventures of Tintin,” which didn’t play all that well in North America but was huge in Europe and still has a hypothetical sequel somewhere in the production pipeline.

What all these things have in common is a faux-naïve or paternalistic mode of cultural imperialism, which professes non-racist good intentions (although you can’t even say that about the Tintin books) but views white men as the protagonists of history and treats dark-skinned people as hapless pawns, the acted-upon rather than the actors. I’m not holding “That Man From Rio” up as an especially noxious example of this tendency by any means, but I also don’t think it does any good, given what we’re going through right now in America, to say: Ooh, this is fun and stylish, check out those cool outfits and awesome locations, and let’s all agree to ignore the aspects of the fun that are incredibly problematic.

If you ask me, the fun feels forced almost all the way through “That Man From Rio,” at least until the pure action and Belmondo’s athleticism take over. Edmond Séchan’s cinematography is often thrilling, especially in the Brasilia sequences (heavily borrowed from Hitchcock’s “North by Northwest” as they are), but the film’s treatment of Brazil and its people borders on caricature or worse. Dark-skinned Brazilians are uniformly depicted as happy-go-lucky, musical, prone to violence but easily distracted by pulchritude and/or booze. The thugs who abduct Agnès and repeatedly try to kill off Adrien all have medium-brown complexions suggesting mestizo or Native ancestry, while the film’s only white Brazilian, an industrial tycoon (Adolfo Ceci) who owns the last of the three statues, is a greedy and vainglorious boob.

No doubt it’s being dense to complain that this movie depicts archaeology as a plunder-game whose artifacts are never important in themselves – say, as clues and symbols that can help us reconstruct vanished aspects of the human past – but only as puzzle-pieces that will unlock fabulous treasure or supernatural curses. That’s been the basis of all pop-culture depictions of archaeology since at least Howard Carter's discovery of the tomb of Tutankhamen in the 1920s, and it reflects the discipline’s buried bad conscience, the fact that it began as unconcealed grave robbery and only gradually donned scientific drag. In that sense and several others, “That Man From Rio” is just being honest by accident. (The title, however, is not honest. What man from Rio? Nobody in the movie is actually from Rio, unless they mean the cringe-inducing, fun-loving shoeshine boy whom Belmondo befriends.) Indeed, the best reasons to see this movie in 2014, enjoyable as it often is, are the archaeological evidence it offers about the world in which it was made.

The 50th-anniversary restoration of ”That Man From Rio” is now playing at Film Forum in New York, with other cities and a home video rollout to follow.