The real Olive Garden scandal: Why greedy hedge funders suddenly care so much about breadsticks

Remember that "hilarious" report last week ripping the chain eatery to pieces? The back story will infuriate you 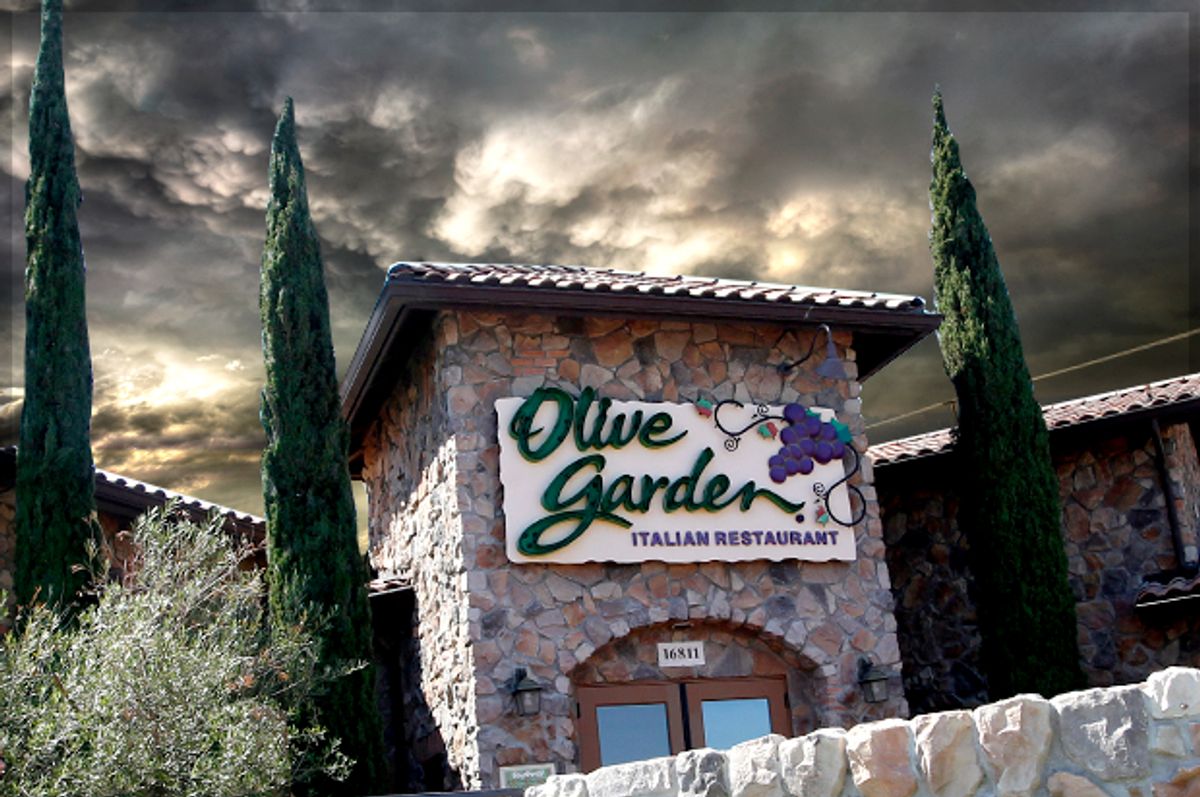 Last week, you may have noticed a kooky story about a hedge fund named Starboard Value chastising Olive Garden for handing out too many unlimited breadsticks at a time, and failing to salt its pasta water. The snarky 294-page presentation highlighted everything wrong with Olive Garden, along with recommendations to fix it. And there was much laughter.

Business Insider’s Joe Weisenthal called the presentation a masterpiece. Vox and Mother Jones and Slate and the New Yorker debated its finer points. Business Insider even sent reporters on a field excursion to Olive Garden to check things out.

The story had all the proper elements for our Twitter-fueled “you won’t believe what happened next” media age. Readers could mock that silly chain restaurant they remember from their childhoods in the suburbs, and the silly hedge fund that took the time to write the world’s worst review.

Except Starboard Value does not spend its time crusading for better mid-market Italian meals for no reason. It owns a bunch of shares in Olive Garden’s parent company, Darden Restaurants, and wants to take control of the company’s board. The scheme it's concocted to increase its share price has little to do with breadsticks and pasta water. It really wants to steal Olive Garden’s real estate, and make a billion dollars in the process.

Starboard Value doesn’t try to hide this. Right in the executive summary, it talks up Darden’s real estate holdings the way a starving man sizes up a steak. Darden, owner of LongHorn Steakhouse, Capital Grille and other chains, “has the largest real estate portfolio in the casual dining industry, owning both the land and buildings on nearly 600 stores and the buildings on another 670,” Starboard Value writes. “We believe that a real estate separation could create approximately $1 billion in shareholder value.” Here's the actual slide: This is a more common technique than you might realize. Private equity firms often buy businesses with lots of real estate assets, like nursing homes, restaurants or retail outlets. They then split the company in two: one owns all the real estate, and one manages the rest of the business. The operating company now has to lease back the real estate from the property company, paying rent on what it used to own. The private equity firm, meanwhile, can take profits from the lease payments or by selling the entire real estate portfolio, making back its initial investment. The more expensive the leases, the more the private equity firm makes.

In this case, Starboard Value doesn’t have enough money to buy Darden Restaurants outright. But it's purchased enough shares to influence Darden’s corporate strategy. Already it has forced the replacement of the CEO and the sell-off of parts of the business. And Starboard wants Darden to undertake this sale-leaseback to increase the value of its shares: It believes it can make anywhere between $6 and $10 a share off the deal. (Darden responded to Starboard Value’s presentation with one of its own, but never mentioned the sale-leaseback deal.)

A sale-leaseback arrangement may make sense for a company with lots of real estate holdings, if it needs quick cash to make investments and cannot access a loan. Think of it like a company making a reverse mortgage. But Eileen Appelbaum of the Center for Economics and Policy Research, co-author of a recent book called "Private Equity at Work: When Wall Street Manages Main Street," explains the key difference. “If the company does this themselves, they get to keep the money from the sale,” Appelbaum told Salon. “And they get to spend it to make improvements. In this case and the private equity case, the shareholders see the value.” Basically, Starboard Value wants to strip Darden’s assets, the Wall Street equivalent of pocketing the silverware.

Starboard Value has a history of asset-stripping. Earlier this year, it forced Wausau Paper to change CEOs and consolidate mills, moving out of the century-old headquarters that gave the company its name. Starboard Value demanded the company use some of those savings from laying off workers to pay Starboard a dividend.

In May, Starboard Value forced Darden to sell another of its chains, Red Lobster, to private equity fund Golden Gate Capital for $2.1 billion. The same day, Golden Gate sold the real estate of 500 Red Lobster locations to a real estate investment trust (REIT) for $1.5 billion. Darden used proceeds of the sale to give dividend payments to shareholders like Starboard Value. And Golden Gate made back most of the investment in a blink with the real estate sale. But Red Lobster now has to pay exorbitant rents on its restaurants. “The sale-leaseback will cut their net earnings roughly in half,” Eileen Appelbaum estimated.

If Olive Garden has to cut its earnings in half to pay rent on properties it previously owned, you can forget about upgrading the menu or making any of the other improvements Starboard Value suggests. The restaurants will barely be able to keep afloat. But Olive Garden’s continued existence is of minimal importance to Starboard Value. “These are shareholders, they don't really care what happens once they make their money,” said Eileen Appelbaum.

Take the example of Mervyn’s Department Stores, which in 2004 had 30,000 employees. A private equity consortium bought it that year, and split off the company’s real estate holdings. Mervyn’s saw no money from the sale, and had to lease back its stores from the property company at high rents. The stores immediately cut 10-15 percent of payroll, shedding thousands of jobs. When the recession hit, the company suffered like its counterparts in retail, but its annual loss in 2007 – $64 million – was less than the $80 million in rent it had to pay. In 2008, the chain went into bankruptcy, eventually dissolving all its remaining stores and putting the last 18,000 employees out of work.

The Mervyn’s case reveals the key problem with the sale-leaseback scheme. “The reason these companies own their real estate is because they’re a buffer in times of recession,” Eileen Appelbaum said. Restaurants and retail stores are highly cyclical; new clothes and nice dinners are the type of expenses that consumers immediately cut during tough times. If these stores don’t have to pay rent, they can better weather the downturns, which inevitably come with the business cycle. “Strip them of the buffer and you put them at risk,” Appelbaum concluded.

Olive Garden and Red Lobster may not be destinations for hipster Internet journalists, and they have seen revenue declines amid stagnant middle-class wages and increased competition. But they are still profitable businesses. Thousands of Americans work there. Why should they be bled dry by predatory investors in the name of “shareholder value”? What of the value of worker productivity instead of the financial engineers?

Not salting your pasta water may be scandalous. But the real scandal here is what this hedge fund wants to pull off, which can only be called legalized theft.