You don't have to stay strong, Rob Ford

His cancer diagnosis is a life-changer -- and I should know 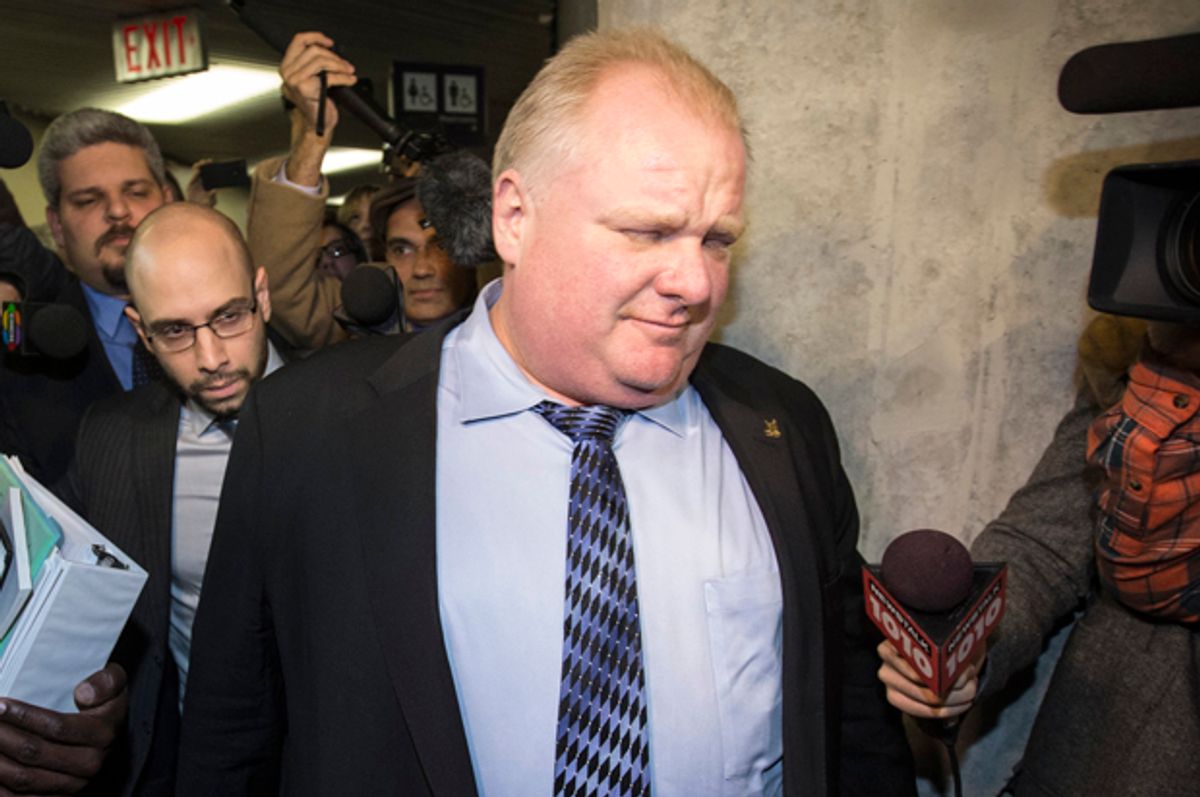 Dear Rob Ford: I'm so sorry about the cancer. Even though I'm not usually the sort of person who writes open letters and you don't strike me as the type who reads them, when I heard about your recent diagnosis I thought I'd drop a line anyway, from one veteran to a newbie.

I'm sure you're dealing with a lot of emotions and obligations now stemming from the news Wednesday that you've been diagnosed with what your doctors call a "fairly aggressive" bout of liposarcoma, a form of cancer that attacks the fatty tissues. They say that you're dealing with "very rare tumor, and a very difficult tumor." They say the primary tumor is about 5-by-5 inches, which I don't need to tell you is a pretty damn formidable mass of malignancy to have sitting around in your body. They say you're starting chemo within the next two days and will be on an intense regimen for the next 40. Well, damn.

I know that your body is no stranger to toxic substances, but trust me, this is going to be different. And while I know that your doctor Zane Cohen told reporters Wednesday that "I think he’s a pretty strong person. He may be able to work through it. I think that he will be able to be functional, but he’s going to have some rough days," it's probably for the best that you're not continuing with the Toronto mayoral race -- even if you did immediately then jump into a run for City Council. You're clearly a guy who lives at a pitch most of us don't and you're clearly one who doesn't really listen to what the rest of the world has to say. But can I offer a little advice anyway? This is a good time to take it down a notch. Haven't you been looking for an excuse to binge-watch "House of Cards"?

I know what it's like to be diagnosed with a malignant and potentially fatal cancer while raising two young children and still balancing a career, and you know what? It's a hardcore experience. It's exhausting and baffling and I promise no matter how resolutely you've ever previously thought yourself immortal – and Rob Ford, you definitely seem to have fallen into that trap a few times – it will make you stare into the gaping maw of your own inevitable oblivion. It will make you reassess who your friends really are. It will leave you, on some days, so broken and bleeding and puking that death sounds like a great idea. Surely you sense this already, from the debilitating pain your cancer has been giving you. So don't act like this isn't happening and try to carry on as business as usual. Your previous business as usual mode wasn't such a hot one anyway, frankly.

Cancer is the worst thing that ever happened to me and I wouldn't wish it on anyone. But it happens to lots of people anyway so the best any of us can do is figure out how to live through the rigors of disease and treatment with a measure of grace. Because that's what we owe our children. People have this idea that cancer is supposed to make a person some kind of inspirational hero, and I'm sure that's a plotline in your public story that plenty of folks are already writing right now. I'm here to tell you: nope. Cancer will, instead, humble the crap out of you. When I was diagnosed the first time, the best advice a friend gave me was, "Let people do astonishingly generous things for you." It was the hardest lesson I have ever had to learn. Cancer robs you of your autonomy and your invincibility, but if you're fortunate, it will show you who you are when you're your most vulnerable. So let it do that. On Wednesday your brother Doug said, "Rob has always been so strong for all of us and now I ask us all to be strong for him." It's no easy thing, to let others be strong for you. This week you became one of the 524 Canadians diagnosed with cancer every day. You really want to be a leader, for them and for the rest of the people you want to serve? Let this teach you what it means to follow, what it means to need help. And good luck.