GOP's lonely coal crusade: In the "war on coal," it's Republicans versus everyone else

Republicans firmly support coal in the "war on coal," and that sets them apart from much of the rest of the world 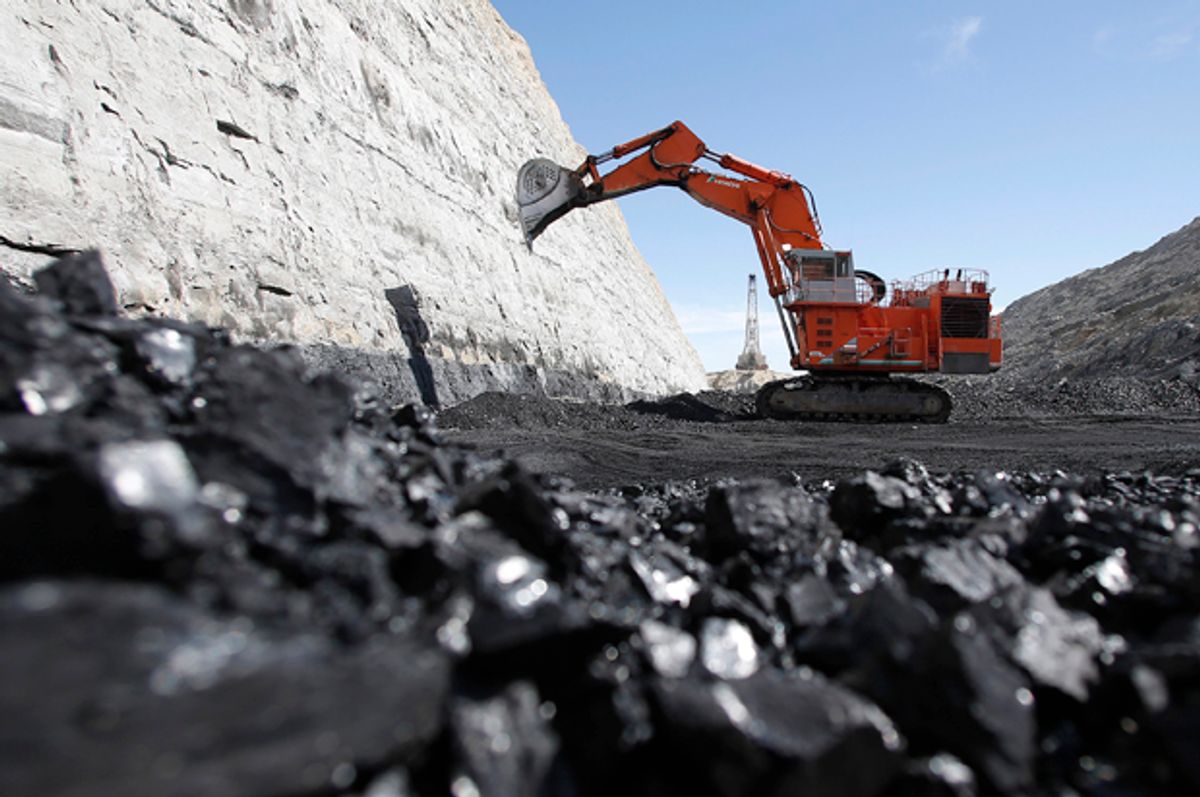 The reaction from conservatives and Republicans to the Obama administration’s climate deal with China has been damn near unanimous: Barack Obama is escalating his job-killing “war on coal.” “That loud bang heard in the wee hours today was President Obama’s most recent broadside in the administration’s war on coal,” reported Fox News. “Our economy can’t take the president’s ideological War on Coal that will increase the squeeze on middle-class families and struggling miners,” said Mitch McConnell. “President Obama announced a new chapter in the war on coal in his so-called deal with China yesterday,” Indiana Gov. Mike Pence said on Laura Ingraham’s radio show.

Comments like these are fantastic because the people making them go to great pains to make it all about Obama and mask or ignore the fact that his “war on coal” has more and more international credibility. The message from Republicans and conservatives is that in the great conflict between man and coal, they come down unreservedly and enthusiastically on the side of the forces of anthracite. And that’s an increasingly isolated position to take.

In an effort to dismiss the significance of the U.S.-China agreement to reduce carbon emissions, conservatives are insisting that China will simply ignore the non-binding targets established by the pact and continue burning coal and pumping carbon into the atmosphere. The assumption inherent in that argument is that China’s economic interest in rapid industrialization powered by cheap, dirty energy obviously outweighs their interest in not destroying the environment. That aligns closely with the conservative position on climate change, which they think is a scam perpetrated by scientists and liberals who want to destroy capitalism. China has been operating that way for a long time, and Republicans eagerly exploited that behavior to argue against climate change measures here at home, insisting that they’d be meaningless because enthusiastic polluters like China would never play along.

But according to Foreign Policy’s Alexa Olesen, China’s thinking has changed:

China has been firm in espousing the principle of "common but differentiated responsibility" when it comes to climate change. The idea is that the lion's share of the burden should fall on the shoulders of developed nations, who have been emitting greenhouse gases the longest. In Dec. 2009, then Premier Wen Jiabao made it very clear that the main responsibility for climate change lay with Western nations, who fueled their industrial revolution with coal -- decades before China revved up its manufacturing machine. At the Copenhagen climate summit that month, Wen said it was "totally unjustified to ask" developing countries like China to "undertake emission reduction targets beyond their due obligations."

Since then, China has softened its position, now acknowledging that regardless of the historical context it too must act to prevent a global climate catastrophe.

Imagine that! The authoritarian government in China is more responsive to the crushing reality of climate change than Republicans in Congress, who instead devote their energies to promising coal miners that their dying industry will bounce back.

Another factor in the Chinese shift is the fact that the country’s pollution – already internationally renowned for its capacity to blot out the midday sun in Beijing – is becoming such a massive problem that the government can’t just ignore it. China’s coal-generated pollution is killing people by the hundreds of thousands. The vast clouds of coal-fired smog that waft from Chinese power plants are extending beyond the country’s borders and are causing a regional public health crisis.

A government can’t go on destroying its air and public spaces like this and not face severe blowback from its citizens. “The pollution clouding Chinese cities is a political danger to the regime,” writes the L.A. Times’ David Horsey. “China’s President Xi Jinping has agreed to cap emissions and move 20% of the country’s energy consumption to alternative fuels by 2030, not to please the international community or to pull a fast one on Americans, but to avoid a revolt in his own smog-choked country. It’s called self-interest.”

And so China, facing the scientific, economic and political realities of climate change, is now an uneasy ally in the Obama administration’s “war on coal.” Pretty much every developed nation and even a few of the developing ones are coming around to the real human and environmental costs of burning dirty, toxic fuels like coal and are working to reduce carbon emissions, both for the health of their people and the planet. The party that will soon control the legislature of the most powerful nation on earth, however, remains unconvinced.